Brittany Diamond is a strong woman, and I don't know many men who are stronger. When we first met a few weeks ago, Brittany told me about her last deadlift set: 315 lbs. That's nearly double her body weight. She said it felt "light and easy."

Brittany might be strong, but she's definitely still girly. When we sat down to chat, I wondered how she found the time to style her long blonde hair into perfect soft waves. She apologized for her messy make-up, which was still more put together than mine on my best day.

And then there was the pink. From head to toe, fingernails to socks, Brittany Diamond was wearing a lot of pink.

"You know it started with rowing," Brittany told me. "I was like, alright, I’m just going to wear all pink all the time. It is my favorite color and it just kinda stuck with me and it’s almost like a joke now. You know what, some people wear all black to intimidate people. I’ll wear all pink. It works for me.

A lot of times when people think of strongman they don’t think of women. Back in the day it was all men doing this, and it’s just really cool because people look at you and they’re like, “You can do what?”

I’m not a bodybuilder, that is the complete opposite. My sport has nothing to do with aesthetics, which is why I love it. Which is another reason why I also think it’s empowering. A lot of men, in particular, are intimidated by that, and that’s fine because my mom raised me to be strong, do whatever the men can do. I have two brothers. People think, 'you’re a little crazy,' but I’m fine with that."

Brittany started training as a strongwoman in July, as soon as she finished college and was no longer committed to her school's rowing team. She works in marketing and sales for a start-up company, and her boss used to be a weightlifter, so he gets it. 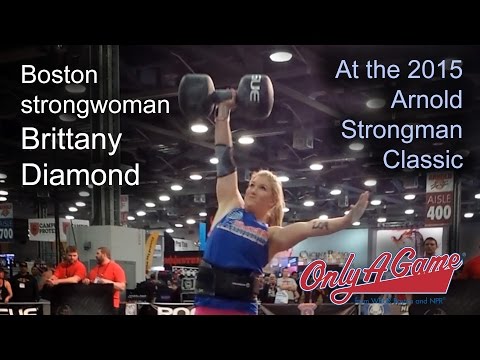 Three days later, Brittany and I met up again. Her voice still hadn't recovered from the travel and lack of sleep and, oh yeah, the emotions of competition.

"I think I accidentally swore," Brittany said apologetically. "And I'm so sorry. So embarrassing. You’re just in a different level. Like you can’t really control your emotions when something like that happens. I was, like, crying and screaming and obviously normally I wouldn't swear, but I was just, like, I was just flabbergasted."

Brittany Diamond is a strong woman, and there's nothing wrong with admitting that she cries.

[sidebar title="Anything You Can Do"] Only A Game's Doug Tribou has the story of a 14-year-old girl inspired by her favorite Red Sox star to play baseball with the boys. [/sidebar]"Oh yeah, it’s incredibly emotional for men and women," Brittany said. "You know when you put that much time and effort and dedication into something, and you really give it your all, certainly you’re going to get emotional. If you didn’t, then I don’t think you’re giving the sport your all."

Brittany's goal was to make it to the finals. The top four women qualified. Brittany came in seventh. Not bad considering her first day of dedicated training was a little more than eight months ago. Eventually, Brittany says, she'd like to win the Arnold. But more than that, she'd like to stay in the sport long enough to see women compete in a pro class, just like the men do. The sport's growing rapidly, Brittany says, so she's praying that development comes in the next five years.

Mike Foley of WCBE in Columbus contributed to this story.