"This story, it is my story," Sarah Marquis says. "And it is a story of a woman."

Marquis is an explorer, but she doesn’t scale mountains or jump off cliffs. She walks.

"The story starts a long, long time ago when I was a little girl," she says. "And I grow up in the northern part of Switzerland in an area where there was green, rolling hills. With my two brother, we were wandering all the time in the woods, foraging for mushrooms and amazing bird and little insects."

Marquis decided she wanted to spend her life this way.

So, she became an adventurer. That's her job: professional adventurer. One day, in between adventures, she went grocery shopping. On her way home, she found herself waiting to cross a busy road.

"So, I've been waiting and waiting and waiting, and I get sick of waiting. So, I turn around and behind me was this lovely little travel agency, an old one — it's been there forever. But on the window of that travel agency was one picture. And this picture was green, green, green as you can imagine. And this picture was actually a steppe, a Mongolian steppe. And then I came back home with my grocery shopping and all that, and I notice then that this picture actually grow inside me."

And when a picture grows inside Marquis, it really grows. That Mongolian steppe became just one stop on a 10,000 mile walk.

So, here's the plan. A car would drop Marquis off in Siberia. She’d walk from there through Mongolia and the Gobi desert, passing through China, Laos and Thailand. Once she ran out of land, she'd arranged to hitch a ride in a cargo boat to Australia, where she'd walk across the entire continent to its southern coast. 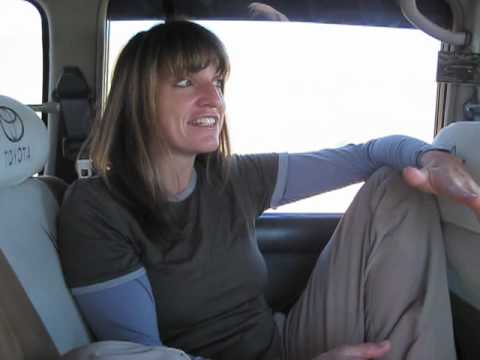 "And more specifically," Marquis says, "there was one tree in the south part of Australia when the land stops and the sea starts."

The tree is on a plain, surrounded by nothing. Its branches have been bent by the wind coming off the sea. Marquis “met” that tree before, on a previous adventure in Australia a decade ago.

Marquis prepared for her journey for two years, studying topographical maps, culture and languages. Preparing her body, her mind, and her equipment.

"And then one day, after two years preparation, you have to do one thing only," she says. "Do one step, the first step. It's the hardest one."

Marquis knew the weather would be bad. She knew conditions would be rough. She knew it would be hard to find clean water — or any water in places like the Gobi desert. But that beautiful picture of the Mongolia steppe — the one that started her on this journey — it had left out one very important detail. The humans.

That was the first time in my life that I can actually feel that I belong to that tribe of woman in the world.

"They try to take my gear, and I thought, 'I'm never going to get out of the situation, they're too drunk, you know, they're up to no good, they've been following me. I've got to find a solution here.' And instinctively I realize that the only thing that isn't drunk is the horse. The horse is not drunk. So, I yell at the horse, and I rise my hands in the air, and I scare the horse like crazy. The drunk Mongol men on the horse, they nearly fall down. And they lose their face, as they say in Asia. So, they turn around, and they run back home."

Drunken nomads were a problem. So was food. Marquis is a vegetarian, and in Mongolia, she says, locals mostly eat meat. One day, she came upon the town of Khojet. There was a tent at the entrance of the town, and lots of people were coming in and out of it.

"There was, like, horses on the front, tied up, and people there eating. So, I figured it out, there was actually a restaurant there. I was starving, of course, like... every day. There was two ladies there with big pots with food going on. So, anyway, I queue, and I get to those two ladies, and I ask for food. So those two women manage to give me a bowl of rice with a fried egg on the top — this is really big luxury. I say thank you, I pay and went back to my cart. And I eat that in two seconds and a half. So, I went back for more. And when I get in again, people start to look at me really angry. Like I've done something wrong there. And they start to yell at me. I don't know what I've done wrong, you know, because I don't understand. And then those two ladies behind the counter, they start to yell at me. And I was like, 'OK, OK I'm fine. I'm not going to ask for more food, right, OK.'

"I turn back, and I was thinking, I was like, no, this is not looking good. I'm hungry. I need food. I'm going back there. Whatever they're saying, I'm going to get that food in that pot. So I did. I came back there. And when I was ready to yell at those women, whatever language I will use, suddenly one of the woman, she look at me, and she had already ready the bowl of rice with this nice egg on the top. And she smile at me, and she smuggle this bowl of rice on this side, and nobody can see it.

"That was the first time in my life that I can actually feel that I belong to that tribe of woman in the world.  That was amazing feeling. We do have this magic link with woman. It's invisible and you don't need a language to understand it. Happens again, again and again. The next time after that was in the Gobi desert where that woman run after me to give me some cheese, fresh cheese. She just did, you know. And then it happened again in China where, you know, those really serious old Chinese woman on the front of the house? And then she would smile and give me a little rice and then come back to their position and not smile anymore. I think I've got out there so many mother, so many sister, so many aunties. They all recognize in me a member of their family." 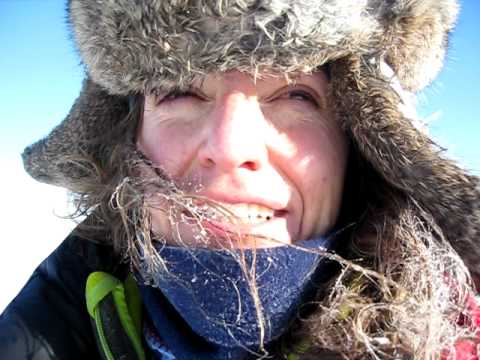 "Every country I wake up, I will open my tent, I will say, 'Good morning, Mongolia!' 'Good morning, Australia!' And make me laugh because when hard times come, laughing and having a sense of humor, it's a good tool to have in your bag."

At the end of every day, Marquis says she’d reminded herself, "I’m not lost. I’m on my way to the little tree.”

"When I reached my tree, five kilometers, which is three miles from the end, I stop. And I make a hole in the ground. I collect few twigs around, and I make fire. Small, little fire. And I use my teapot for the last time, and I make a little tea there. And I record this video where I say, 'This is my last tea.' And I'm sad. You can feel it. It's got no energy whatsoever.

"So, it's complicated. Arriving after such a long journey, it's an achievement. It's an amazing achievement. It's so much pain, so much sweat, so much danger. So much joy, also. So, you have to leave behind that life of this amazing connection with nature. I know, I need to make a transition to this real life here. And I know this transition is really not easy."

The walk from Siberia to the southern coast of Australia was supposed to take two years. It took three. But, Marquis says, this was a walk, not a race.

Sarah Marquis has a new book out about her 10,000 mile walk called, “Wild by Nature.”