Last Sunday, thousands of moths descended on the Stade de France hell-bent on stealing the stage from Cristiano Ronaldo, Antoine Griezmann, and the rest of the Portuguese and French national team players who had shown up for the finale of Euro 2016.

The swarm of Silver Y Moths was evidently the result of a strange decision to leave the stadium lights on overnight in preparation for the game.

Portugal won the contest, 1-0, despite losing Ronaldo to injury within the first half-hour of the contest. That injury, though, propelled one moth to eternal glory...

An extra-time goal from substitute Edér propelled the underdogs to victory, but, by many accounts, the quality of the football on display flattered to deceive.

Many a moth metaphor circulated the interwebs and front pages as journalists and pundits broke down the tepid contest. Let’s take a look at some of the best and worst...

Roger Bennett for the Men In Blazers Podcast:

“Unbelievably, a moth flickered down, I like to think, from heaven...  And it landed, softly, in his hour of pain, on Ronaldo's shiny Botox forehead, and it was as if a messenger from God herself had descended to whisper, quietly, into the Portuguese demigod's ear, ‘Leave the field you vain knob end.’”

“Here's a puzzler: what can be found licking up the tears from Cristiano Ronaldo's face one moment, and inching towards Didier Deschamps' balls the next?

The answer, of course, is a moth at the Euro 2016 Final. Yesterday's game at Stade de France was the scene of a genuine moth infestation – a plague, if you will – after the stadium's lights were left on the night before. This turned it into a beacon for every moth in the city and, having made the trip, they thought they'd hang around for the big game. Unfortunately, it was a total let-down.

In fact, the moths were one of the highlights of an otherwise drab encounter.”

Patrick Barkham in The Guardian:

“It will forever be remembered as the moth balls final: a rather drab climax to Euro 2016 enlivened by a swarm of moths.”

“Portugal and France fans may have taken the time to adequately brace themselves for a Euro 2016 closing ceremony featuring David Guetta, but the final took a surreal turn as the pitch was invaded by a swarm of moths.

Referee Mark Clattenburg was seen wading through the insects before the match, but officiating legend Pierluigi Collina was not so lucky.

The former referee looked distressed as he batted away the insects, who clearly had no respect for his standing within the game.

Clattenburg's assistant Andre Marriner took a gentler approach to the invading moths, who took up home on the goal nets and corner flags on the hot summer evening.”

“Portugal are champions. We look at the aftermath—the “aftermoths” if you will—at the Stade de France…Pre-match they build themselves into a larva, they had some early flutters, and they took wing into the face of destiny.”

Some puns were better-conceived than others:

And ‘Mothaldo,’ AKA that moth who landed on Cristiano Ronaldo’s face as he lay injured, earned his own Twitter account.

Not The First Time

Moths aren't the first insect to intrude on a recent international soccer tournament. Far more singular, and potentially more startling, was a cameo from a grotesquely large locust at the World Cup in 2014.

And, let’s show solidarity with the moth-fearing European public by taking stock of our own insect-related sports incidents of recent memory.

In a 2007 playoff game between the Yankees and the Indians, a thick cloud of midges fell over Jacobs Field in Cleveland. The swarm, suffice it to say, disturbed Yankees reliever Joba Chamberlain. 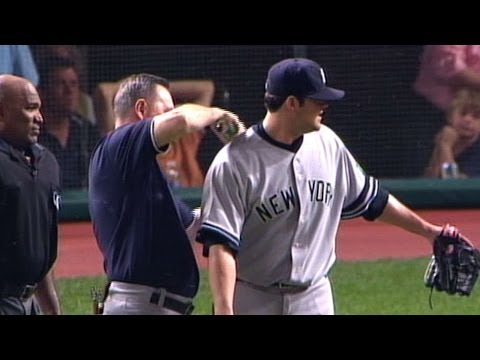 When Chamberlain signed with the Indians in 2015, the squad issued a belated apology.

Meanwhile, bees have proven to be MLB spring training's token sign of the apocalypse. They caused havoc at multiple games this spring, and seem to really have beef with the Kansas City Royals.