Most of the world’s best archers have a couple of things Matt Stutzman does not.

"I was born without any arms," Matt says.

"There was no medical reason for why I was born this way," Matt says. "My parents asked the doctors what it was gonna take for me to live, and my doctors told them that it was going to cost millions of dollars for them to raise me. And so, at three months old, they put me up for adoption. At 13 months old, an amazing family walked into my life. They took me out to eat and my three older siblings were sitting around the table and were watching me eat. And at the time, I guess, I stuck my face in my food. I didn’t know how to use my feet properly. And my Dad just said, 'Look around. You know, look at everybody staring. Is this something that you guys are going to be able to accept? You know, you might be picked on because he’s different.' And they said, 'We’d love to have him.' And so they adopted me."

Adapting From An Early Age

Stutzman was born in the early '80s, when attitudes toward people with disabilities were different than they are now. But Matt’s adoptive family knew what he needed most.

"Growing up, I was treated like every other normal kid," he says. "I had to do chores. Had to gather eggs. Feed the cows, feed the chickens. I said, 'Dad, I want to climb an apple tree!' And he goes, 'Absolutely! But if you climb up it by yourself, you’re going to have to climb down it by yourself. We’re not gonna just come in and rescue you.' So I climbed the apple tree, and then I had to figure out how to climb back down.

"They let me ... they let me fail a lot. Because of my parents teaching me to look at a situation and learn how to adapt myself to it versus adapting the world to me, I was able to, as I got older, accomplish the things I’ve been able to accomplish."

Matt’s dad and brothers went on hunting trips together. When Matt was 16, his dad bought him a bow so he could join them. But before he could teach himself to shoot it very well, it was stolen. The family didn’t have enough money for a replacement.

About 10 years later, Stutzman was married with kids. And times were tough.

"I can’t find a job," he says. "And I didn’t really feel good as a man. I was in depression, 'cause here I am, supposed to take care of my family. And my wife is the one working full time, and I can’t help. And I tried to apply at jobs, and people would tell me 'no' all the time. I had people say, 'If you had prosthetic arms, I would hire you.' I ... last time I had prosthetic arms, I was, like, six, and I think I wore them to show and tell."

"If you were to go into my house right now, besides a picture on the wall, there’s nothing in the house that would lead you to believe that there’s a gentleman without arms that lives there."

And here’s where archery comes back in.

"I was sitting on the couch one day, and I saw this show come on TV. And they were using bows to go hunting. And I was, like, 'That’s what I’m gonna do! I think I can get a bow and put food on the table,'" Matt says. "I purchased my bow. I did Google 'How to teach an armless guy how to shoot a bow,' and nothing came up. Started watching YouTube clips on how to shoot, and within a couple days, I was shooting pretty decently. And actually went out that year and harvested a couple deer.

"I was excited now. I found a purpose to my life. I wasn’t depressed anymore, because I now was putting food on the table and feeling like I was contributing to the family."

An Archer With No Arms

By this time you’re probably wondering "How does an archer with no arms shoot a bow?" Everyone’s curious when they hear about Matt Stutzman.

"I grab my arrow, which is usually laying on the right side of the bow, on the ground, and I grab that with my right foot. And I will put it into the bow and snap it onto the string," Matt explains. "Once I do that, I grab the bow with my right foot, and at this point I push my right foot away from my chest."

The only modification Matt uses is a belt that goes around his chest to hold a release aid.

"It releases the string, and it shoots the arrow toward the target, hopefully hitting a 10," Matt says, chuckling.

By early 2010, Stutzman was hitting enough tens and putting enough venison on the table that one of his friends told him ...

"So in February of 2010, I went to my first tournament, walked in and asked where the other armless archers were, and found out I was the only one in the world that shot that way."

'The Best Archer In The World'

Things might have stayed that way, and he might have been happy with that, until he took a new bow a sponsor had given him to his friend’s house.

"And I had my friend tell me that, 'The reason why they sponsor you is because you have no arms, and you draw attention to their product. And it’s not because you’re good,'" Matt says.

"The reality was that I wasn’t that good. I was considered, kinda like a sideshow. It was a new thing, nobody had seen a guy without arms shoot a bow before. And that didn’t sit too good with me. So that was the day I decided that I wanted to be known as the best archer in the world, followed by 'Oh, by the way, did you know he does it with no arms?'"

Stutzman began practicing eight hours a day, every day. He entered the 2011 Vegas Shoot, the biggest tournament in the world, where the best able-bodied shooters from around the world compete for big cash prizes. But while he was there, he learned about yet another opportunity

"I had a guy come up to me and say, 'Wow, you’re really good. Have you ever thought about participating in the Paralympics?' I’m, like, 'What is that?'" Matt says, laughing. "The next thing I know, it’s 2012 and I’m getting ready to shoot the Paralympic trials. And I ended up winning all trials, earning the number one seed for Team USA in London.

"Went to London, not expecting to podium, and found myself in a gold medal match, and was outshot by a guy from Finland, earning the silver medal."

That guy from Finland was Jere Forsberg. He’s confined to a wheelchair, but he has full use of his arms. I asked Stutzman if getting beaten by an archer with arms irked him. He said it didn’t. In fact, Stutzman says, he wants to compete against the best archers in the world, whoever they may be. What did irk him was that he felt he was the better archer that day.

"In fact, on the podium, I told him, 'You’re never gonna beat me again,'” Matt says. "He didn’t understand English, and so he agreed with me. We’ve met several time in international tournaments, and I haven’t lost to him since.

"I ended up accomplishing the No. 1 rank in the world on the Para side in 2013. Two years ago, I did actually earn the 11th ranking in the world, able-bodied. Which I thought was awesome, you know, to be considered the 11th best in the entire world."

Stutzman thought, 'What if the 11th best archer in the world set a new world record?' So on Dec. 10, 2015, he attempted the longest accurate shot to a target. The distance? Just a shade over 930 feet. That’s more than three football fields. The target has a diameter of just four feet.

"I shot 30 arrows that morning for practice and warmup, and out of the 30 arrows that I shot, I didn’t hit the target once," Matt says. "At 11:30 a.m., the gentleman from Guinness comes out. And I sit down in my chair, and I aim at the target and I shoot. My first attempt, I shot and I missed a foot high. I aim again, and I shot. And I hit the target. 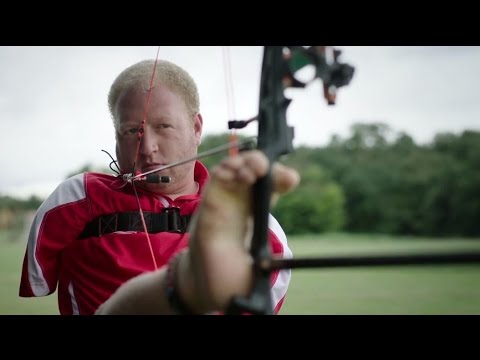 "I was super excited, jumping around, and to my knowledge, to this day nobody has been able to break that record."

After Stutzman lost in the round of 16 at the Rio Paralympics, he reevaluated. He wants to compete in the 2020 Paralympics in Tokyo. But he’s taking a hiatus from the U.S. Paralympic team. He wants to qualify for the able-bodied team and compete against the world’s best archers.

He’s always lived by the lesson he learned as a newly adopted kid: that to accomplish what he wants to, he needs to adapt. He’s done that for too long to have it any other way.

"If you were to go into my house right now, besides a picture on the wall, there’s nothing in the house that would lead you to believe that there’s a gentleman without arms that lives there. I have no modifications in my house whatsoever. I drive a normal car, with my feet, that’s not modified. And I do have a valid license to drive that. I don’t consider myself a person with a physical disability."

Learn more about Matt's story on his website, mattstutzman.com.