This story originally aired on Apr. 16, 2016. This week it appears again as part of our "Archenemies" show.

Walton played through chronic pain during his three-year college career with UCLA and his 10 seasons in the NBA with the Trail Blazers, Clippers and Celtics. Twenty-two years after his retirement from the pros, the pain had become much worse. That led him to despair.

"There’s no reason to believe that tomorrow is going to be any better. If I had a gun, I would use it."

Happily, he didn’t have a gun. Walton provided me with a short history of his long list of orthopedic problems.

The rewards for the price Walton paid included two national titles with UCLA and then an NBA championship in 1977 with the Portland Trailblazers when Walton was just 24 years old.

Lots of players would envy those accomplishments. But the young Walton wanted more.

"I wanted to be the best. I wanted to win everything. And I idolized [Bill] Russell, Wilt [Chamberlain], Oscar [Robertson], Kareem [Abdul-Jabbar]. But my body would not carry me to my dreams. On April 18, in 1978, when I was the Most Valuable Player in the NBA, I took a pain-killing injection in my foot. And when I went out and tried to play on another broken foot with a pain-killing injection, the bone in my foot, it split in half. And I spent the next eight years of my life chasing the dream."

'The Most Depressing Feeling'

Walton reunited with that dream as a member of the 1986 Boston Celtics. They beat the Houston Rockets in the Finals. That team featured fellow future Hall of Famers Larry Bird, Robert Parish, Kevin McHale and Dennis Johnson. 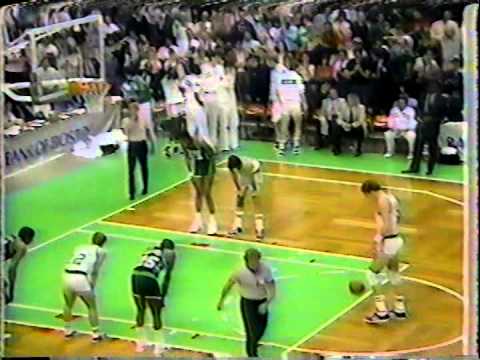 Walton, then 10 years beyond his MVP season, was still with the team the following year, when the Celtics were losing to the Lakers in the Finals. He was in uniform, but his injuries kept him on the bench.

It’s just so desolate, and it’s dark and things are spiraling helplessly out of control and there’s nothing that you can do. And it’s just the most depressing feeling in that you’re letting your guys down.

Bill Walton on being injured during the 1987 NBA Finals

"And I can’t play. I haven’t been able to play all year, because I have another stress fracture in my foot. And I can’t go. And all I wanted to do was help the team win, and I couldn’t do my job. And so the fans in the Garden, they just were cheering and chanting and wanting me to get back out there as if it was a matter of effort. And every time I used my foot, the bone would break more. And so, I’m standing there on the floor in my uniform, the critical moment of the series, of the championship, of the game. And the fans are chanting my name, and it’s my turn.

"But while I’m standing there on the court, I’m just so alone. And it’s just so desolate, and it’s dark and things are spiraling helplessly out of control and there’s nothing that you can do. And it’s just the most depressing feeling in that you’re letting your guys down. You’re letting your team down. You’re letting your town down. And so while I’m there, the fans chanting, 'Walton! Walton! Walton!' — the place just reverberating — Dennis Johnson came up to me, and he put his arm on my shoulder, and he inched up and he whispered in my ear, 'Don’t do it, Bill. Don’t do it.'"

Bill Walton’s NBA career ended in 1987, and he did some math. Over the last nine years of that career, he’d not finished a single season able to play. Happily, he retained enough of a sense of humor to smile at how relatively fortunate one of his contemporaries had been.

"I went as an invited guest to Kareem’s 50th birthday party and I hadn’t seen him in a little while. And he shows up with a cane and an orthopedic boot on. Kareem! The most durable athlete you’ve ever seen. I mean, never missed anything. And he’s got this cane and a boot. I said, 'Kareem, what happened? You haven’t played basketball since you were 42! You’re the first 20-year player in the NBA! What happened? How could you possibly have gotten hurt now? What were you doing?' He said, 'Oh, man, Bill. The doctor, he had to carve on my little toe. And it’s really, really painful!' And I said, 'So, Kareem, how many operations is this for you now in your life?' He said, 'Bill, it’s my first one.' I’ve had 37 orthopedic operations."

A New Lease On Life

Walton had his worst days well after he’d stopped playing basketball. After collapsing as he got off an airplane, he spent much of 2008 flat on his back, unable to get off the floor. In 2009, he sought help in innovative spine surgery.

"I was lying in that hospital bed Feb. 8 of 2009, and going to go underneath this incredibly risky and tough surgery. And I’m lying there, and I’m thinking, 'I’m not coming out of this. And you know what? I don’t care if I don’t come out, because this is just not worth it.' And the doctor, Steve Garfin, he’s patting my hand next to the gurney. And I’m all hooked up to all the tubes and everything. And Dr. Garfin is saying, 'You know, I’m going to do my best. There are no guarantees.' And, oh my gosh, I was so afraid. And I just had tears, and I thought it was over.

"And so as I hear Dr. Garfin call out across the room to the anesthesiologist for the count to start the drip — I’ve had a lot of operations, I know what that command means, and I’ve only got a few seconds. And so as the anesthesiologist — I can hear his voice from across the room as he starts it, and I can feel it coming into my veins. Ten, nine... And I reached out with whatever and little strength that I had and I grabbed Dr. Steve Garfin’s forearm. And I looked up at him, I said, 'Please, doc. Please fix me. Please save me. Please give me one more chance.'"

The recovery from that eight-and-a-half hour surgery required an induced coma, months on powerful painkillers and tedious rehabilitation. And how’s he doing now?

"I am just doing fantastic, and to be in a life now, where I have no pain, I take no medication. I’m 63 and I’m just getting started, Bill. I’m the luckiest guy in the history of the world."

Bill Walton’s back at work as a TV basketball analyst. He swims a lot at the San Diego Y. He says, with an enormous smile, that he’s in love. He smiles a lot these days, no doubt because, for a long time, he felt he’d never smile again.