This article is more than 4 years old.
Story continues below

A few weeks back, I was playing basketball just across the street from the Only A Game office at the Boston University gym. The thing you've got to know about the BU gym is that there's a hierarchy: The first court is for the best players. It goes down from there.

I was playing on the second court, and one player on my team stood out immediately. He was dressed in red and black Portland Trail Blazers colors. He wasn't a particularly big guy, but I could tell by his shooting stroke and his handles that he was a serious player.

With his help, our team won the first game. We were ready to run it back, but then we noticed the guy in red and black was missing.

But only temporarily. I soon found him on the first court — in the middle of a game. He'd been called up. I figured that was the end of the story, but it wasn't.

Later that night, as I was getting ready to leave, the guy in the red and black came over to introduce himself. His name was Saiyuan Bian.

Bian grew up in Beijing. He fell in love with basketball when he was 6 1/2 years old. That’s when he first saw "Space Jam."

"After I saw that movie, I think basketball is really fun," Bian says. "You know, like, ‘Maybe I can fly if I play basketball, and I can go to moon, you know, out of the Earth.’ "

A reasonable expectation for a 6 1/2 year old. And, to be fair, the game has taken Bian pretty far.

A Message From God

As a kid Bian played at nearby rec centers. By the time he got to high school, he couldn’t be without the game for very long.

"I played in the morning, and during my lunchtime, I just used lunchtime to play basketball," he says.

Bian played through high school and ended up on a junior pro team. But clubs in the Chinese Basketball Association, or CBA, weren’t interested. As his 21st birthday approached and he was about to age out of juniors, Bian thought about giving up on basketball. Until he got a message from God.

God Shammgod, a former second-round NBA draft pick, was in China playing in the CBA and teaching clinics. Bian attended one.

"He walked up in front of me and say, 'Bian, you are good. He got handles,' " Bian recalls.

Shammgod picked Bian to be his partner for a demonstration. This was big, because Bian’s coaches didn’t usually give him this sort of encouragement.

"After practice, I speak with him with my poor English," Bian says. "I said, 'You know, I want to play.' And he said, 'You should continue play. You're really good. Maybe you can go to U.S. to play ball and learn English.' He gave me so much confidence."

The following year, an agency in China helped Bian get accepted to Menlo College in Silicon Valley, a small school that competes in the lower-level National Association of Intercollegiate Athletics.

I asked him who he talked to in the U.S. before making the trip.

"Ah, nobody," Bian says with a laugh.

In January 2008, Bian hopped on a plane headed for San Francisco.

"I remember I arrived at 4 p.m. or 5 p.m.," he says. "And it’s kind of like a raining day. No sunshine. Not warm. People speaking English, which is, I don’t understand at all. I told myself, 'I need to find a Chinese guy ... looking for help.' I saw one guy who looks like Chinese, and I go up to talk to him in Chinese. 'I need some help. Can you tell me how can I get to to my school?' "

Turned out, the guy was headed to Stanford, and Menlo College was on the way.

"He said, 'We can go together.' And we both took the super shuttle," Bian says.

The basketball season had already begun, and the coaches told Bian he would have to wait until next year to tryout. In the meantime, Bian spent his first semester in language school and, as should be a surprise to no one, practicing in the same gym where the team worked out.

"So in their mind they know there’s a Chinese guy that wants to play on the team so bad," he says.

His plan worked. Just before the school year started back up in the fall, the head coach handed Bian a jersey and a spot on the team. Bian says he almost cried.

But his transition onto the team was frustrating. Bian says he was "definitely a bench player."

"Because, during that time, my English is really poor," he says. "I don't even know the plays very well. I don't know what they are saying. I don't understand except, 'Let's go.' "

Slowly, Bian got more playing time. He became closer with his teammates, too. But the following year he got injured and had to sit out. And that didn’t put him any closer to becoming a pro.

Instead of giving up, Bian came up with an even crazier plan. It hit him that March.

Bian was watching March Madness and saw the best Div. I teams in the country competing. He wanted to be a part of that. It just so happened that one of Bian’s teammates was from Lawrence, Kansas, home of the Jayhawks, who had won a national title in 2008. He told Bian to check them out.

It might seem like an audacious plan: things aren’t working out on a low-level college team, so aim higher. Bian told his teammates he was transferring.

"And they were all saying, ‘For what?,’ " Bian says. "And I said, ‘For basketball.’ They just, you know, they think I’m, like, an idiot or have something wrong with my mind. And, uh, they just feel, ‘Bian you need to go to a mental hospital.’ "

Instead he went to Lawrence, Kansas.

Bian befriended eventual top-10 NBA draft pick Ben McLemore, rebounding for him for hours. His goal was to try out as a walk-on.

"I went through the tryout, but they didn’t take anyone," he says.

But before Bian could leave, the coaches stopped him and one other guy.

"They said, ‘You two guys can be, you know, practice players.’ And at that time I was so surprised," he says.

Whenever the coach called, Bian showed up at the Kansas gym. He and the other practice players usually came on when fresh legs were needed to play defense during drills.

Bian served the role two years, and then he graduated. NBA teams weren't exactly interested in a Kansas practice player, but Bian wasn't ready to give up on his dream of playing pro ball. So, it was back to China, and another round of tryouts for teams in the CBA.

'Do You Want To Be A Translator?'

It was the lowest Bian had been. After half-a-dozen tryouts, no one wanted to take him. But two days later, the last team he had tried out for called him.

"They were saying, ‘Our team translator just left. Your English pretty OK. Do you want to be a translator?' " Bian recalls.

The team, Jiangsu Tongxi, told Bian if he took the job he could use their facilities to keep working out. And, maybe next season they would give him another chance. So Bian took the job and started working with the import players who needed to get around the city. It was a reliable gig that kept him close to the game he loves.

"I feel they love the game from the deep, just like when I was 6 1/2. I can't really, you know, have a physical ability like them, but the way we love the game is the same."

Saiyuan Bian on the NBA players he translates for

I asked him how he really felt as a translator, whether he still felt like part of the team, even though he wasn't a player.

"Yeah, I feel I’m a part of the team," he says. "But there is one feeling that I feel so bad, is I’m only 1 feet away from the dream. Because I couldn’t stand in the court. But I stand off the court, right there, and right besides of the coach."

Bian had always impressed those around him with the amount of practicing he did on his own time. And, just like every team before, Jiangsu Tongxi gave him a chance. They let him practice with the team in the summer and then even sent him to the CBA developmental league to get game experience.

When it came time to re-sign his contract as a translator, Bian got an upgraded offer.

"They said, 'Oh, we are going to offer you, you know, half-and-half, you know, translator and player’s contract,' " he says.

But when the season began, Bian never left the bench.

"So, I was kind of like, you know, this may be just a joke, or I will probably never going to play," he says. 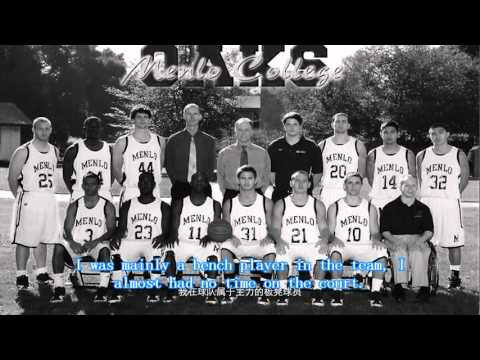 Bian sat for the first 20 games of the season. But for the 21st game, the team was playing in Beijing, Bian's hometown. The coaches told him to be ready.

Before the game, he was nervous. He tried to recite plays to himself to focus and calm down.

"I was so afraid to play bad in front of my parents, friends and hometown," Bian says. "My heart beats too quick. I almost pee myself — almost."

Bian was subbed in during the first quarter. And then it happened. He came up with a loose ball.

"And I start dribbling from our free throw line and I keep, like, pushing the ball," he says. "Coast-to-coast, I make a Europe-step — I made the layup. I was kind of screaming a little bit after I made it. But I didn’t really mean to do that. I just feel I have so much pressure I need to release out."

The layup was Bian’s only bucket of the game. And even though his team went on to lose by almost 30, it was the biggest shot of his life. The excitement didn’t stop there, though. In his next game, Bian came off the bench to score seven points in 12 minutes. He played in three more games that season, even getting to start.

And although Bian hasn’t fulfilled his dream of playing in the NBA yet, sneaker companies have paid him to translate for NBA players, and he’s gotten close with some of them.

"I been translating for Derrick Rose, Damian Lillard, my favorite, Stephen Curry," Bian says. "All those players become, like, into my life. And I just feel whenever I’ve been talk with those superstars, I feel they love the game from the deep, just like when I was 6 1/2. I can't really, you know, have a physical ability like them, but the way we love the game is the same."

Bian’s love for the game has kept him chasing that NBA dream. He’s a 29-year-old free agent, and he wants to try out for the NBA’s developmental G League. I ask him, though, if he’ll keep translating.

"Translating, coaching — it’s all my passion," he says. "Yes, as long as related to basketball, I will be fine."