"Whitey" Von Nieda played one season in the NBA.

"My real name is Stanley. But nobody ever called me that, I think, while I was playing," he says.

At 97-years-old, he’s the oldest man alive to have played in the league.

In 1947, Von Nieda was approached by Leo Ferris, owner of the National Basketball League’s Tri-Cities Blackhawks. He offered Von Nieda a $2,000 signing bonus to move from Lancaster, Pa. to Moline, Ill. to play ball.

"We hammered out a deal, and I — I finally went and played for him," Von Nieda says.

At the time, the National Basketball League, or NBL, was facing competition from the BAA, the Basketball Association of America. "The upstarts," Von Nieda calls them. Each league was trying to put the other out of business. But Von Nieda says, the players weren’t worried.

"No, we were happy for it, because we figured they'd be trying to get ball players. And the price of our contract would go up," he says.

In August of 1949, the two leagues merged. And in October, newspapers announced that the Tri-Cities Blackhawks would face the Denver Nuggets on October 29, 1949 in the "first game in the history of the new National Basketball Association."

Von Nieda played for the Blackhawks, so I figured he’d still remember what he was doing on that day, 70 years ago.

"So were you there for that game, just not on the court?" I ask.

Von Nieda was so sure, I figured I must have been wrong. But I looked it up. His team definitely played in that game. And so did he. In the paper the next day, Whitey Von Nieda was listed as the second highest scorer for the Blackhawks with 14 points.

Maybe Von Nieda just forgot? He is more than twice my age, and I can’t remember what I was doing last Tuesday. Or maybe there’s something else going on? Because for the past six decades, the NBA has been celebrating a different birthday.

In a move some sports historians have suggested might be an "intentional erasure" of one of its two founding leagues, the NBA has instead celebrated a game played three years earlier, on November 1, 1946,  as its first.

Sean Kirst, a columnist for the Buffalo News, disagrees.

Kirst has written about the discrepency over the league's founding date. He became aware of it while working on a different story.

"So the deal is, years ago — many years ago in Syracuse — a woman calls me and says that her husband deserves a lot more credit in basketball history, particularly with the 24 second clock," Kirst says. "And it was Beverly Ferris.

If this is sounding a little familiar, it’s because Sean helped tell the story of Beverly, her husband Leo and the 24-second clock on our show a couple years ago.

"And I go to her house, and she pulls out a grocery bag full of clippings, and, you know, it was old scrapbooks. And so I'm fishing through this grocery bag, and I pull out a yellowed clipping that shows Leo, Ike Duffy of the Anderson Packers, Ned Irish of the New York Knicks, and Walter Brown [of the Boston Celtics] with Maurice Podoloff, the first president of the NBA. And they're surrounding a basketball on Aug. 3, 1949. And this article says, 'This is the birth of the NBA.' And I'm stunned."

The Birth Of The NBA

Kirst wasn’t stunned because of that date, Aug. 3, 1949. He was stunned because Leo Ferris, husband of Beverly, who by that time was unable to speak and dying of Huntington’s disease, was at the center of the photo.

"I mean, Leo's there. He's in the middle and helping to put together this new league," Kirst says. "And it turns out that he played kind of the Al Davis role. He was the guy who went out and signed players out from underneath the BAA. And then, you know, I start writing about that."

A couple years ago, Kirst started writing for the Buffalo News. And he figured the 70th anniversary of the day that photo was taken would be a good time to introduce his new readers to Leo Ferris, who founded the Buffalo Bisons, the team that later became the Tri-Cities Blackhawks and, eventually, the Atlanta Hawks.

"And so I contact the NBA," Kirst says. "And I say, 'What are you doing for your 70th anniversary?' I'm totally naive. And I'm initially met by silence. And then I get an e-mail back that says, 'Well, our 75th anniversary is in 2021.' So I do some math, and it doesn't compute.

"You know, it's like, 'No, it's not.' And it's utterly nonsensical. It makes no sense. And so that leads into all of this."

According to the NBA, the league's first game was on Nov. 1, 1946. So what actually happened that day?

"Well, that was the beginning of the Basketball Association of America," Kirst says.

The Basketball Association of America

Unlike the game Whitey Von Nieda played in, this first game — this first basket — has been celebrated. They even made a documentary about it. 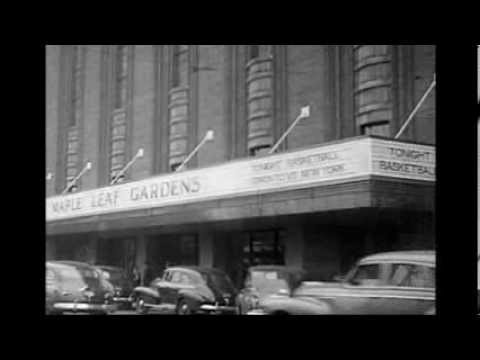 "The BAA — it's a bunch of rich guys in big cities who start a league in 1946," Kirst says. "But there is already a professional league called the National Basketball League. So the BAA sets out to sort of become basketball's major league. But they've got this problem of this other league that's got better players."

"These two leagues go to war," Kirst says. "And, you know, the BAA's got more money, but it's a war of attrition, and no one's doing that well."

In 1947, the BAA used that extra cash to lure four teams away from the NBL.

"So two of the teams that jump are Minneapolis [Lakers] and Rochester [Royals], who will become the dominant teams in basketball's early history," Kirst says. "So at that point, the NBL appears to be staggered. But Leo Ferris, who has founded this team in Buffalo and then moved it to Moline, goes out, basically, to wreak vengeance and to try and force a merger.

"And so in 1948, he signs a Dolph Schayes, which is sort of a titanic signing. And he signs him out from underneath the Knicks. And Dolph is a huge star. And then a year later, Leo goes out and just signs the starting five from Kentucky and gives them a team. Gives them a team in Indianapolis."

When Kirst says Ferris “gives” Kentucky’s starting five a team, he means that literally. The players got ownership. And that was a huge threat to those rich owners in the BAA.

"And so the BAA is a little shaken by this, and Maurice Podoloff finally says, 'OK, we're gonna sit down and put an end to this,' " Kirst says. "So they finally come to the table. And, in 1949, they merge. And they create the National Basketball Association. And I defy you, if you go into old clips, to find a clipping from that period that does not say that it was a merger that created a new basketball league."

"I think it's the Syracuse newspaper [that] has a headline that says, 'NBL and BAA Merge To Create National Basketball Association,' " says Curtis Harris, a doctoral student in history at American University. He also runs the website and Twitter account, Pro Hoops History.

"Newspaper articles, journalists, basketball folks at that period are saying this is a brand new league," Harris says. "It's starting at this moment with the combination of two previous leagues."

And Harris says that’s how everyone talked about the NBA — as a brand new league — all during that first season and on through the 1950s. But in the 1960s, the narrative changed.

"I would say, unfortunately, as time has gone on, the people associated with the NBL — that half of the NBA's parentage — they slowly lost, I guess, their power to help keep alive and tell these stories," Harris says. "And the folks from the BAA side of things, they got greater and greater power over the narrative and have been able to just, in essence, rewrite the origins of the NBA."

"The BAA had a little bit more in the way of financial resources," Kirst says. "They had an office in the Empire State Building. So, you know, Podoloff remains as president. And it's interesting. Podoloff had some quote like, 'We'll bury you.' Or something like that. And they did it historically. The real crime of this, the real shame of it, is that it's a 70 year old grudge that's still being played out."

So, what’s the big deal? Why does it matter whether the league was founded in 1949 or 1946? Whether it was a merger or, as the NBA now claims, merely a name change?

"Well, for starters, you know, if they wanted to incorporate both of those two leagues into the history, the NBL was founded officially in 1937," Harris says. "So if the NBA recognized the NBL, it'd add about 12 years to its history."

As Harris and Kirst both argue, by ignoring those 12 years — by rewriting history — the NBA is allowing people who were important to the early days of the game to be forgotten.

People like Leo Ferris. And Pop Gates, the African American player Leo signed to play for the Tri-Cities Blackhawks in 1946, six months before Jackie Robinson integrated Major League Baseball. Or the six black players for the Chicago Studebakers, one of two majority black teams that started the NBL season in 1942.

"And that's absolutely something that would not occur in the NBA until the mid- and late-1960s where you had a majority black team," Harris says. "If the NBA incorporated the NBL, you'd get this great racial history, these great histories of these smaller towns that incubated basketball and made possible what happened in the NBA.

"Just many great players that have kind of gotten forgotten and don't even get into the Basketball Hall of Fame anymore, because the NBA doesn't recognize the NBL."

The Hall Of Fame

When Sean Kirst sat down to write that column about Leo Ferris, the Buffalo Bisons and the NBA’s 70th birthday, he thought maybe he could get the attention of the Basketball Hall of Fame to remind them again about Ferris. But…

"I called them and said, 'When was the NBA born?' And they just didn't comment," Kirst says. "I'm not kidding you. I couldn't get a comment out of the Hall of Fame about this.

"So, if the Hall of Fame is not acknowledging that the NBA was created on August 3rd, 1949, then what does that mean for the people who took part in that creation? Well, it means that they didn't do it, right? And that's just bizarre. And it's a loss to me."

So, if the NBA were to acknowledge that it's been celebrating the wrong birthday, what would happen to the NBA history that we know? The NBA has an origin story with Ossie Schectman and other Jewish men at the center of it. And there's a community that's proud of that history. How do we find a way to acknowledge what really happened, while still acknowledging those contributions?

"It doesn't seem to me that it has to be an either/or thing," Kirst says. "I don't know if you just expand record books. I don't know how you do it. You just open the door.

"The BAA was an incredibly important, seminal basketball league. That's true no matter what. And it led to the creation of the NBA, as did the NBL. So there's no disrespect in making that point, and just saying, 'Hey, on this moment in time, this is when this new league was born.' "