Richard Askwith is a journalist with a story to tell. He’s pretty sure you’ve never heard it before. It’s about Czech athlete Lata Brandisová.

"Her story's been erased from history. And I think her story deserves to be restored to public knowledge," Askwith says.

From Nobility To Horse Racing

Countess Marie Immaculata Brandisová was born in 1895 to an aristocratic family in what was then the Austro-Hungarian Empire. Richard Askwith says the countess, known to family and friends as "Lata," discovered her calling at a young age.

"Her father kept horses and trained horses," Askwith says. "And he realized when she was even 6 or 7 that she just had this gift. She could communicate with horses. They loved her, she loved them. She was brave, she was tough, she was athletic."

In other words, Lata had all the qualities to be a competitive steeplechase rider in a place and time when steeplechase was the most closely watched sport. The only problem was that steeplechase races were sanctioned by the Prague Jockey Club, which didn’t allow women to compete. But the empire collapsed at the end of World War I.

Lata, now in her early 20s, became a citizen of the newly formed Czechoslovakia, "which is this sort of beacon of Western democratic values in the heart of Central Europe," Askwith says.

The Czech constitution guaranteed certain rights for women. But, instead of waiting for horse racing to welcome women, Lata jumped on her bike and made regular 12 mile trips from her home near Prague to Velká Chuchle racecourse. There, she talked with trainers in the hope she’d get a chance to work with them.

"And there was one particularly good trainer who realized that she did have this amazing way with horses, and let her have a go," Askwith says.

Lata began exercising horses. Soon, she was competing in harness races. But she wanted more than anything to compete in steeplechase, and especially in the Grand Pardubice, Czechoslovakia’s most prestigious sporting event.

"Which is this extraordinarily dangerous, arduous, demanding steeplechase set up by the aristocracy in the 1870s as a test for cavalry soldiers," Askwith says.

Soldiers from Czechoslovakia, France, Austria and Germany would compete.

"It's a big, long course. It’s four and a bit miles. It winds in all sorts of zigzags," Askwith says. "If you're tough enough to ride this race, you're tough enough to go to war. But, of course, it was absolutely out of the question that, in this very traditional, very old-fashioned society, for a woman to do anything like that."

But, in the spring of 1927, the Prague Jockey Club had a new president, a man who knew about Lata’s abilities. He helped her acquire a jockey’s license and urged her to enter that year’s Grand Pardubice.

"It caused an absolute scandal," Askwith says. "Because all the people she was riding against were cavalry officers."

"And when she was given the go-ahead, they were still protesting on the day of the race itself," Askwith says. "But they couldn't stop her. And she did it."

Eight of the military riders failed to finish the 1927 Grand Pardubice. Lata came in fifth out of the five finishers. Some newspaper accounts called the race a “circus.” But Lata proved that she belonged.

In 1933, Lata rode a golden mare named Norma in the Grand Pardubice. They came in fourth.  The next year, they came in third. The year after that, they were second. But the stakes were changing. Tensions between Germany and Czechoslovakia, already high, were building. Czechs feared a German invasion to take the Sudetenland, home of many ethnic Germans. Meanwhile, Nazi SS riders had won seven of the previous nine Grand Pardubice races.

"They were the first German units to actually carry out orders to massacre women and children," Askwith says. "I mean, this SS Cavalry was a very nasty organization. And the Nazis gloried in their sporting successes. And they saw that as proof that they were a better nation. And, ultimately, that they should take over Czechoslovakia."

"And they came to Pardubice to demonstrate their superiority over these people who they literally called 'the subhuman Slavs,' " Askwith says. "So the Czechoslovaks, conversely, if they could win their race, that was a way of proving that they were a proper nation and weren't to be crushed, and that their democracy was worth something as well.

"The official race day program talked about 'The Battle of Pardubice.' I mean, it was really — the whole thing was seen almost as a military confrontation." 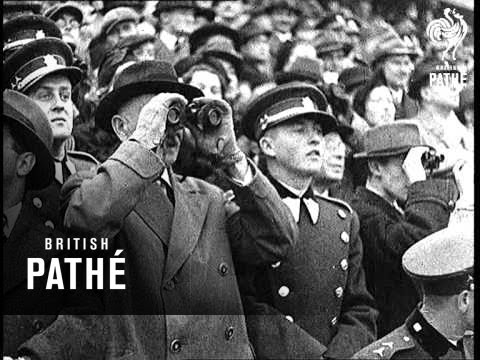 Seven Czech riders entered the race, including Lata Brandisová. By now, nobody was worried about her gender. What the Czechs needed was a national hero.

"The starter shouts 'Go!' The string is pulled away, and off they go," Askwith says.

Thirteen riders broke from the starting gate. All of them cleared the first three relatively straightforward obstacles. But then came the treacherous Taxis Ditch. Taxis requires a blind jump over a 5-foot hedge and over — hopefully not into — a 6-foot ditch. To date, more than 30 horses have died there.

"Oskar Lengnik, winner of the previous two years, falls really badly, breaks his collarbone," Askwith says. "Lengnik remounts because, you know, you had to remount to show you’re a real man, even though he must be in very, very severe pain."

Lata and Norma cleared Taxis, narrowly avoiding two other fallen riders. Lata’s strategy was to take her time, keep out of trouble and wait for an opening late in the race.

"She knows that Norma, her little mare, is a very good jumper, almost infallible jumper," Askwith says. "They all go over reasonably well for 10 or 11 jumps. And then they go off behind the stands, across a big area of plowed fields.

"This is actually a very testing bit," Askwith says, "because it could be very heavy mud."

The mud was sometimes so deep and heavy that even the best horses would get worn out in it, making the remaining jumps especially risky. But Lata had a plan.

"She went out slightly wider than the others, and where the going wasn't quite so heavy, and lost a bit of ground," Askwith says. "And they come up to this thing called the Snake Ditch, which is one of several very treacherous water jumps. Five horses fell there."

By now, Oskar Lengnik, the SS officer with the broken collarbone was back in the race, vying for the lead with Lata and German rider Willibald Schlagbaum.

"They go off to this bit where they go behind the woods," Askwith says.

There, the riders were temporarily out of sight of spectators and race officials.

"All sorts of dirty tricks went on. And, according to Lata, Schlagbaum was spending a lot of time trying to sort of cut her out and push her against a wall. But she just stayed calm," Askwith says.

When they emerged from the woods, spectators in the stands saw Schlagbaum in the lead, with Lata close behind. Lengnik, a distant third, still had a shot. With only one obstacle to go, it looked as if the race would once again go to Germany.

"But Norma and Lata had such a great relationship. And Norma loved Lata so much, and Lata loved Norma so much, they just worked so well together," Askwith says.

Lata had gone easy on Norma early in the race. But now she demanded a full sprint. As they approached the final jump...

"They’re neck and neck," Askwith says. "And Lata just finds a gap in time, jumps on the inside."

When Lata and Schlagbaum cleared that last obstacle, Norma had taken the lead. Schlagbaum’s horse began to tire, but Norma had plenty in reserve.

Thousands of joyous Czechs stormed the track. Lengnik offered words of congratulation to Lata at the finish line. He collapsed and was rushed to a Czech hospital.

Askwith says that, afterward, Lata told the press, " 'I just had this wonderful feeling that there was there was no one there who didn't like me.'

"And it would have been seen as a humiliation for these Superman, Teutonic Knight riders who are meant to be invincible warriors. And they've been defeated by a 'subhuman' Slav, and they've been defeated by a woman. I mean, you know, that was a real slap in the face. It was reported in the week following the race that anti-Czech rhetoric used in the Reichstag was the most violent used since 1918."

A World At War

Less than a year after Lata’s big win, the Nazis annexed Czechoslovakia’s Sudetenland. Early in 1939, Germany invaded the whole of Czechoslovakia. Soon, the world was at war.

"And that's the immediate reason why Lata Brandisová's story was totally forgotten," Askwith says. "And, when the Nazis occupied the whole of Czechoslovakia, they then took various aristocratic estates into administration. And one of the very first estates that they confiscated was Lata Brandisová's. She was not a popular figure with the Nazis, let’s put it that way."

In the years that followed, Lata risked her life to support the Czech resistance. She provided food for Resistance fighters and tended to the wounded during the liberation of Prague.

As for Lata’s beloved jumper...

"Norma avoided being conscripted. But no one in Czech racing knows ultimately what happened to her. There’s no record of her death," Askwith says.

Lata raced a bit after the war. In 1947, she rode in, but failed to finish, her final Grand Pardubice. After the Soviet invasion of 1948, Lata and her sisters moved to a little hut in the woods, where they lived in relative poverty for more than 30 years.

Lata Brandisová died in 1981. Her story almost died with her. She’s still the only woman ever to win the Grand Pardubice.

If you ever find yourself at the Pardubice racecourse, about 75 miles to the east of Prague, look for the stone on which the names of all Grand Pardubice winners are engraved. In the column for 1937, just to the right of the word “Norma,” it says "L. Brandisová." Many who read that don’t realize they’re looking at the name of a woman.

"Lata Brandisová just seems to have got a particularly raw deal," Askwith says.

"She is one of that tiny minority of sporting heroes who did what people said was impossible. And it seems ridiculous that one of the highest-achieving female athletes of the 20th century should be forgotten."

Richard Askwith’s new book is "Unbreakable: The Woman Who Defied The Nazis In The World’s Most Dangerous Horse Race."