This piece is part of our special 6/27/20 episode "Sports, Racism And The Myth Of Meritocracy." Check out the full show here.

So what can we do?

"Such a great question. I hope that ... we can see that this is an all hands on deck type of thing," says Penn State Professor and Burn It All Down podcast co-host Dr. Amira Rose Davis. "It's about how all of these different parts of what we call sports are interconnected and woven together to create the landscape that we know as sports. And so that means that we need to address racism and inequity from all of these different angles. So youth sports is a huge place to start and often gets left out of the conversation."

Youth sports is a $25 billion industry that funnels Black kids into basketball and football and track but leaves out those who can’t pay to play, Davis says.

"Taking money out of sports in any way that we can helps a lot of things," she says. "And then, as we move up through the collegiate into the professional levels, we have to get serious about hiring diverse coaching staffs and guidance counselors. And sports media really needs to get it together. We've been saying that for a while, but it's true. They really do. And so I think that it's one of those things where there's not one easy answer. There's not any easy answer, but there's certainly not one."

Over the past few weeks, I’ve heard a lot of ideas on how sports could be made more equitable and less racist. And all of them seem like they would help.

Should we consider penalizing universities that don’t graduate their Black athletes? Absolutely. That would help.

Can we change the rules of college recruiting to limit some of the advantages wealthy athletes have — including unlimited “unofficial” visits to schools? Absolutely. That would help.

Do we need to find ways to make youth sports cheaper and more accessible to all? Absolutely. That would help.

But there’s a problem with simply reforming the current sports system.

"We are long past Jackie Robinson ... And we’re still at a place where Black people don't even have significant power in the one thing that society has said they're good at."

"The long view of it is that institutions have always been designed and built in ways to advantage, you know, white elite men in particular," says Dr. Kirsten Hextrum, who studies race and sports at the University of Oklahoma. "Every reform in the existing system is going to have severe consequences to it. People with advantage are going to be more skilled at finding ways to get around that reform."

So, just like pretty much everyone else we spoke with, Hextrum encourages us to think bigger.

"Too often, we focus on these niche and specific policies," Hextrum says. "I want us to look at how we can reimagine sports as a whole. So similar to the conversations we’re having about policing. What would new sport forms that truly are equitable look like? And that might mean coming up with new types of sports in and of themselves.

"So, for instance, in the U.S. we have games that are based on dominance and competition. And I think we should reimagine that and think about what is it that we like and what are some of the benefits of sports we want to keep — you know, such as physical health, wellness, community — and really try to imagine sports that map along those lines."

So what if, instead of investing in basketball and soccer teams, communities provided access to Tai Chi and recreational swimming pools and biking trails?

What if colleges, instead of spending millions of dollars hiring the best football coaches, spent their money on sports the entire student body could play?

"They might no longer involve competing against other universities," Hextrum says. "They might just be about students playing games amongst themselves."

I know, I know. That idea seems crazy, and maybe even impossible. But there’s a bigger challenge that our experts mentioned — yes, even bigger than dismantling all of sports and imagining something better. And that challenge really doesn’t have anything at all to do with sports.

What we really need to do is dismantle the structural racism that underlies everything in our society, not just our games.

"We are long past Jackie Robinson," journalist Derrick Z. Jackson says. "We’re long past Hank Aaron, my hero. We’re long past Oscar Robertson and Kareem. And we’re still at a place where Black people don't even have significant power in the one thing that society has said they're good at."

Twenty three years ago, Tiger Woods won the Masters by a record 12 strokes. 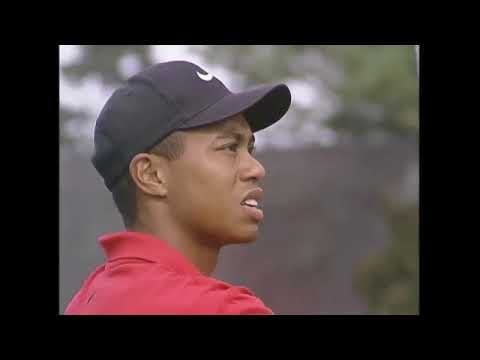 The moment was hailed as a tipping point. This was proof, they said, that racism in sports was a thing of the past. That anything was possible with hard work and talent.

And this is what Derrick Jackson wrote for the Boston Globe:

Tiger Woods is the latest comic strip in America's never ending search for Black Superman. After his victory in the Masters golf tournament, a New York Times headline said, "Woods tears down barriers." The Baltimore Sun called it "a day of broken barriers." And the Los Angeles Times said "barriers are buried."

Race relations will not improve as long as white people stand safely on the other side of the wall, cheering the precious few who can leap them with a single bound. The people of Metropolis have no right to claim Woods as their new superhero when they hand Black people so much kryptonite.

Jackson says he doesn't feel like much has changed since 1997.

And this idea that Black athletes can lift themselves out of poverty and transcend the effects of systemic racism?

"I am so sick of that narrative. You know, a player, a Black player comes through the line shooting, a free throw, and you can almost like telegraph it before it even starts," Jackson says. " 'What a wonderful kid. He comes up from a tough upbringing, and he's survived all that.' And, you know, why do we make our Black kids survive anything?"

"I think the point is to have a larger conversation, so that we're not only focused on that moment of upward mobility, but we're asking, 'Why was it required?' " Dr. Amira Rose Davis says. "Why are these the only opportunities for Black youth, both historically and now?"

"What we're seeing right now in the reaction of the killings of so many Black people, what we're seeing with the disparities of COVID and terms like 'systemic racism' finally gaining currency, thank goodness," Jackson says, "we can no longer uncritically celebrate the singular people like a Tiger Woods or Jackie Robinson or Hank Aaron."

Sure, sports has been an enormous force for good for many African Americans. Some, like Princeton's Russell Dinkins, credit college sports with changing their lives. And those who make the pros can attain generational wealth and a platform for speaking out on social issues.

"I would actually rather celebrate a nation where 13 or 14% of the NBA, 13 to 14% of the NFL is Black. And that 13 and 14% of physicists and scientists and mathematicians and lawyers and geeks in Silicon Valley are Black. That's the game I want to see Black people winning," Jackson says. "And, ultimately, at the end of the day, decades from now — it won't be tomorrow — an America that is open to all means that we’ll actually be playing sports less, and doing much more of the engine that keeps America going."

This story is part of our special episode on the myth of meritocracy.