On a Wednesday morning in June 1904, a side wheel passenger steamboat called the General Slocum left Manhattan.

"It had been chartered by St. Mark's Evangelical Church on the Lower East Side to take a group out for a picnic on Long Island," explains Haley Shapley, journalist and author of the recent book “Strong Like Her: A Celebration of Rule Breakers, History Makers and Unstoppable Athletes.”

"There was a band playing on the ship, welcoming passengers aboard," Shapley continues. "It was mostly women and children who were going on this voyage celebrating the beginning of summer. And it was a short journey, but the sailing was part of the fun and part of the excitement of getting out for the day."

But, early in the voyage, a fire broke out.

"It's never been exactly established why this fire broke out. But, once it did, it took over everything," Shapley says. "There were a lot of reasons for that. The captain chose to go into the winds, which fanned the flames. The paint aboard was flammable. The crew had never practiced a fire drill.

"With sure death from fire behind, the women ... waited until the flames were upon them, until they felt their flesh blister, before they took the alternative of the river.”

"And the fire just very quickly consumed the forward part of the ship. And it was under an hour that it was totally wrecked."

The life jackets on board were faulty, and the lifeboats were inaccessible.

The next day The New York Times reported:

"With sure death from fire behind, the women ... waited until the flames were upon them, until they felt their flesh blister, before they took the alternative of the river.”

The burning boat was still heading up the East River, not very far from land.

"It could have been a potentially swimmable distance," Shapley says. "If most of the people aboard knew how to swim and hadn’t been constrained by the clothing of the era, there would have been more of an opportunity for survivors."

But, back then, in the early 1900s, Shapley says swimming was considered a "masculine domain" in the U.S. — and few women had learned how to do it.

"And one of the main reasons for that was modesty and the outfits that were necessary for swimming," Shapley says. "So, in this time period, bathing costumes for women included about seven to 10 yards of fabric. And they were usually made of wool or flannel, which were fabrics chosen because they could keep swimmers warm. But they weren't chosen for their buoyancy.

"So, with wool tights, with knee-length bloomers, a sailor style blouse, a belt, a full skirt, and then shoes or swimming boots, that weighed a lot. So most women chose not to put on that huge amount of clothing and try to learn to swim, because it was dangerous. They worried that the skirts would wrap around their ankles and tangle them up, which was not an irrational fear."

So, many women and children aboard the General Slocum on that June 1904 morning didn’t make it to land.

"No one knows exactly how many people were aboard," Shapley says. "There was no official manifest for the ship. But there were thought to be around 1,350 passengers aboard with 321 survivors. So more than 1,000 people did perish on that day.

"Until 9/11 happened, it was the deadliest single-day disaster in New York."

News of the disaster spread around the county.

"The public was appropriately horrified," Shapley says. "People were really upset, and this reverberated across the country. There were new regulations that came out after that for better safety procedures, better training for crew, having more regular inspections that were actually testing the equipment.

"And also municipalities across the country really took note of this and started to offer swim lessons to their residents."

So there was a movement toward teaching more women to swim. But there was still that one big, heavy problem.

"People knew that there had to be a change in the swimwear if women were going to be able to swim," Shapley says, "but this disaster really sort of accelerated that process."

This is where a woman named Annette Kellermann enters the story.

Kellermann was born in Australia in 1886, nearly 18 years before the General Slocum disaster.

"She actually had rickets in her youth, which is a softening of the bones, and she wasn’t able to do much of any physical activity," Shapley says.

"And not just to rehabilitate, but to go on to become an Australian national champion in swimming," Shapley says.

Back then, swimming was much more accessible for women living in Australia than in the U.S. They weren’t expected to wear the same constricting bathing suits.

"Men and women wore the same swimsuit style, which was a one-piece that had shorts and a sleeveless top," Shapley explains. "So it was pretty similar to what you might see on a racing suit today for women."

As a teenager, Kellermann moved to the U.K. And in 1905, one year after the General Slocum disaster, the then-19-year-old attempted something no woman had ever completed: swimming across the English Channel.

"And although she didn’t make it, she gained a lot of attention for the attempt, because she spent a long time in the water and showed really strong swimming skill," Shapley says. "People were fascinated by her. She had a really magnetic personality, and she was invited to perform in front of the Royal Family.

"And she knew that in order to give this performance, she wouldn’t be able to wear her typical swimming costume."

(Like in the U.S., people in the U.K. weren’t accepting of the one-piece swimsuit that Annette Kellermann had grown up wearing in Australia.)

"And most people, most women at the time would have thrown a skirt over their swimsuit and called it a day," Shapley says. "But Annette didn't want to constrict her movement. So instead she sewed some black tights into the bottom of the suit.

"So, from her chin down to her toes she was covered in the swimsuit, but it was quite tight and it allowed her free movement in order to swim while also keeping her covered up. And, once people saw this, it became highly fashionable."

And the Royal family?

"They must’ve approved, because it really took off after that. People dubbed it 'The Kellermann,' " Shapley says. "And she traveled all around, came over to the United States, and did swimming demonstrations and shows and wore this famous swimsuit that she invented."

But Shapley says Kellermann’s swimsuit wasn’t immediately accepted by everyone in the U.S.

"Annette Kellermann herself claims that she was arrested on the beach for wearing her signature suit," she says. "And there's some debate about whether that actually happened. There don't seem to be records that show it. And it's a story she told a little bit later. But it was certainly true that women were cited and given tickets on beaches for wearing swimsuits that were the one that Annette Kellermann was promoting."

But, by the 1920s, Shapley says multiple manufacturers were making suits similar to The Kellermann. And more American women were swimming. In 1926, Gertrude Ederle — who was born in New York City less than a year after the General Slocum disaster — not only became the first woman to successfully swim across the English Channel, she did it faster than any man had done it.

Annette Kellermann never completed a swim across the English Channel, but she had plenty of other successes.

"She was one of the first sort of fitness celebrities," Shapley says. "She went on to continue to swim, to perform in vaudeville showcases, to take her swimming show on the road and to star in movies and to write books. 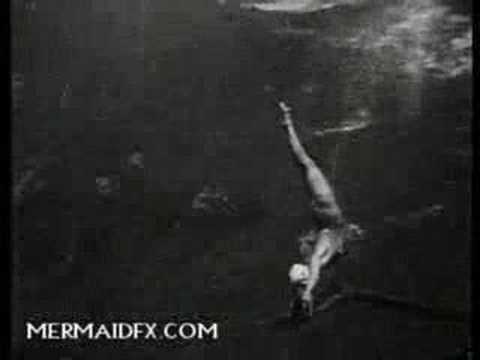 "And she would go and give lectures around the country. She would often disrobe and show this famous swimsuit of hers. And in one of her lectures, she said, 'You cannot be brave if your diaphragm is squeezed and you can’t breathe properly.' And I think that’s a really great point — that if you want to be brave, then you’ve got to feel comfortable."

"It's amazing how far that we've come for women and athletics, but there are still ideas about what's acceptable for women to do and not to do."

"It's amazing how far that we've come for women and athletics, but there are still ideas about what's acceptable for women to do and not to do," Shapley says. "And I found that myself. I signed up for a bodybuilding competition and I found that the reaction was really mixed from the people in my life.

"So even though I've had the opportunity to swim my entire life, there are still activities that some people don't think are appropriate for me."

Shapley says we can learn from Annette Kellerman to not be constrained by the prevalent standards of our time.

"She recognized that women were good at swimming, that they belonged in water, and she made a change that allowed to happen," Shapley says. "And I think there’s something that we can learn from that in the modern era as well."

For more on that bodybuilding competition and for more stories of “awe-inspiring” female athletes of past and present check out Haley Shapley’s recent book “Strong Like Her: A Celebration of Rule Breakers, History Makers and Unstoppable Athletes.”