Find our buildout from this hour, featuring a partial transcription, here.

Meet the 66-year-old boomer radical who is calling out prejudice against older Americans. We’ll talk with Ashton Applewhite, author of the new book "This Chair Rocks."

Ashton Applewhite, author of the book "This Chair Rocks: A Manifesto Against Ageism" and the blog Yo, Is This Ageist? (@thischairrocks) 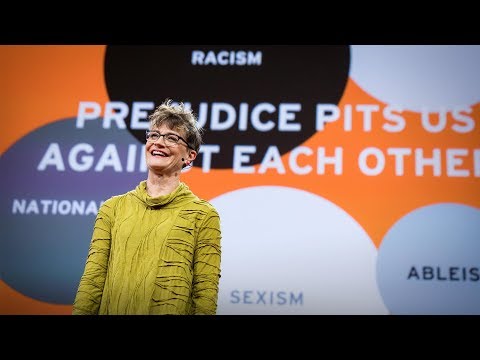 Excerpt from "This Chair Rocks" by Ashton Applewhite

Negative messages about aging cast a shadow across the entire life of every American, stunting our prospects, economy, and civic life. This is oppression: being controlled or treated unjustly. However, most Americans have yet to put their concerns about aging in a social or political context. When I ask people if they know what ageism is, most reflect for a moment, compare the word to other “isms,” and realize what it must mean. The concept rings true, and they nod. But it’s still a new idea to most. And unless social oppression is called out, we don’t see it as oppression. Perpetuating it doesn’t require conscious prejudice or deliberate discrimination. This lesser life is “just the way it is,” and the way it probably always will be.

It wasn’t always like this. In most prehistoric and agrarian societies, the few people who lived to old age were esteemed as teachers and custodians of culture. Religion gave older men power. History was a living thing passed down across generations. This oral tradition took a serious hit with the invention of the printing press, when books became alternative repositories of knowledge. As long as old age remained relatively rare, though, olders retained social standing as possessors of valuable skills and information. The young United States was a gerontocracy, which served the older men who held the reins; younger citizens had to age into positions of authority.

The nineteenth and twentieth centuries ushered in a reversal. Modernity brought massive transitions that reduced the visibility of older members of society, diminished their opportunities, and eroded their authority. Rapid social change made learning about the past seem less relevant. Aging turned from a natural process into a social problem to be “solved” by programs like Social Security and “retirement villages.” The historians Thomas R. Cole and David Hackett Fischer have documented how, at the start of the 19th century, the idea of aging as part of the human condition, with its inevitable limits, increasingly gave way to a conception of old age as a biomedical problem to which there might be a scientific solution. What was lost was a sense of the life span, with each stage having value and meaning.

Propelled by postwar leisure and prosperity, the explosion of consumer culture, and research into a stage of life newly dubbed “adolescence,” youth culture emerged as a distinct twentieth-century phenomenon. As this “cult of youth” grew, gerontophobia—fear of aging and dislike, even hatred, of old people—gained traction. Those of us who grew up in the 1960s and ‘70s were warned not to trust anyone over thirty, perhaps the first overt exhortation to take sides across a generational divide. The decades beyond thirty appeared ever less enviable. “Will you still need me, will you still feed me, when I’m sixty-four?” crooned the Beatles.

The status of older Americans is rooted not only in historic and economic circumstances but also in deeply human fears about the inherent vulnerabilities of old age: the loss of mobility, visibility, and autonomy. Not all of these transitions befall us all, and only two unwelcome ones are inevitable: we’ll lose people we’ve known all our lives, and some part of our bodies will fall apart. These changes are natural. We’ll all get older, and most of us will become less mobile. These transitions are natural and inevitable. But we live in a culture that has yet to develop the language and tools to help us deal with them. That’s partly because these changes make us feel vulnerable, partly because longer lives are such a new phenomenon, and partly because of ageism, both internalized and in the culture at large. As a result, all too often these transitions are characterized by shame and loss of self-esteem.

Internalized, these fears and anxieties pave the way for a host of unhealthy behaviors that include denial, overcompensation, and worse: actual contempt, which legitimizes stigma and discrimination. Two characteristics of marginalized populations are self-loathing and passivity—what my daughter tactfully dubbed the “yuck/pity factor” that the prospect of growing old invokes in so many.

As a friend who bought a house from a wheelchair user observed, “Damn, it’s nice to have wide doorways, and a toilet positioned this way—they should just do it for everyone.” That’s the premise of universal design—that products designed for older people and people with disabilities work great for everyone else too. “Age-friendly” products improve the built environment and make it more accessible, but stigma keeps them off the market. Realtors advise removing ramps and grip bars before putting a house on the market, as though no buyer could see accessibility as a bonus or aging into it as a necessity. Alas, thanks to internalized ageism, they’ve got a point.

Stigma trumps even the bottom line. There’s a fast-growing “silver market,” especially for products that promote “age-independence technology,” yet advertisers continue to pay a premium to target eighteen- to thirty-five-year year-olds. Despite the fact that people over 50 hold 70% of disposable income in the US, retailers are uneasy about stocking products for them and companies are leery of investing. Unless they’re selling health aids, brands don’t want to be associated with the no-longer-young set either. Just as telling is the resistance of older consumers themselves to buying products that might telegraph poor eyesight or balance.

Instead we blame ourselves for a vast range of circumstances not of our making and over which we have no control. Difficulties turn us into “problem people.” When labels are hard to read or handrails missing or containers hard to open, we fault ourselves for not being more limber or dexterous or better prepared. Watching an older person struggling to heave herself out of a low chair, we assume her leg muscles are weak or her balance is shot, instead of considering the inadequacies of seating so deep or low to the ground. If we see a teenager perched on a kindergartener’s chair, we don’t bemoan the fact that his legs got so huge. Kiddie chairs aren’t designed for teenagers any more than armchairs are designed for ninety-year-olds.

The issue is not competence, or incompetence, but it’s hard to keep sight of that in an ageist world. These obstacles are less of a problem than the underlying policies and prejudices that reduce access and independence. We blame our own aging, instead of the ageism that renders these natural transitions shameful and these barriers acceptable. Discrimination—not aging—is the barrier to full participation in the world around us.

From This Chair Rocks: A Manifesto Against Ageism by Ashton Applewhite. Copyright (c) 2019 by the author and reprinted by permission of Celadon Books, a division of Macmillan Publishing Group, LLC.

New York Times: "Opinion: In Defense of the Gerontocracy" — "Dianne Feinstein doesn’t get it. How could she? She’s 85. Ancient. She has had too many decades to resign herself to the status quo, and she won’t be around to watch the fires rage and the oceans boil. Step aside, Granny. Sturdier legs will lead the way.

"That was the subtext — actually, that was the text — of the California senator’s clash with schoolchildren in her San Francisco office last week, as they lamented her coolness to the Green New Deal and she pushed back that she knows a thing or two. She’s right. She does. And while that’s largely a function of smarts, it’s also a function of age. The building blocks of wisdom are experiences, which come only with the passage of time.

"Nancy Pelosi is 78. There was a lot of hand-wringing about that in the buildup to the midterms. I participated in it, joining many younger Democrats who questioned her determination to become House speaker. How about some fresh energy and new blood?

"Thank heaven she swatted us away, because she smacks down Donald Trump more effectively than any other politician, and the reasons include her poise and steel, the kind forged by many battles over many years. They accrue as wrinkles do, with prolonged exposure to the elements."

"This was clearly demonstrated in the recent hearings concerning Judge Brett Kavanaugh’s nomination to the supreme court, during which Chuck Grassley, the 85-year old chairman of the Senate’s judiciary committee, apologized to Kavanaugh for having to answer for his alleged crimes.

"The generation that once declared not to trust anyone over 30 now appears to trust few under 70, and this is true of both political parties.

"On the right, Donald Trump is 72, Senate majority leader Mitch McConnell is 76, and the ranking Republican senator, Orrin Hatch, is 84. And while the House speaker, Paul Ryan, is only 48, he is set to retire in November, leaving it open as to who will replace him."

New York Magazine: "Millennials Need to Start Voting Before the Gerontocracy Kills Us All" — "The United States, circa 2018, looks like a place run by people who know they’re going to die soon.

"As 'once in a lifetime' storms crash over our coasts five times a year — and the White House’s own climate research suggests that human civilization is on pace to perish before Barron Trump — our government is subsidizing carbon emissions like there’s no tomorrow. Meanwhile, America’s infrastructure is already “below standard,” and set to further deteriorate, absent hundreds of billions of dollars in new investment. Many of our public schools can’t afford to stock their classrooms with basic supplies, pay their teachers a living wage, or keep their doors open five days a week. Child-care costs are skyrocketing, the birth rate is plunging, and the baby-boomers, retiring. And, amid it all, our congressional representatives recently decided that the best thing they could possibly do with $1.5 trillion of borrowed money was to give large tax breaks to people like themselves.

"There are many plausible explanations for why America has embraced 'carpe diem' as its governing philosophy. Our ruling political party is dominated by geriatric billionaires and millenarian Christians; our electoral system gives politicians little incentive to prioritize the nation’s long-term well-being over their constituents’ immediate gratification; and the conservative movement’s decades-long assault on 'big government' has constrained the public sector’s capacity to invest in the future. But all these causes of American misrule are informed and exacerbated by this overriding fact: Young people vote much less than those who aren’t long for this Earth."