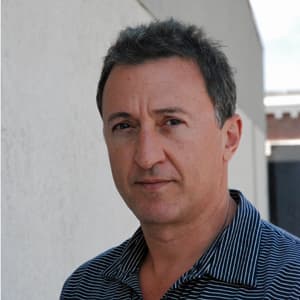 Stefano Kotsonis began his career in broadcasting in 1987 as a founding member of the nationally syndicated PBS current affairs program, “The Kwitny Report," which was awarded the George Polk Award for television investigative journalism.

In 1989, Stef moved to Athens, Greece, where he worked as a freelance reporter and producer for major television, radio and print outlets such as CNN, BBC, CBC, The European and USA Today.

After a year covering the Gulf War and the Kurdish refugee crisis for CNN, he was named Amman bureau chief and correspondent. From there, he covered most of the top stories of the 1990s, including the wars of [former] Yugoslavia, the Somali civil war and the humanitarian response, the Middle East peace process. His reporting sent him to the corners of the Caucasus, Middle East, Europe, and East and South Africa.

Click here for a link to Stef's CNN clip reel.

He returned to the United States in 1996, first reporting and producing for Reuters TV, later producing and writing for television documentaries for The History Channel, Discovery Health and PBS, such as “Islam: Empire of Faith," a three-hour documentary about the rise of the early Islamic empires which aired on PBS.

Stef made the switch to public radio in the summer of 2001, and has worked on several WBUR-produced programs, including Here & Now and now On Point.

Stef speaks many languages, most of them really badly: English, Greek, French, Turkish, Arabic. If phrases like “good morning,” “thank you” and “who stole my pen?” can be considered fluency, he can pretend to have some command of Serbo-Croatian, Somali, Swahili, Kurdish, Persian and Armenian.  As for his family life, there's one great vernacular expression in Greek to describe him: "Χαζο-μπαμπάς." Feel free to look it up.