Find our buildout from this hour, featuring a partial transcription, here.

Winning isn’t everything. It’s about how we handle failure. We unpack stories of defeat and redemption as told in Netflix’s "Losers." 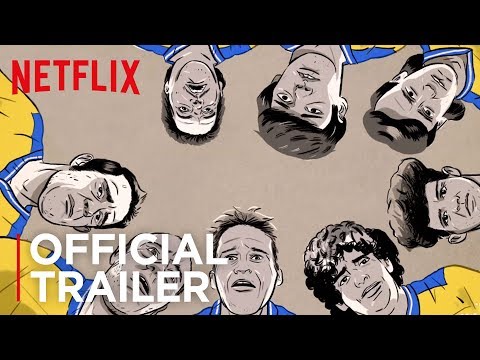 Michael Bentt, former heavyweight boxer, one of the most decorated amateur boxers in U.S. history. 11-2 record as a professional. WBO Heavyweight Champion in 1993. Boxing coach and actor. (@MichaelBentt)

The Guardian: "Winners are boring! The genius Netflix doc that celebrates losers" — "I have come to the conclusion that I vastly prefer sporting documentaries to actual sport. American football might be a tedious procession of stops and starts, but Last Chance U is a Shakespearian masterpiece. Similarly, Formula One the sport is just a lot of stupid noise, but Netflix’s upcoming Formula 1: Drive to Survive is as gripping as any thriller you’re ever likely to see.

"Now I have hit the mother lode. Netflix’s new documentary series Losers is ostensibly about sport: eight different sports, across eight different episodes. But the real subject, as you might have gleaned from the title, is defeat. Every episode tells the story of a notorious sporting failure, told by the people who were there at the time. And it is absolutely wonderful.

"Failure is much more common than success, but less often discussed. Indeed, with sport – which is built upon a teetering narrative of victory against all odds – there are many more failures than victors. One team might win the Premier League every year, after all, but 19 do not. Their stories are never heard, because the spotlight always swings around to the winners.

"And this is a terrible shame, because winners are boring. They have pushed so much aside in the dumb pursuit of glory that they barely even count as people. They are precision-built automatons. Losers, meanwhile, are interesting. They are more tactile, somehow; they have a much more interesting texture."

Hollywood Reporter: "'Losers': TV Review" — "I have to assume it's a glorious coincidence that Netflix is premiering the new sports documentary series Losers on March 1, which happens to be the 25th anniversary of the release of Beck's iconic Mellow Gold. The breakout single off that album was, of course, the genre-bending anthem 'Loser,' a song that mixes comedy and defiance and a killer hook in the name of reclaiming the 'loser' identification.

"Without exactly emulating or evoking Beck's stream-of-consciousness profound nonsense, Netflix's Losers has a similar goal. The eight-part series is executive produced and directed by Mickey Duzyj and focuses on eight so-called losers from across the world of global sports and recontextualizes both their failures and how their lives after failure defied their primary image.

"Duzyj, building on a background that blends documentary and animation, previously helmed the ESPN 30 for 30 short The Shining Star of Losers Everywhere, which celebrated the famously prolific and famously winless racehorse Haru Urara and was basically the template for this ongoing series. I'm sure there's an explanation for how ESPN and the 30 for 30 banner lost out on Losers, and ESPN and 30 for 30 are clearly the losers in this situation, because Losers plays as a fine and worthy model for a 30 for 30 miniseries. In total, the episodes run the gamut from silly to shocking to emotional to inspirational, and they're mostly very good."

IndieWire: "‘Losers’ Review: Netflix Series Shows the Fascinating Side of Sports Failure" — "Documentaries are often the ideal way to dig beneath the surface of widely-publicized events, which is what has made the genre of sports documentaries so appealing: One game, one moment, even one split-second decision can define an entire career — or an entire life. However, some of the best sports documentaries cut against the idea that a person needs to be measured against a single choice in the heat of athletic competition. 'Losers' is a perfect example.

"The new Netflix documentary series features in-depth conversations with individuals known primarily for their sports shortcomings. Over the course of eight episodes, the show focuses on a series of people whose failures stretched far beyond a single moment. Whether they were pilloried by a particular community or made global headlines for a series of mistakes, these people carry the label of the title of the show.

"But what makes director Mickey Duzyj’s series such a compelling watch is that, rather than turning these defining moments into Greek tragedies with drama-drenched retellings of scorn and mockery, there’s an overwhelming sense of empathy for how disproportionate some of these reactions can be. 'Losers' takes a familiar sports doc format — interviewing friends and family and reporters in addition to the people themselves — and adds a layer of vitality to these remembrances that transform each subject from object of ridicule to the heroes of their own stories."