Kermode bears, also known as spirit bears, are incredibly elusive. They live only in one section of British Columbia’s central coast, and a new study indicates the gene that turns their fur white is even rarer than previously thought. We talk to two researchers from the study about the quest to protect and preserve the Great Bear Rainforest.

On the unique beauty of the Great Bear Rainforest

Doug Neasloss: “I would say this place is quite a magical place. I mean, this is one of the only places left where you'll get old-growth and ancient-growth forests, large biodiversity in the wildlife there. Some of these trees can be quite a few meters wide, and up to two to three hundred meters tall. So you can get some really big trees up there.”

Christina Service: “It's remarkably rare. I mean, I think often when people say rainforest, you think of the Amazon in the tropics. But the temperate rainforests are just as magical. There's so much diversity, so many shades of green than you could even imagine with the lichens and, as Doug mentioned, these ginormous old cedars and spruces. The forest is something that almost everyone should witness at some point in their lives.”

"I think often when people say rainforest, you think of the Amazon in the tropics. But the temperate rainforests are just as magical."

On where the spirit bears’ name comes from

Doug Neasloss: “I think people have always had a healthy respect for just the rarity. They're just extremely rare animals, only found in this part of the world. And it's kind of neat when you're in this dark green forest, you know, and you see this bright white bear come walking out, you know, it just has this spiritual presence about it. And so that's how it was coined, the name spirit bear. It was also actually a big campaign as well to protect this part of the world in the early '90s, when it was under threat from forest companies. They wanted to develop, and that was a name that we used for the spirit bear to help protect this region.”

On what gives the spirit bears their white fur

Christina Service: “They're not albinos, they have pigment. In contrast, albinos would have, you know, sort of the typical pink eyes and things you would associate with that. They're actually, in many ways, closer to redheads in humans. So it's actually the same gene that controls the white coat in spirit bears as redheads and red hair in humans. And so they have the same pigment [as black bears]. But as Doug said, shockingly, in this forest, in this ecosystem, they're pure white from tip to tail.”

"In our culture, our elders have always said everything is connected."

On the challenges facing the Great Bear Rainforest

Doug Neasloss: “I would say forestry is certainly an ongoing issue and loss of habitat. I would say global warming is certainly another major issue. But as ocean temperatures are rising. Major decline in salmon numbers. Historically, some of our rivers used to have about 80,000 salmon. Some of those same systems now are down to about four or five thousand salmon. So we're continuing to monitor some of these issues and trying to do what we can in terms of protection.

"… In our culture, our elders have always said everything is connected. If you take one thing out, it affects everything else. And so, for instance, if you lose salmon that’s going to affect the forest, that's going to affect the bears. So, yeah, I mean, I think it's really important that we look at things from a bit of a holistic perspective and look at protecting quite large regions and protect all the biodiversity in these areas.”

On the spirit bears’ role in conserving the rainforest

Doug Neasloss: “I believe the spirit bear is basically the face of the Great Bear Rainforest. I know back in the ‘90s, this area was all slated to be cut. It was all on the chopping block. And the government had given all of these permits to all the forest companies and they were going to knock it all down, and it was because of First Nations communities and environmental groups that really came together and coined the term Great Bear Rainforest, and there was a big surge to protect a lot of this region. And certainly, the spirit bear was a catalyst, because this is the only part of the world that you will find a spirit bear.”

"The spirit bear is basically the face of the Great Bear Rainforest."

On the pandemic’s impact on their conservation work and research

Doug Neasloss: “Our community has gone into complete lockdown. Nobody coming in, nobody going out. And that's been affecting a lot of our work, and then some of our projects. And luckily, we actually do have more local people. … So we were out there for quite a few weeks continuing on with the study, which has been great. And I should say it's had some positive effects. I mean, the fact that there’s no tourism this year was a window to see if bears will behave a bit differently and allow us to get out there and develop management plans accordingly. So, kind of an opportunity in some ways.”

Trailer for the film "Great Bear Rainforest: Land of the Spirit Bear" from MacGillivray Freeman Films 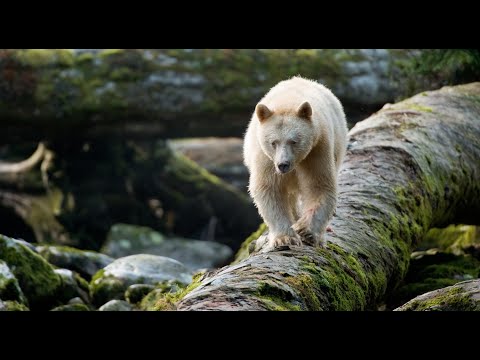 Smithsonian: "This Rare, White Bear May Be the Key to Saving a Canadian Rainforest" — "Very quietly we paddle to shore in a raft from the research vessel, which has stopped at the mouth of a small river cascading into the Pacific, one of more than a hundred salmon-bearing rivers in the 1,500-square-mile territory of the Kitasoo/Xai’xais people."

National Geographic: "First Nations Fight to Protect the Rare Spirit Bear from Hunters" — "There are stories about the white bears that hide in the deep forest of British Columbia’s coast."

The New York Times: "Hair From Ghostly Bears Reveals New Genetic Secrets" — "Douglas Neasloss was skeptical that Spirit bears existed. A member of the Kitasoo/Xai’xais First Nation in Canada, he had heard the stories of white-furred bears that roamed British Columbia’s rainforest."

This article was originally published on July 22, 2020.