As I watched the Jan. 6 insurrection unfold and learned that members of Congress were being hurriedly evacuated to a safer location, I remember thinking, “I hope Nancy Pelosi is wearing sensible shoes.”
But of course, she wasn’t, and wouldn’t — not on the day that Congress would finally confirm that in two weeks, Donald Trump would no longer be president. If ever there were a day to wear stilettos — shoes that asserted the wearer’s strength, balance and determination to project these qualities — this was it.

“Elevated shoes have traditionally signified nobility, power and wealth,” explains Vogue magazine. And they served a practical purpose as well. Sixteenth-century Venetian women wore them to keep their skirts out of the mud, “… soldiers fighting on horseback in 17th-century western Asia wore heels to keep their feet in stirrups; and in the 18th century, France's King Louis XIV wore red heels as a symbol of his authority.”
Elevating herself above the mud, staying in the saddle and exercising authority — that’s the story of Pelosi’s career in Congress, spanning 35 years as a representative from San Francisco and two terms as speaker, a role from which she has just announced her retirement. 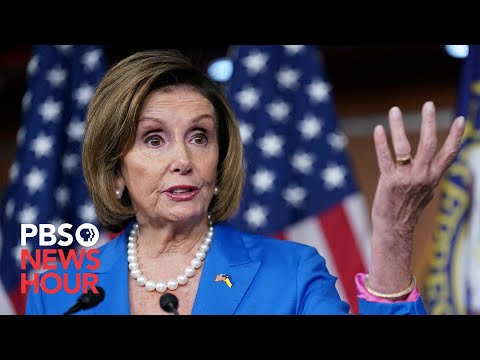 Unlike Alexandria Ocasio-Cortez — the dynamic symbol of a new and hopefully ascendant generation in office — Pelosi was not the scrappy, self-made outsider speaking truth to power. No, she was born into a political family, and as the daughter of Baltimore mayor and U.S. Rep. Thomas D’Alesandro, she learned how to acquire and wield political influence from an early age. After marrying Paul Pelosi, a wealthy venture capitalist, and moving to San Francisco, she was able to raise five children without financial worries or constraints, and with the luxury of free time that she could spend volunteering in various capacities for the Democratic Party.

But unlike so many people to the manor borne, Pelosi’s privileged life before and after becoming a member of Congress in 1987 didn’t sap her of empathy or fire. Despite her deep Catholic faith, she consistently championed abortion and LGBTQ rights. In 2018, in what was then the longest speech in House history, she spent eight hours recounting the life stories of DREAMers as she opposed a budget deal that failed to address the future of DACA recipients at risk of deportation.

Her efforts on behalf of working people were unflagging. As speaker, she spearheaded the successful effort to pass the Fair Minimum Wage Act of 2007 and opposed the Trump tax cuts of 2017, saying (albeit with a bit of mangled Yiddish), “In terms of the bonus that corporate America received versus the crumbs that they are giving to workers to kind of put the schmooze on is so pathetic.” As House minority leader during the George W. Bush administration, Pelosi employed ferocious tenacity to achieve near-unanimous opposition to Bush’s proposal to gut Social Security by allowing workers to invest a portion of their deductions into stocks and bonds, leading to the bill’s defeat.

Of course, she is not universally beloved. The right hates and fears her smarts and skill. The progressives resent her early dismissal of “the lefties” and her choices of what battles not to fight, such as her opposition to single-payer health care. And many representatives at all points on the political spectrum feel restless and resentful of a leader who has been known to say, “No one gives you power. You have to take it from them.”

Indeed, the struggle to craft and pass “Obamacare” illustrates what has made her so exasperating to both the right and the left, and also so effective in a system seemingly devoted to gridlock. As the New York Times explains, “Pelosi — who in her first floor speech in 1987 vowed to fight AIDS and who in 2002 was the most high-profile Democrat to vote against invading Iraq — fell back on the credibility she had with progressives to persuade them that the 'public option' hybrid of single-payer and privately managed health care plans was now dead on arrival in the Senate. Then she persuaded Rep. Bart Stupak of Michigan, an anti-abortion Democrat, to drop his demand that the health care bill prohibit federal funds being used on abortion.” When he was finally able to sign the Affordable Care Act, Barack Obama characterized Pelosi as “one of the best speakers the House of Representatives has ever had.”

She achieved that status not despite being a woman, but because she’s a woman.

Like any parent of five, in this and so many legislative efforts, she had to herd, mobilize, cajole and discipline her brood. To say that she brought her skills as a mother to her job as speaker is not to infantilize the representatives, but to recognize the stamina, understanding and individualized attention that any good mother employs. Pelosi’s mastery lies in accommodating the unique needs that each Democrat faces in his or her district. As Dan Rather and Elliot Kirschner wrote, “Contrary to the claims of her critics, she also understood America well, especially the needs of the members of her caucus who hailed from a diversity of districts. She was able to balance the opportunity of the moment with the needs of the future.”

This kind of pragmatic idealism can look like self-serving complacency. It’s something that I couldn’t appreciate until recently, and even now find myself occasionally rejecting. But I am both old enough to value Pelosi’s enormous accomplishments, and restless enough to appreciate the next generation of progressive leaders in their determination to arouse the Democratic base beyond the prolific fundraising at which Pelosi is so adept.

But I won’t forget how far she’s come, and taken us with her. Like her stilettos (named after a knife with a slender blade and needle-sharp point), Pelosi is a product of the 20th century. As British Vogue explains, “… the heel was engineered in the 1950s when new materials and techniques invented for aircraft carriers were applied to shoe construction. The use of aluminium and injection moulding to fuse metal and plastic made it possible to elongate and raise heels to new heights.”

The shoes’ inventors cracked the code to make stilettos wearable: “The key was in finding a way to support the arch of the foot … allowing the shoe to move with the body rather than against it.”

And as we saw on Jan. 6, the 82-year-old woman wearing them knew how to move the public body, to work with American democracy, not against it.