Endless Thread presents a special series, "Infectious: The Strange Past and Surprising Present of Vaccines — and Anti-Vaxxers." This is Part Three. Find Part One here and Part Two here.

Eli and Jen are the parents of an almost-2-year-old. They're in their 30s, they live in Missouri, and they've been married 11 years.

A prime example of this came up when Eli and Jen first got pregnant. Eli was pro-vaccination. Jen?

"It still is a subject that makes me nervous because it’s not clear black and white," she told us.

Eli posted about their disagreement over vaccines on Reddit.

Jen was pretty nervous about making this crucial decision, and her skepticism was reinforced by what she found online.

"To be honest, it was because of all of the cliche things you see on social media, just posted to make you worried, that say vaccinations are horrible."

Jen shared what she found with Eli, and he admits, some of it stayed with him. But not because of what it said.

"I think what a lot of people don't realize is the power of some of the imagery that's just thrown out there. If someone has pictures of a baby that might have passed away, and it's anywhere within the time frame of a vaccination, the facts of the case don't stick with you. The image, the picture — that's what sticks with you."

"The facts of the case don't stick with you. The image, the picture -- that's what sticks with you."

Along with imagery, Jen was finding conspiracy theories.

"I have a friend who used to be a nurse in a pediatric intensive care unit. He shared a video on a whistle-blower from the CDC that said that there was a link to vaccinations and autism, and someone had destroyed that evidence."

So Jen was conflicted. Probably even more so because of what she does for a living.

"I’m actually a nurse in an emergency department, a Level 1 trauma center. And I guess the whole time I was pregnant, when the conversation came up with co-workers about vaccinations, I would say I'm not sure if I'm going to do it."

On the one hand, Jen she should have all the information she could ever need on making this choice, given her occupation. On the other, she’s getting enough information and imagery online that she’s thinking she doesn’t want to vaccinate her first-born child.

And Jen is not alone. Vaccine skepticism and misinformation is all over the Internet, and it's spreading. It's on YouTube, Instagram, Twitter, websites and forums that people visit for parenting answers or other medical information. Yes, some of it’s on Reddit, too. But as we’ve worked on this series, we’ve heard a lot about one platform in particular: Facebook.

It's not surprising that vaccine misinformation would have a home on Facebook. You have to meet people where they are, and people are... on Facebook. The trouble is, that bad information is often easier to find online than the good information.

Why is it like this? We asked Joan Donovan, Director of the Technology and Social Change Research Project at Harvard Kennedy's Shorenstein Center. Her research focuses on disinformation and media manipulation online.

"It's never been as powerful and as potent as it is these days," Joan says. "Targeted advertising online has given everyday people the capacity to find people with similar interests and people with specific vulnerabilities."

And Joan says you can use technology to feed bad information directly to vulnerable people.

"One of the techniques, if you're not using any pay-for advertising, is to just search out 'momversation' groups," Joan says. "These are groups where young parents will get together to share tips and tricks and [...] it's in these spaces that we see that they're presented with a range of alternatives — from products, to outright refusal and how to refuse."

You don’t have to look far for an example of this experience. They're all across the Internet, and even on the ABC television show Black-ish. 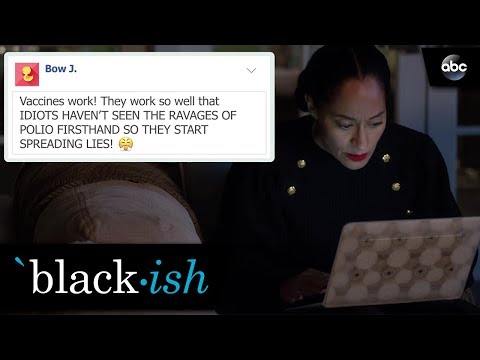 On Black-ish, it’s funny. In real life? Not so much.

We asked Joan if it's fair to say that the anti-vaccine movement is "radicalizing" new parents online. "Well, when we think about radicalization, we tend to think of something probably much more pointedly political that has, and in this case does have, life and death consequences," Joan says. "It's troublesome that a word like that might fit here."

Part of what's at play here, too, is that parenting is an emotional act. Joan explains:

Does it stand scientifically that vaccines cause autism? No. But does that fear cause people to act in different ways? Yes. Now when you're making your decisions about what your child is going to eat or drink or ingest or breathe, those are really weighty decisions and parents do need to do a fair amount of research. But that's why we have doctors. This is where the problem is — we have a belief in the Internet as a countervailing network of knowledge, and it's just not true. There is good knowledge on the Internet. It is very hard to find.

Joan says this is because most scientific research is behind paywalls. But Facebook, or really any social media? Free, baby.

"And we know that there are, pardon the use of the term 'fake news,' but literally fake scientific news websites that look very organized," says Joan. "The articles are very well written, but they are not presenting scientific information."

"The articles are very well written, but they are not presenting scientific information."

Why do the vaccine resistant and vaccine hesitant communities seem to have such a strong presence on social media? And why don't the pro-vaccine folks have seemingly as strong of a presence?

"It's really hard to create a movement for common sense," says Joan.

Of course, anti-vaccine voices would argue they are the common sense movement. And that movement appears to be flourishing. In the last three years, some of the most popular health-related content on Facebook was about vaccines. And close to a quarter of those posts were generated by just 7 pages that are known for spreading anti-vaccine messaging.

"I do get some donations and I also promote affiliate types of products," Larry says. "I used to get money from YouTube but then they demonetized me."

Larry also makes money from his online course, "The Social Media Activist Training for Influencers," which teaches everything from Photoshop basics, to how to fully employ the organizing tools that Facebook already offers.

So how does Facebook feel about all of this? We spoke to their head of global policy management, Monika Bickert: "Well first I want to clarify that what we're doing on Facebook is not about the anti-vax movement. What we're trying to do is stop the spread of misinformation [and] hoaxes that are about vaccines. Specifically, what we're trying to do is make sure that we are not surfacing those hoaxes, or groups or pages that share those hoaxes, in search results on Facebook."

"So if somebody sees one of these hoaxes on Facebook, they also are seeing information that can lead them to credible sources where they could learn more about vaccines."

But an important distinction here is that Facebook's new policy does not affect people sharing their personal experiences with, or their opinions about, vaccines.

"It’d be great if Facebook didn't capitulate to mainstream media pressure and congressional pressure. But we don’t really have much choice in the matter so it is what it is."

This Facebook policy, of not banning this type of content but making it harder to encounter, is one that is also used by Reddit and other tech companies that don’t want to get into deciding what is, and is not, OK to say. We’re in Free Speech ‘Murica, after all. But what if Free Speech ‘Murica is actually creating a public health crisis in ‘Murica? What if Facebook really is a potent driver of vaccine misinformation?

We asked Monika if Facebook shares some of the blame for the measles outbreaks that have occurred as a result of growing anti-vaccine sentiment.

"We're certainly a place where people talk about vaccines and we know that people have shared these hoaxes or misinformation on Facebook. [...] We're continuing to work on this and we're committed to getting it right."

She added, "What happens on Facebook mirrors what happens in the off-line world. So just like people talk about this off-line, they're going to talk about it online."

Monika’s right. The Internet is a reflection of the offline world. But the offline world reflects the internet, too. The internet has galvanized all kinds of groups, including anti-vaccine groups. Those groups reach further, wider, and faster than they used to. They’re getting stronger in real life, and their figureheads are getting bolder.

This includes Del Bigtree, the man who made a documentary about an alleged cover-up at the CDC, and now hosts the Internet talk-show "The Highwire." Take this for a spin...

If you were a little shocked to hear this comparison, it’s time to talk about Nazis. Del was wearing the yellow patch Star of David on his sleeve to stand with the Orthodox Jewish community in Rockland County, New York, where the religious group’s own resistance to vaccines has helped lead to a bad measles outbreak. But the imagery here is hearkening back to persecution of Jewish communities that was most infamously executed by the Nazis during World War II.

The suggestion is that forcing people to vaccinate, or shaming them for not vaccinating, is tantamount to fascism. This is a common refrain among people who are anti-vaccine, vaccine resistant, or vaccine hesitant.

The more polarized this debate gets, the worse off everyone is. On the one hand you have vaccination skeptics spreading information online that has convinced some people to not vaccinate, which is leading to measles outbreaks across the country. On the other, you have people on the pro-vaccine side calling for fines and restrictions to be placed on people who choose not to vaccinate. So both sides are raising the stakes. And when the stakes get raised, the debate gets uglier.

So let’s go back to Jen and Eli, the Missouri couple who disagreed about whether or not to vaccinate their son. They did end up vaccinating him, and while they plan to do the same when their second child arrives in August, Jen is still uneasy.

"I wouldn't sit here and say that I'm pro-vaccination. I would not be the person to convince anyone," she says.

In part 4 of Infectious, we go to a place that has felt the impact of the anti-vaccine movement first-hand: Clark County, Washington. It comes out on May 24.

The decision to vaccinate is a big topic, and a personal one. We want to hear from you. Call 857-244-0338 to leave us a voicemail with any vaccine-related questions or experiences that you'd like to share. Tell us your name and where you're calling from, and we may include your story in a future episode.