Monday mornings are one of the busiest times of the week in the emergency room at the Mayo Clinic in Rochester, Minnesota.

On one Monday in May, a middle-aged man tells Dr. Daniel Grossman he's been feeling weak and having heart palpitations.

"They keep telling me my heart's fine but yet I have no energy, I want to pass out all the time," the man says, "you know, things are just telling me there's something wrong with my heart."

After a few more questions, the doctor recommends some blood work, and pulls open the curtain to head back to the ER.

Grossman, 37, lost the use of his legs less than a year ago, and he's already back at work.

Grossman's memories of the accident that left him paraplegic are fuzzy. He was mountain biking with his friend Ron last September in the Cuyuna trail system of northern Minnesota.

It was the end of the day, and they decided to take one more run.

"Ron was in front of me and I was following behind him, and the next thing I know I woke up with people around me," Grossman says. "I had a weird feeling around my stomach, like a numbness in my mid-abdomen, and I knew that I couldn't feel my legs. So you had this feeling of being disconnected from the world and from your body. And everybody around me was freaking out."

He was airlifted to North Memorial Medical Center in Minneapolis, where he learned he had suffered a spinal cord injury between his seventh and eighth thoracic vertebrae. Daniel survived the crash because he was wearing a helmet, but the injury left him paralyzed below his mid-abdomen, a few inches above his bellybutton.

Grossman spent the next 4 1/2 months in three hospitals, recovering from the accident and learning how to do basic things, like how to get in and out of his wheelchair without falling.

Transferring, as Grossman calls it, is something he had to practice for months — from his bed into his wheelchair, from his wheelchair to the ground and back, to and from the toilet. Falls are especially dangerous for people with spinal cord injuries, because it's hard for them to tell if they've been injured in the paralyzed parts of their body.

"When I say, 'I know your life is about to change or is changing today,' they look at me and they know that I know what I'm talking about, and it's pretty emotional."

Dr. Daniel Grossman, on how his injury has changed his interactions with patients

Today, Grossman lives on his own. He's more comfortable in his wheelchair, though he still worries about falling out of it.

He's had to renovate his apartment so he can do things many people take for granted, like lowering the sink so he can clean dishes on his own. Grossman also relies heavily on technology, using Amazon's Alexa to operate the lights and Instacart to have groceries delivered to his apartment.

"The only answer to overcoming the fear and the skill is to keep doing things until you're comfortable doing them," he says.

Other difficulties aren't talked about as much, like how to use the bathroom when you can't feel the lower half of your body. Grossman says he times his bathroom breaks based on what he's had to eat and drink, and carries an extra pair of pants just in case.

People with spinal cord injuries are also two to three times more likely than the general population to show signs of severe depression, according to the Christopher and Dana Reeve Foundation, and are at a higher risk of attempting suicide.

Grossman acknowledges he's needed to pay close attention to his mental health since the accident. But he says early on during his recovery, he faced a choice.

While Grossman says he’s doing everything he wants to do, he feels "an increasing sense of loss" about his life before the accident. There are constant reminders of his disability, he says, "like in synagogue when the rabbi instructs the congregation to 'all rise' … or a concert or musical where the audience gives a standing ovation.

"You can't participate in these little parts of culture," Grossman says. "[It's] a reminder that you'll always stand out just a little bit, even if you don't want to."

Despite the challenges he has overcome, Grossman says he doesn't like the idea of being called an "inspiration" by people who hear his story.

People with disabilities often rely more on friends and family. Grossman's parents were traveling in Europe and came to Minnesota for six months after his accident to help him recover, which took an emotional toll on the whole family.

In February, just five months after his accident, Grossman resumed his job as medical director of the health insurance startup Bright Health in Minneapolis, and four times a month he drives himself an hour and a half from Minneapolis to Rochester, Minnesota, for shifts at the Mayo Clinic. 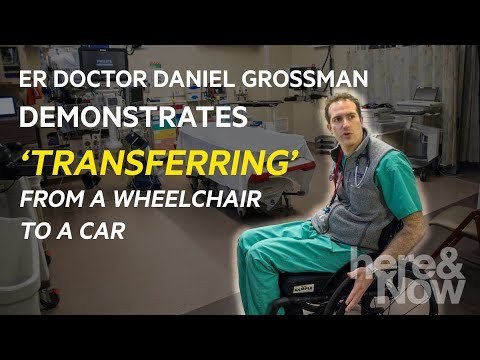 In the basement garage of his Minneapolis apartment building, Grossman demonstrates the process of transferring from his wheelchair into the driver's seat on his way to work.

"So I pull up to the car, lock my breaks and then hop in. Typically my legs spasm a little bit as we go here," he says.

It takes about five minutes for Grossman to get behind the wheel and take apart his wheelchair, which he throws into the back seat.

"These YouTube guys make it look like the simplest thing in the world," he says. "What I've learned through all this is life is one big experiment and you just have to figure out what works for you."

Once he's on the road, Grossman uses a system of hand controls to drive.

"There's a knob on the wheel that I'm using with my left hand and I'm using the hand controls with my right hand," he says. "And now we're just driving like normal."

From Patient To Doctor

It wasn't that long ago that Grossman was one receiving treatment, and getting back to work as an emergency physician initially seemed like a big hurdle, he says.

"When it was time to get back practicing and trying things, we did what's called simulation," he says. "We'd take mannequins and we could practice intubating them or doing central lines or doing lumbar punctures, a spinal tap. We also set up patient rooms in the ER at Mayo and had mock patients — usually like a friend's kids — so I could learn how to navigate the room."

In some ways, Grossman says, the physical challenges of getting back to work were easier to overcome than the psychological aspects of his job. Some patients are rude to him, he says, or have difficulty believing their doctor is in a wheelchair.

But most don't mind — and many patients find it easier to relate.

"It's also very clearly broken down barriers with patients, because they know that you have gone through something, and so they're much more willing to listen to you when you offer advice," he says. "When I say, 'I know your life is about to change or is changing today,' they look at me and they know that I know what I'm talking about, and it's pretty emotional."

Grossman says it's scary caring for patients with spinal cord injuries like his.

"Maybe they broke a foot because they hit it against a wall, or they have a systemic infection from a skin sore that’s become infected," he said. "All things that could and may happen to me at some point."

There are approximately 300,000 Americans living with spinal cord injuries, and Grossman isn't the only one of them who is also a doctor. Another is a colleague at the Mayo Clinic, Dr. Robert Brown, a neurologist who was paralyzed more than 40 years ago when he was just 14 years old.

During Grossman's recovery, Brown became somewhat of a mentor, offering practical advice like how to keep slip-on shoes from falling off his feet, and coaching Grossman through the transition to his new life.

"That was one of the things Daniel and I talked about when I first got to meet him. We talked about his transition to the new normal, if you will, in Daniel's life," Brown says, sitting with Grossman in a doctor's office at the clinic.

"The more you're able to appreciate what you're able to do, despite the fact that you're using a wheelchair to get around, as opposed to the things that you can't do or an obstacle in your place, you're going to be much better off and readily be able to work through whatever obstacles might be in front of you."

After seeing patients in the ER, Grossman heads to the third floor of the Mayo Clinic's Saint Marys Hospital Mary Brigh Building, where he spent months in physical rehabilitation.

"I hated being here from the sense of, 'I'm in the hospital,' but it was really good for me," Grossman says, sitting outside the room where he spent 64 days learning how to navigate the world from a wheelchair. "The nursing care is fantastic, the physicians are great and I, at the end of the day, have really positive memories of learning how to get back on my feet, so to speak."

A man in the hallway recognizes Grossman, and shouts hello.

"Can't rest," Grossman replies, "got things to do."