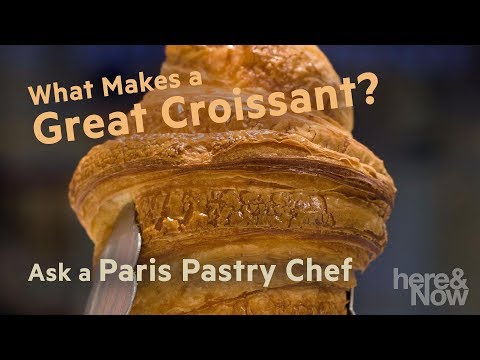 Laurent Duchêne has been recognized as one of the best pastry chefs in France.

He owns a bakery in Paris' 13th arrondissements municipaux, or administrative district, and if you're looking for a perfect croissant, he might just be the guy to visit.

"A perfect croissant, it's a very crispy croissant with a lot of puff pastry, and it smells a good taste of butter inside," Duchêne says. "A bad croissant is very soft, like a brioche, and you can't have a very good smell of butter, it's not creamy inside.

"It takes a lot of time and process to make a good croissant."

Duchêne says butter is key — and one reason France has such a good croissant game.

"For us, we're using [Appellation d'Origine Contrôlée] butter, which is produced in France in the best area for ... butter," he says. "Butter is very important for the croissant ... and it gives the taste of the smoothness of the croissant."

Once you've got the perfect butter, next comes the dough.

"The dough should be made one day in advance, because she should maturate overnight in a fridge to get all the flavor from all the yeast, and that's very important first," Duchêne says. "And then afterwards, we should add the butter. So it's very important to have the thin layer on very even to get something crispy, to get a very good puff pastry.

"After you make the dough one day in advance, it could take about 1 or 2 hours to finish the croissant, because the croissant needs to prove, needs to be baked. Because it contains yeast, and it should rise at the temperature of 25 degrees [Celsius] — not more, otherwise the butter will melt. It should rise into [a] humid atmosphere, to make sure it doesn't dry, also."

Duchêne bakes his croissants for about 40 minutes at 180 degrees Celsius, he says.

Duchêne wears a red, white and blue collar that pops off the white of his chef's coat. It signifies his status as l'Un des Meilleurs Ouvriers de France — a winner of a prestigious competition among the country's best culinary craftsmen, held every three to four years.

"It's the highest competition for hand-working in pastry," he says.

In Duchêne's bakery, there are baguettes, eclairs, tarts, bon bons, almond croissants and, of course, plain croissants. He says about 800 items per day walk out the door in the hands of pleased pastry-seekers — but croissants are the best-seller.

"The best selling of croissant, it's early in the morning. So as soon as we open the shop, people wait to get the croissant," he says.

In the early evening, there were still plenty of items in the case. But Duchêne won't be selling these croissants the next day.

"No, we never sell croissants for tomorrow from the day before," he says. "We cook them every day. ... Overnight, the croissant gets moist with humidity, and it's not crispy. It hasn't got the same taste of butter, fresh butter."

Duchêne says he remembers one American visitor who was smitten with his croissants.

"He came every day, he spent a week in France, he comes every morning, and it feels like he was in a toy shop, you know? 'I like this, I want this, I want to try this,' " Duchêne recalls. "It's funny because ... with his big eyes, looking [at] everything, wanting to try everything. I really like this."

As for Duchêne, when he's the one eating, he likes to keep things simple.

"I like the plain one, yes," he says. "I just like croissant with coffee — that's all. I try [to have a croissant] two or three times per week, but not more than this, because I try to keep healthy."