New York's biggest civic complaint is noise. And though the city's sounds are part of what makes life there unique, too much of it can be dangerous — affecting hearing, stress levels and more.

Now, a team of researchers at New York University, in collaboration with Ohio State University, are undertaking an initiative to learn how much noise there is, and what is causing it.

The project, called Sounds Of New York City (SONYC), involves placing sensors around the city to record 10-second sound clips. The audio is uploaded onto a website where citizen scientists can help identify them. SONYC also relies on artificial intelligence, as computers get better and better at identifying the sounds on their own. The goal is to help the city's Department of Environmental Protection mitigate against noise pollution.

Even though the sensors are 20 feet above the ground, "that gets us close enough" to monitor relevant noise, says NYU postdoctoral researcher Graham Dove.

"That's us up there," Dove says, indicating what looks like a black dot on top of a utility pole in Brooklyn. "If you come around to this side you can see where the microphone cover is, where the windshield is for the sensor and the little WiFi antenna."

The sensors capture a variety of sounds in just a few minutes: buses, sirens, street musicians. They're made in a lab at NYU's Center for Urban Progress, a spacious, glass-enclosed workshop where the sensors are made.

"We have a number of microphones, single-core computing board," Dove says, and then points to a toy fire truck, which he activates with a small button. "When we're demoing the abilities of the sensor, particularly the machine learning aspects of the sensor, our little fire truck comes in very useful."

And while playing with the fire trucks seems like a lighthearted endeavor, research scientist Mark Cartwright explains that at its core, the project is a serious one.

"The goal is to monitor, analyze and mitigate urban noise pollution," he says.

Ultimately, it will provide city agencies with information they can use to protect New Yorkers from excessive sound. And the dangers posed by noise can be significant.

"Some people have said noise is a silent killer, which is a weird way of saying it," Dove says. "Because it's the long-term damage of being exposed to loud noises kills the upper registers in your hearing. And so over time, it becomes harder to not only hear in terms of volume, but also make out in terms of clarity what people are saying conversation."

"It's the cumulative build-up of noise over time," he explains. "It's that at some point in time you can't get away from it."

The researchers explain that the 10-second recordings gleaned from the sensors are placed on a web platform called Zooniverse. Participating scientists log in, listen and label what they're hearing with pre-set tags, which are related to the New York City noise code — sounds deemed actionable by the city's Department of Environmental Protection.

Still, there's only so much the citizens can do. So far, there are about 130 million recordings, with only about 10,000 annotated. But those 10,000 help the SONYC computers learn to identify others.

Cartwright says he's hoping to have about 160,000 eventually annotated.

SONYC is actively looking for citizen scientists, particularly experts like construction workers who might know the difference between the sound of a backhoe and a pile driver. Less-skilled ears are needed for everyday sounds like "engine sounds and alert sounds, like sirens and honking and car alarms, and human sound in terms of shouting, and loud music from a car," Cartwright says.

Of course, the recordings raise issues of privacy, which Dove says he's eager to address.

"I think it's important at this point to say that the recordings we make are limited to 10 seconds that are not contiguous," he says. "We are not looking to build a rich picture of a particular location." 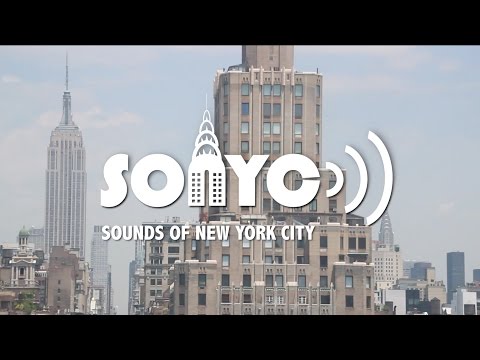 In other words, the researchers aren't using the sounds to spy on residents.

"That's entirely the word that we are trying not to say," Dove says. "We are definitely not spying."

He explains the project worked with independent consultants to make sure that the sensors could not pick up speech or recognize people.

"We are interested in noise at a more abstract level," Dove says. To prove this, he had one of his researchers stand under a noise sensor and shout the entire New York City noise code. The sensors couldn't pick up recognizable speech.

In a little office near the lab, Cartwright pulls out a laptop and plays some of the clips the sensors have recorded — a street cleaner, some kind of construction machinery. There are also online forums where the citizen scientists can chat with one another about what they're hearing.

Back outside at the sensor, nearly shouting to be heard, Cartwright and Dove reflect on how their quest for sound has shaped how they listen to and how they interact with sound.

"I'm pretty lucky in that the area I live in isn't that noisy, but when there are offensive sounds, I take note," Cartwright says. "I've reported things to 3-1-1, and I never did that before."

The researchers say they've started sharing the information with the New York City Department of Environmental Protection to help the agency get a better sense of sound in the city, so they can eventually implement policies to reduce it.

"It's changed the way I look at the city in that I now look for opportunities," Dove says, adding that when he comes across big construction sites on busy intersections "with a lot of beeping," his immediate thought is, "This would be a great place to put a sensor!"

Karyn Miller-Medzon produced and edited this story for broadcast with Tinku Ray. Samantha Raphelson adapted it for the web.