Coldplay isn’t planning a tour for its most recent album — but the rock band has different reasons for putting performances on hold than the Beatles and One Direction.

Frontman Chris Martin recently announced plans to pause touring because of concerns over the environmental impact of the band’s concerts. 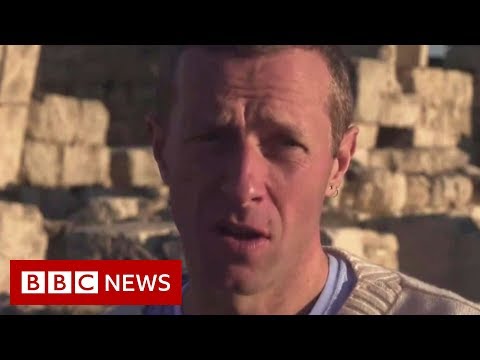 And Coldplay isn’t the only British band with environmental concerns: Massive Attack is teaming up with the University of Manchester's Tyndall Centre for Climate Change Research to brainstorm how to limit carbon emissions on tour.

Director Carly McLachlan says the center plans to look at the environmental impact of the three different aspects of a tour — energy used at the venue and travel emissions for both bands and their audiences.

Researchers plan to investigate how venues can use energy-efficient lights and sets, and sustainably generate energy, she says. They hope to determine how bands can order the stops on a tour to avoid flying back to the same areas and venues multiple times.

Plus, hundreds of people traveling to a particular location for an event produces a significant amount of emissions, she says. But music and arts events give creators a chance to share a message with fans, she says.

“Particularly with music or with anything from kind of arts and culture … they also have this communication with their audience,” she says. “And by doing something around trying to tackle climate change, they potentially send kind of a larger signal.”

The Tyndall Centre is excited to work with Massive Attack, who McLachlan says are committed to sustainability and understand the urgency of climate change.

The band reached out to the organization after Massive Attack tried to offset tour emissions ⁠— but decided to “positively disrupt” the industry by driving down their environmental impact instead of just calculating and offsetting it, she says.

Famous groups like Coldplay and Massive Attack have the power to send a signal across the industry and influence smaller bands who feel they must accept the conditions offered to them, she says.

“These high-profile bands can help to catalyze change across the industry potentially,” she says. “So they have more power to be able to see what they would like from the people that book them, from the venues, how they'd like their tours to be managed.”

The organization plans to report to Massive Attack this summer and then share their findings with the rest of the sector. McLachlan hopes this research will spark a widespread conversation about finding a low-carbon approach to touring.

Music industry professionals don’t consider emissions when booking tours, so there’s potential to reduce their environmental impact by targeting “low-hanging fruit,” she says. That could reduce travel and costs for bands, she says.

The music industry isn’t alone in this challenge: Every sector needs to look at how it can reduce emissions because climate change is an urgent issue, she says.

Many conversations about sustainability focus on longer-term goals like decreasing emissions by 2050 — but McLachlan says we need to act now to avoid the worst impacts of climate change.

“Don't think of this as something that your kids are going to sort out,” she says. “You have to sort it out now for your kids.”

Ashley Locke produced and edited this interview for broadcast with Kathleen McKenna. Allison Hagan adapted it for the web.