For the third consecutive year, musician PJ Morton is up for multiple Grammy nominations, including Best R&B Album and Best R&B Song from his latest album “PAUL.”

Receiving a Grammy nomination — he’s been nominated a dozen times over the years — “never gets old.”

“It's also made me very comfortable with losing Grammys,” he says, laughing.

These accolades are not only a professional notch for Morton — but a personal one, too.

Just a few years ago, Morton, who is also a keyboardist for the band Maroon 5, had actually thought about giving up on the idea of a solo career.

Producers wanted his solo album to contain radio hits, something that didn’t sit right with him. He already had plenty of top chart songs with Maroon 5, and this time, he hoped to make his music — and the message behind it — convey exactly what he wanted.

“It just showed me that I wanted to go deeper and to mean something more than just a hit,” he says.

This, along with the expense of living in Los Angeles, sparked his move back home to New Orleans, Louisiana — a decision he says ultimately brought him and his music closer to his true self. There he founded Morton Records and crafted his award-nominated album, “PAUL.”

“I'm like, man, I'm trying to get away from music, but it's needed and I can't complain about it if I don't do anything about it,” he says.

After his solo tour ends, Morton will be back on the road with Maroon 5. Meanwhile, he says he’s looking forward to working on both the creative and business side of Morton Records.

“A lot of my energy now is going toward making sure that there's more music after me,” he says. “That's become really important to me.” 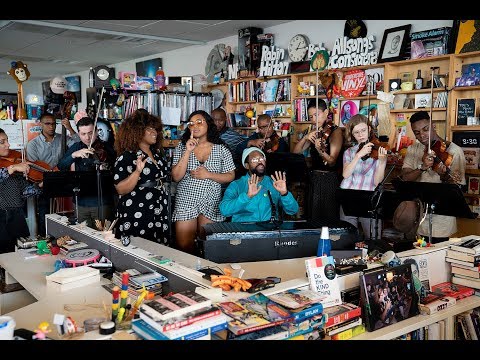 On moving out of LA and making “PAUL”

“Well, [the move] was probably a bunch of layers, but one of the things was I found success with Maroon 5, and we've been doing very well since I've been in the band almost 10 years now. So I think that started to satisfy the competitive side of me in music. So I started to lean more internal as far as the solo stuff. I wanted to say something and I wanted to say it the way I wanted to say it. And musically, I wanted it to sound the way I wanted to sound. I was blessed enough to have all these hits with Maroon. So I think it just started to make me hate that competitive side of it. It's like, man, I'm blessed enough to be in this huge band and we're doing great. You know, I've wanted that my whole life to play the Grammys into playing SNL into, you know, we played the Oscars, all these things. So it just made it harder for me to hear these critiques when I went to these labels and was talking about my music.”

“I remember specifically them asking me to work with certain producers who were hot on the radio right now, but had nowhere near my sound or 'Hey, what do you think about you know, just let us give you one just one radio-type hit and then you could do whatever you want.' It was just harder for me to hear all that stuff. So the fact that they were trying to make me an experiment when I'm in a band that just had five No. 1 hits, and it just showed me that I wanted to go deeper and to mean something more than just a hit. So that was part of it. LA being super expensive was a part of it. I'm like, ‘What am I? I don't have to be here.’ It was a combination of things that just I felt like it was time to go.”

On what he found when he moved home to New Orleans

“Yeah, what’s crazy is I didn't know exactly what I was looking for. I just felt a pull to go home. Before LA, I'd lived in Atlanta, college I lived in New York and then LA, so I'd been all these places, and I just felt a pull to go home. I didn't know exactly why. My plan was to not do music, but to start a sneaker store. And I've always been the young buck of the crew. I started playing very early at 14. And I got back and I realize not just in age, but in now and in career wise, I was in a place that a lot of my friends and lot of these artists had not been to. And I had to accept that maybe I'm a leader now. I didn't expect that ... and not the baby anymore. These guys were looking to me for certain answers, and that is kind of how Morton Records was started to form in my mind.”

On his music taste

“I knew a lot of his collaborators while he was around, but I don't think he was after his death that is his message and his spirit hit me. I felt like it was a call to action. I just didn't want his life to be in vain, and it just inspired me to bring to action to do what he was doing. I just felt like if we mirrored what he did around the world, it could be a special thing.”

On investing in the community

“I have an initiative right now with Liberty Bank here in New Orleans, where we are focusing on that. You know, talking about banking black and understanding the more we invest in those banks, the more they can loan to people like us.”

“I'd like to think I am [optimistic]. Nothing lasts forever. Seasons change, as is the weather. Yeah, I just believe that what my ancestors went through, we're still here and still surviving. There are always dark times and I think the dark times make you appreciate the better days, you know? And I just feel like we're in a pretty dark time right now, but I just don't believe it'll last always.”

On what he enjoys most about performing live

“I think it's the connection. Being a church kid, a preacher's kid, who grew up at church and watched the call and response was always my favorite thing. Hearing people scream out, hearing people be impacted immediately, you know, is such an instant gratification thing. I love to play and see people react to it right there in that moment. There's nothing like that.”

Ciku Theuri produced and edited this interview for broadcast with Kathleen McKenna. Serena McMahon adapted it for the web.