This month, an iceberg nearly the size of Atlanta broke off in Antarctica.

The glacier, known as Pine Island, is considered one of the fastest retreating glaciers in Antarctica, where the climate is changing rapidly. Some parts of the content recently experienced record-high temperatures of nearly 70 degrees Fahrenheit.

The loss of large ice chunks, known as calving, is a routine process that happens to every glacier. In the past, Pine Island would calve every four to six years, glaciologist Alison Banwell says. But now, calving events occur “almost annually” on Pine Island, she says.

Pine Island Glacier is important in particular because it has the ability to raise global sea levels by four feet in total, she says. The glacier is also the biggest single contributor to global sea-level rise of any glacier on Earth, she says.

“Rising sea levels — even just by a few centimeters, even a few millimeters — is going to start flooding low lying communities worldwide,” she says. “So many towns and cities are almost at sea level at this point.” 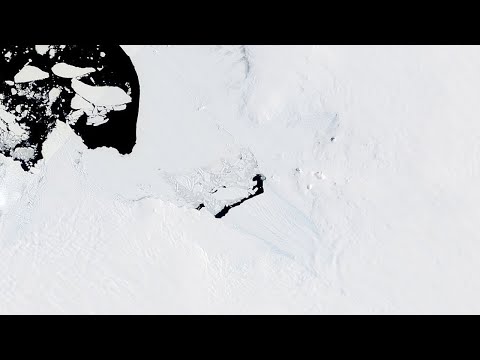 Scientists are worried about the future of Pine Island Glacier because its ice is retreating at an accelerated rate, exceeding 35 feet per day, she says.

The glacier was once buttressed against a tributary ice flow, she says, but after a calving event in 2018, Pine Island “lost contact” with the tributary ice, meaning it now has “less support” and is susceptible to cracks.

“So it has nothing to buttress up against at this point,” she says. “So it's much more likely to calve in the future.”

These massive calving events are a result of two climate change-related factors — rising air temperature and ocean temperature, she says. When the ocean warms, the glacier’s ice shelf starts melting off because 90% of a floating glacier is in the ocean.

The melting ice shelf is not going to directly contribute to sea-level rise, she says. But the ice shelf acts as a wall, so when it melts, she says, the wall crumbles and lets melting inland ice flow into the ocean.

Cristina Kim produced this story and edited it for broadcast with Todd Mundt. Serena McMahon adapted it for the web.