Put on the headset: You’re on a dark city street below glittering skyscrapers. Look down and there’s your body, your robotic hands and metallic feet. Look up and there’s a neon pink enemy charging at you. You strike first, your real hands transformed into virtual weapons. The enemy robot goes down in a flare of light.

Take off the headset: You’re sitting on the couch in the living room. Sunlight pours in through the window.

For decades, this kind of fully immersive experience has been the promise of virtual reality gaming. Instead of watching stories play out, you can live them.

And in the last few years, those visions have started to become reality. But some say VR gaming hasn’t lived up to its potential yet.

“2020 is once again being declared to be VR's make-or-break year,” says Robert Morgan, who creates VR games and experiences. “Now, people have been saying that since roughly 2014.”

Virtual reality has existed in one form or another for decades. Since the term was coined in the 1980s, VR has been used to train pilots, assist doctors and help patients with PTSD, and the number of applications just keeps growing.

But the era of modern VR gaming started just about a decade ago. And in 2014, Facebook made a $3 billion bet on VR when it purchased the headset manufacturer Oculus.

“Oculus has definitely become kind of the Kleenex of virtual reality,” Morgan says.

As investors poured hundreds of millions of dollars into VR, Facebook put its own cash into funding games in the hopes that better experiences might attract people to buy the gear.

All that money has led to a lot of content. You can play VR Fruit Ninja, solve puzzles with “Doctor Who” and battle alongside Marvel heroes like Spiderman. One popular game is just a simulation of basic office tasks.

Still, Nielsen data shows fewer than 6 million VR headsets were shipped last year, barely more than in 2018. That’s just a fraction of the tens of millions of traditional gaming consoles sold each year. And the total amount of money invested in VR has dropped in recent years.

“Especially in the beginning, my reaction [to VR] was, where's the beef?” he says. “Where's the real meat? So I set out to make the kind of games I like to play.” 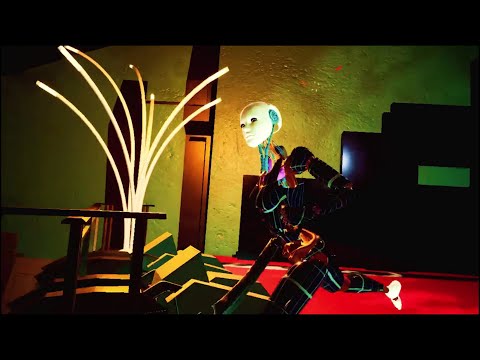 Matalon says he was looking for a game that combines combat with problem solving in a big, open world ripe for virtual exploration.

He and his co-founder Michael Clebnik thought they could build that game on an “indie budget,” working out of Matalon’s basement and Clebnik’s modern house in the suburbs of Boston. Both pioneers of the early internet — Matalon designed websites for bands such as Aerosmith and The Rolling Stones, and together they started an early e-commerce site — they couldn’t resist the pull of VR.

“I've been a gamer my entire life,” Matalon says. “But this allows you to be a character in a game instead of manipulating a character on screen.”

He says VR gaming is worlds away from regular gaming — the difference between watching “Friends” on the television and sitting on the couch at Central Perk between Ross and Rachel.

“When you play a regular PC game you're driving [the character] around,” he says. “Even when you're in first person, it's still on your PC screen. You look around, and there's your roommate eating crackers. [But] when you put on that headset you're completely immersed in a world … you can be anywhere.”

In “Orion13,” the character whose body you step into is the game’s eponymous combat robot. Her memory implants have malfunctioned, and she’s now self-aware. Your job is to hack and slash through a dystopian city full of unfriendly robots — and solve a few puzzles — to get her “home.”

To an observer, “Orion13” looks a little like Wii Tennis on steroids. Swing your arm out farther in the real world, and Orion13’s sword will deal greater damage. And with enemies coming at you from all directions, a stroll through the virtual world turns into a very real workout.

But the intensity of the gameplay brings up one tricky question: What’s the real-life effect of virtual reality violence?

Seth Mantie, a Metro VR Studios producer who works with Matalon and Clebnik, points out that research has shown no evidence linking real-life violence to traditional video games.

Still, experts have raised concerns about violence in VR.

“Fantasies involving violence are likely to be more damaging in an immersive setting than they are in a video,” Thomas Metzinger, a philosopher at Johannes Gutenberg University in Germany, told New Scientist. “There is a danger of people getting used to not only observing but also carrying out such acts, because they are embodied in an avatar.”

“Orion13” is unlikely to draw criticism on that front. The heroine’s primary weapon is a sword, and enemies absorb the cartoonish blows with special effects in a dizzying array of colors until they collapse bloodlessly — they are robots, after all.

But Clebnik does think some VR games push the limit of gratuitous gore. He says developers should be conscious of what they’re building, for exactly the same reason that VR is appealing.

“It's spectator sport versus participant sport,” he says.

“Participant sport” is an accurate way to describe the game he’s developed. “Orion13” is an experience that makes you forget where you are in the real world.

But is that enough? Clebnik and Matalon have high hopes that the game may turn a profit. Still, Metro VR faces the same challenges that have plagued the fledgling industry since its inception — namely, the barriers that keep less-than-hardcore gamers from committing to VR.

First, there’s cost: Many VR headsets require a gaming laptop in addition to the gear, which can easily add up to more than $1,000.

Then there’s the nausea and physical discomfort you might experience when you put the headset on. Clebnik says some people are more tolerant than others.

“It does change where you are in the room … and it is a little uncomfortable,” he says. “What we’ve seen is the more time people spend in the environment, the more comfortable they become with it.”

And there’s the inconvenience. You can’t scroll through Facebook while you’re in the middle of a simulated fantasy world. (Not yet, anyway.)

“There's a friction to stepping into virtual reality,” VR writer Morgan says. “When you're trying to sell entertainment products for people to use at home, the fact that they go into their space helmet and they can't see their dog or their beer or their family, it's a major factor that reduces the appeal of these types of experiences.”

Clebnik agrees. He points to the failure of the Google Daydream, a VR-via-cellphone headset that the company discontinued last year. A Google spokesperson told The Verge the product wasn’t as successful as the company had hoped.

“Most notably, asking people to put their phone in a headset and lose access to the apps they use throughout the day causes immense friction,” the spokesperson said.

But Matalon says that distance from the real world is the whole point.

“I think what we've seen is people want more interaction with their content,” he says. “Movies have gotten longer. They include all the extras and the backstory.”

Matalon may be right. There are signs that 2020, if not the make-or-break year for VR, could still move the goalposts.

Oculus and Valve, another headset manufacturer, both sold out of some models over the holidays, with shipping delays of more than a month. And the Oculus sales were driven by its newest headset, the Oculus Quest.

Unlike other models, the Oculus Quest doesn’t require a gaming laptop or a console. You just slide on a headset and slip into another world. Standalone gear like the Quest made up half of all headset sales last year, compared to just 20% the year before, according to Nielsen data.

Bringing down the barrier to entry could mean a lot more people give VR a try, even casual gamers. Clebnik thinks that’s how VR will really take off.