As protests continue across the country, some footage from the news and social media shows officers attacking peaceful protesters.

On Monday, the National Guard used force and tear gas to clear peaceful protesters from around the White House ahead of President Trump’s walk to a historic church, where he took a picture with a Bible. And over the weekend, police and protesters clashed in many cities. Video footage surfaced of two New York Police Department officers using vehicles to push into a crowd of demonstrators.

But the opposite scene played out in some cities.

In New Jersey, Camden police officers joined the frontlines of a march on Saturday. Meanwhile, hours into a peaceful demonstration in Spokane, Washington, on Sunday, officers knelt in solidarity with protesters.

And in Flint, Michigan, police put down their weapons and marched with protesters. Chris Swanson, sheriff of Genesee County — which includes Flint — says the move wasn’t strategic or planned, but rather “came from the heart” after a week of intense clashes between police and communities.

Swanson says “the fear started to melt” as fist bumps and hugs were exchanged between protesters and officers. That’s when his officers put down their batons, and Swanson took off his hat and walked into the crowd. He says he told one of the protest’s organizers that the officer who knelt on George Floyd’s neck is “not who we are.”

He then addressed the crowd with the same message. He says they replied to him and the officers, saying “walk with us.”

As the nation continues to protest the death of Floyd and more broadly, police brutality, Swanson says police leaders need to recognize and address the racism that brought the country to a "boiling point."

Members of law enforcement are meant to protect and serve the people, he says, and that means officers — and the act of policing — must be held to a high standard.

“George Floyd changed American policing because we have to do things differently,” he says. “Recognize what's there. Listen to the people.” 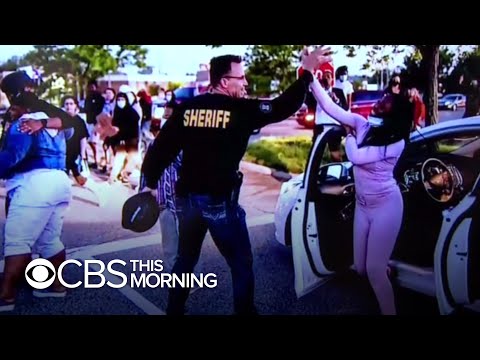 “Well, I can only answer for what happened that night. And when I say that it's because we dealt with protesters that had a message and that message was change. The folks that are burning cities down that are not theirs, that are going to businesses and looting, they are not the protesters. They are not the ones with the message. Even the Floyd family called [them] out. You can't have lawlessness. I get that.

“But I want to tell you, through time and through healing, we're going to get back. You can already see the change. We can see police agencies across the nation now change philosophies, whether they learned it from Flint, Michigan, that's not for me to determine. But I'm telling you, we see a change in heart. And I believe those big cities, New York, Washington, LA, they're going to heal and it's going to get back to where we want to be.”

On whether some authorities have crossed the line during protests

“You know, it's hard to see. And when you see images like that, and we see people that are peacefully protesting because that's a First Amendment right. And whether it's a riot, a demonstration or protest or on a traffic stop, you can't take away people's constitutional rights. So individually, if somebody has the intent to hurt and harm in law enforcement, that's how we got here in the first place. We saw somebody on the back of a neck of an individual who had rights, and that act right there brought us to where we are right now. When you saw the same reports that I did last night, what's happening in New York and in LA and D.C., how do you justify what got us there? You can't. You can't. That's not what policing is about. Policing is about protecting and serving.”

“Throughout our history, we've had journalists on the front lines. The risk that journalists put is as noble as those fighting the frontlines. I talked to a reporter yesterday whose own friend was shot in the left eye and blinded by a rubber bullet. That breaks my heart as much as anything else does. So for people to do their job and to be injured, that's no different than a police officer getting injured or a nurse getting injured — that's a frontline worker. You can't justify that. Certainly, there's no excuse if it was intentional. They're there to tell the story, not to be a victim.”

“I can't agree that it doesn't exist. It's a reality. You saw the frustration. You've seen cases throughout. And when law enforcement doesn't call the wrong a wrong, it doesn't respond in a way that would be normally responding if a civilian did what happened, that's where the boiling point comes from. Racism, whether it's African American, Latino against white, it doesn't matter.

“Law enforcement has to be unified. When we have people making decisions based on race, based on religion, that goes against everything America stands for. And when I say I can't agree with it, it's because I know it. We've disciplined people in our office that have crossed over racial lines. We fired people that have assaulted people. I have a guy in jail right now who committed a sexual assault while on duty. Police need to be held to a higher standard. And when you have a law enforcement, who have the power from the people, the authority from the people, violate that code, they need to be held to that standard. And if it becomes a racial issue, it's even that much more important. That's how we got here in the first place. And every police executive around the nation needs to recognize that.”

“I love my job and I love it in spite of all that's going on. I was just asked the question about all cops are bad. The acronym that's going around and that breaks my heart. That part hurts because we're not. We are the people's guardian. We are the ones that you call when nothing else can help. ... We have people that have given their lives on the way to calls, protect people they don't know. But you're always going to have folks that take away and detract from that. And that we have to continue to root out. I love what I do. And anybody who is considering law enforcement, you don't do it for the fame and fortune. You do it to serve people. If we ever forget that law enforcement is more than just traffic stops and 9-1-1 calls, but it's to serve people, then we have lost what the meaning of law enforcement is.”

Francesca Paris produced and edited this interview for broadcast with Tinku Ray. Serena McMahon adapted it for the web.