Jazz singer Candice Hoyes is often described as a musician-cum-activist because her music is a celebration of Black womanhood.

Her latest work, "Zora's Moon," is her response to this moment of racial reckoning and what she calls an ode to Black girlhood. The title track in particular explores those themes through the life of writer Zora Neale Hurston, Hoyes says.

“I feel like Zora Neale Hurston has had a connection to me since the first day I turned the page of 'Their Eyes Were Watching God' when I was in high school,” she says. “And I was immediately connecting with so much of the issues she was referencing — colorism and sexism, the negotiation of what's respectable behavior — all those things that a Black teenage girl is defining for herself.”

Then when she was an undergraduate at Harvard, Hoyes says she read Hurston in a sister circle during a Black women’s history course. This further exploration into Hurston’s work shaped the artist she is today, she says.

“It's a circle of female empowerment, of affirmation, where you can look to be felt and heard when you speak and when you explore new ideas. It's an expansive, intellectual and spiritual space,” Hoyes says. “It was very powerful for me to be able to take those risks, and I feel like it really shaped the artist I am now.”

“Zora’s Moon” also uses a sample from a 1943 radio interview between Hurston and pioneering radio host Mary Margaret McBride where Hurston talks about the idea that many children think the moon follows them.

Hurston’s message still resonates today because it emphasizes the connection between the childhood experience and Black identity, Hoyes says.

“As I connect with Zora, the moon goes through phases, but the moon itself never changes,” she says. “And the moon and the story about the moon become like a portal for me into the next work I want to make. It becomes an affirmation, and it closes a certain sister circle between myself and Hurston.” 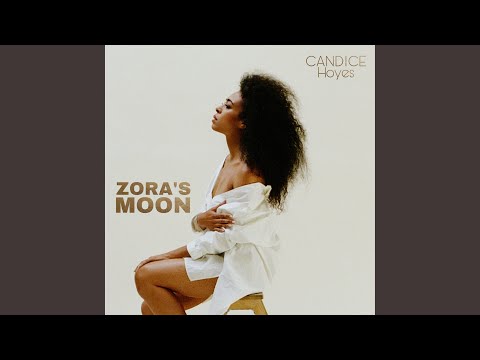 “I'm greatly influenced by Toni Morrison. I'm greatly influenced by Roberta Flack, Minnie Riperton, Billie Holiday, Sarah Vaughan, Leontyne Price. Oh, I have many influences across the disciplines. I think that the value of being an archivist and providing historic insight in my work [is] it expands the space that I think is needed, the sort of necessary growth of the cannon to embrace my community, Black community, that have a history of being obscured, of being marginalized. I see myself along a sort of magical journey with this work.”

On her song “Tired,” which is a musical reimagining of a Langston Hughes poem

“I think that my songs are not only layered and sort of drenched in my own childhood sense of self, but I'm also very interested in engaging with girls today. And so I think having a sense of, you know, a futuristic tone is a part of my work. I also would say the futuristic sound also relates to why I love archives, because unlike my predecessors, this generation has the benefit of digital histories.

“In 'Zora's Moon,' that interview that influenced me so much, and to be able to take a poem from the '30s and situate in a context that feels like, you know, much more like my lifetime. I've actually sung Langston Hughes poems set by classical composers in the lyrical style, and I've performed that and I always felt that the Langston that I know would sound different today. And it really made me kind of pick up my pen and write what I felt my people would want to play at the barbecue, play around the table, play in the basement, play in your car. Those are the spaces where I want to bring this powerful poetry to. It's an affirmation. It's encouragement. It's a way to fortify people in this difficult time.”

“I would say we are in a period of racial reckoning. It doesn't mean that the solutions and the structural remedies are very expedient or that they are easy to understand. It's going to take extended conversation. It's going to take extended engagement. And so I think that my life in activism and archival history is going to really come to bear now because it's not something that is a new impression for me. This is something I've thought about a long time.

“In that way, I think that being an artist has always helped me to focus on my voice, no matter how many people may not agree at a table or a room. There's a certain inner sense of self that I return to, and that's what emboldens me to do something that I feel is necessary as an artist. And then I think that that is the same place, the same place in me that my sense of activism, you know, links up to. And so I have always believed that in the power of my own voice, but I also believe that if I have that gift, that I would like to foster that among other people … whether it's a circle or a community or a classroom, whatever community I'm in.”

Cristina Kim produced and edited this interview for broadcast with Peter O'Dowd. Samantha Raphelson adapted it for the web.