Scientists in Antarctica have found life flourishing in some of the most inhospitable conditions on Earth.

After drilling through more than half a mile of ice, researchers plunged a camera another 1,600 feet down to the Antarctic seafloor and were stunned to discover sponge-like animals clinging to rocks.

Their findings, published in a recent study in the journal "Frontiers in Marine Science," include several potentially new species.

Huw Griffiths, a British Antarctic Survey marine biogeographer and the study's lead author, says a team of geologists was trying to collect a mud sample from underneath the ice shelf but kept hitting a large boulder. The team deployed their equipment with a GoPro camera attached to see what the hold up was, he says.

At first, the rock was a “massive inconvenience” that impeded them from retrieving a sediment sample, he says. But when they showed the video footage to biologists back in the United Kingdom, Griffiths took a closer look. 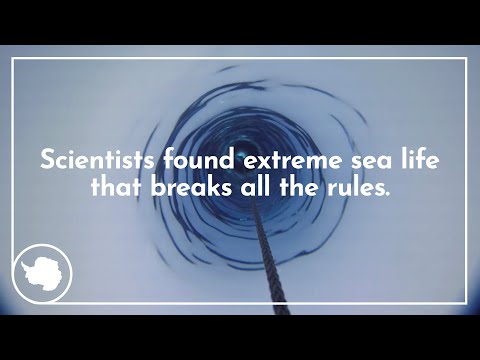 The geologists told Griffiths they could “see a few strange shapes and they weren't really sure what they were,” he says. Initially, he figured the objects were typical deep sea sponge organisms.

But when geologists revealed where the sponge sighting took place — hundreds of miles away from food — Griffiths believed the researchers had stumbled upon something extraordinary.

When it comes to the deep sea in the Antarctic region, researchers have a 80% to 90% chance of discovering something new to science, he says.

Scientists don’t believe the sponges are related to other creatures they’ve been finding on Antarctic ice shelves, he says, “but until we actually manage to get our hands on one, we'll never be able to answer that question.”

Other questions remain until the sponges are examined in person. Their bleak, freezing environment has no light or food sources, Griffiths says, meaning any food they come across has to drift in sideways over extremely far distances.

“The chances of getting food are really low. That raises questions about how often these animals even feeding,” he says. “We know that some Antarctic sponges can live a very long time, even up to tens of thousands of years. So are these things only feeding once a year or once a decade or once a century?”

The habitat they're living in is directly under a huge ice sheet that is threatened by climate change, meaning there’s a chance scientists could lose the opportunity to learn more about these mysterious animals.

If nothing changes in how humans respond to climate change, he worries about the impact on Antarctica’s environment. Fortunately, the ice shelf these creatures live under is relatively stable, he says.

The discovery of these sponges proves there’s more to unearth in the depths of the ocean, he says.

“We've got this enormous part of the world's sea floor that we know nothing about, really,” he says. “So to go there and find something that we didn't think could live there really makes it even more exciting as a habitat.”

New technologies and work strategies will need to be developed to help scientists “get a window into their world,” he says. It will be a challenge, Griffiths admits, but he’s up for it.

Chris Bentley produced and edited this interview for broadcast with Tinku Ray. Serena McMahon adapted it for the web.