Kenneth Chamberlain Jr. remembers the day he lost his father.

On Nov. 19, 2011, police knocked on his father’s door. Chamberlain Sr. had accidentally triggered his LifeAid alert button while sleeping, and the company sent the police to check on him.

When Chamberlain Sr. answered the door, he told officers he was fine, and he didn’t need medical assistance and hadn’t called.

Despite Chamberlain Sr.'s assurances that he was all right, the situation escalated. The police persisted to enter the home for 90 minutes. They berated Chamberlain Sr., banged on the door, yelled at him and mocked his military service. In an audio recording from the incident, one of the officers used the N-word.

“[The police] were there for a medical emergency,” Chamberlain Jr. says. “So there was no need for [the officers] to try to come inside after he said that he was all right.”

It was the police’s job to diffuse the situation, but all they did was create one, he says. In calls from that day, Chamberlain Jr. says police were told they were responding to an emotionally disturbed person. Chamberlain Sr. had diagnosed mental health issues.

“This is just a classic example of race and class playing a role and how you respond to different neighborhoods in cities,” Chamberlain Jr. says.

Officers eventually broke in, tasered Chamberlain Sr. and shot him with live ammunition. He later died at the hospital.

Chamberlain Jr. received a call from a friend who was a resident at the same building as his father. Before the friend could explain what was unfolding, Chamberlain Sr. had been shot by police.

Chamberlain also learned that the LifeAid monitoring station had suggested to the police department that they call him. But they refused.

In one scene of the film, Chamberlain Jr.’s cousin approached the officers and tried to explain her uncle’s behavior and his heart condition. But the officers cut her off.

That’s accurate to what really happened, Chamberlain Jr. says. In the audio recording from that day, officers asked Chamberlain Sr. if he had any family and Chamberlain Jr.’s cousin could be heard shouting, “Yes, he does!”

“Unfortunately, we have a system of justice in place, it doesn't place any value in the lives of Black or Brown people,” he says. “So we are constantly fighting. We're constantly trying to get some semblance of justice.”

This November will mark a decade since the death of Chamberlain Jr.’s father. He has come to the conclusion that there will never be justice for his father, but hopes for accountability instead. 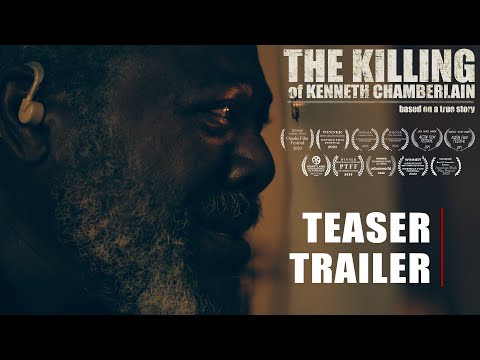 After widespread protests against police brutality and racism sparked last year, the district attorney of White Plains, New York, announced her office will take another look at the case.

The deaths of Taylor and Floyd are leading more elected officials and prosecutors to look at these kinds of cases again, Chamberlain Jr. says. But, he adds, Derek Chauvin’s conviction for the murder of Floyd shouldn’t be the blueprint for fighting injustice.

“That conviction represents accountability on the smallest level, but not justice,” he says. “Because there can be no justice when the rates of shootings and killings remain steady.”

Chamberlain Jr. also hopes that the film will reignite the conversation and become a teaching tool of what not to do.

But watching the film isn’t easy for him, no matter how many times he’s seen it. He cries every time.

“My dad was my superhero,” Chamberlain Jr. says. “He was a man of integrity, a man of honor. And what happened to him shouldn't have happened.”

Instead of thinking of his father’s final moments, Chamberlain Jr. chooses to think of different memories of his dad — moments that were happier, like his high school graduation.

When Chamberlain Jr.’s name was called during graduation, while he could hear clapping, he could still hear his father’s voice over everyone else’s.

As he made eye contact with his father, Chamberlain Sr. threw his hands in the air, shouted “Yes!” and fell to his knees.

It was a day Chamberlain Jr. would never forget.