It’s officially fall — a wonderful time of year when brown bears in Alaska get ridiculously fat feasting on salmon.

Mike Fitz, founder of Fat Bear Week and naturalist for explore.org, is a former Katmai park ranger. Seven years ago in the visitor center, he and some other rangers saw a webcam viewer showing a side-by-side image of a bear in the early summer compared to the late summer.

The stark difference in the photos sparked an idea: match up before and after photos of bears as a competition to see which bear was the fattest, he says.

The one-day Facebook tournament bracket contest that was quickly thrown together has now evolved into a week-long competition.

Many won’t even get the chance to witness these omnivores fishing for food along the Brooks River in Katmai National Park. The habitat there is ideal for hungry bears to devour salmon for long periods of time.

Scientists at the University of Alaska in Fairbanks found that in Alaska, four of the five species of salmon — a staple in bears’ diets — have declined.

Fortunately, Fitz says the bears in Katmai will “probably be OK” because of their resiliency in the face of change.

Plus, he says the Bristol Bay run of sockeye salmon is “sort of a beacon of hope right now because it is doing extremely well and the bears are benefiting from that.”

These bears don’t play around when stocking up for hibernation: The largest bears at Katmai are estimated to be between 1,200 to 1,400 pounds, Fitz says.

To put that incredible weight gain into perspective: Cubs at birth are about 1 pound and equal to the size of a soup can, he says.

Grazer, a plump new mom to two yearling cubs, is among the fan favorites this year. The extremely defensive mother bear gets ferocious if another bear even wanders near her family’s vicinity, Fitz says.

Chunk, an “extremely hefty” male bear, is notable for the scars across his dark brown fur and his “big butt” for which he received his nickname, he says. Chunk has been chubby since his young cub days, he says.

Otis, a portly older adult male with one floppy ear, is another high-profile contender. He boasts a long list of accomplishments: Otis was the inaugural Fat Bear Tuesday winner in 2014 and twice crowned Fat Bear Week champion.

Fitz says Otis, a “charismatic bear,” faces different challenges than the younger bears because of his age — but that has fans rooting even harder for him.

Participants really get into the competition. Some launched social media campaigns for their favorite bears while others committed to eating salmon dinners and drinking honey beer for an entire week in celebration. Fitz says he never expected the idea to take off like it has and is happy to see how much joy it’s brought people across the world.

He’s also pleased to see Fat Bear Week serve as an educational tool for humans to better understand bears, their ecosystems and modes of survival.

The Fat Bear Week winner doesn’t get a salmon feast handed to them or a belly rub, but Fitz says they do get worldwide recognition for their impressive heft.

Voting is open until Oct. 5. May the fattest bear win! 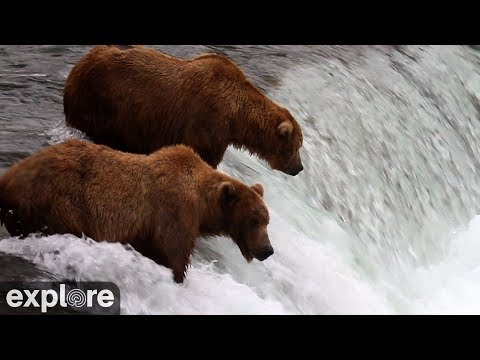 Ciku Theuri produced and edited this interview for broadcast with Todd Mundt. Serena McMahon adapted it for the web