You may have seen dancer Misty Copeland on TV, on stage or even on tour with Prince, but she's a classically trained ballet dancer who starred in “Swan Lake” and many other works.

In 2015, Copeland became the first Black female principal dancer at the American Ballet Theatre, known as ABT, and has also written several books.

Her latest, “Black Ballerinas: My Journey to Our Legacy," is a nonfiction book for kids. In it, Copeland tells the stories of the women who came before her, who often faced discrimination and exclusion by the white-dominated ballet world of the early 20th century.

Many of those ballerinas found a home at the Dance Theatre of Harlem, the country's first Black ballet company. The company, founded in 1969 by Arthur Mitchell and Karel Shook, performed around the country and the world.

Copeland says she believes it’s her responsibility to tell the untold stories of trailblazing Black ballerinas who came before her. At a WBUR CitySpace event in December, she credited them with paving the way for her to shine in her craft.

She wants aspiring young Black ballerinas and parents wanting to put their kids into dance classes to know that they do belong.

“I've struggled with that once I became a professional, being the only Black woman at ABT for the first decade of my career,” Copeland says. “How do I fit in?” 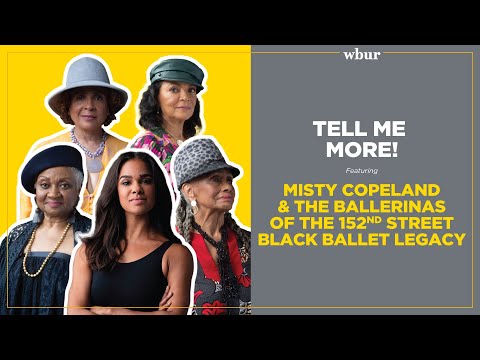 That sentiment struck a chord for Carla Shelton Benjamin, former ballerina at the Dance Theatre of Harlem. As part of the Colorado Ballet in her early dance years, she was the only consistent Black ballerina in the company.

It wasn’t until she witnessed Lydia Abarca Mitchell on the cover of Dance Magazine in 1975 — the first Black female ballerina to appear on the magazine’s cover — that she discovered there were Black ballerinas, let alone an entire dance company of them.

In the fourth grade, future cover star Abarca Mitchell remembers performing a choreographed dance on stage to “Waltz of the Flowers” from “The Nutcracker.” Her teacher, a nun, rushed to Abarca Mitchell’s mother afterward.

“I don't know what I did on stage,” she says, “but she told my mother, ‘you have got to get this girl formal training.’ ”

She auditioned at The Juilliard School and received a full scholarship. After years of dancing at Juilliard and then Harkness House for Ballet Arts, taking classes she wasn’t interested in, she asked herself: “Why am I doing this?”

The summer she graduated high school, Abarca Mitchell’s sister informed her that there was a Black man teaching ballet in Harlem.

“I said, 'Well, maybe he'll make ballet interesting.' I'd never had a Black teacher before,” Abarca Mitchell recalls. “It was Arthur Mitchell.”

For Sheila Rohan, ballet entered her life after surviving the polio epidemic as a child. The doctor told her she needed exercise, so she enrolled in a local dance school. She knew instantly that she loved ballet, she says.

Rohan “never thought” she was going to be a professional ballerina because she never saw ballerinas that looked like her. It wasn’t until one day, her sister told her about Arthur Mitchell and his troupe in Harlem.

At first, she was too timid to audition. But her sister kept pushing Rohan to at least try.

Like Abarca Mitchell, Gayle McKinney Griffith studied dance at Juilliard. But university administration turned down her dreams to be a ballet major and suggested she take up modern dance. She remembers feeling crushed and “crumbling” outside the administration’s door.

At that moment, a friend approached her and suggested looking into Arthur Mitchell’s ballet company in Harlem. “I just packed my bag that same day and went uptown,” she says.

McKinney Griffith, Rohan, Abarca Mitchell and Shelton Benjamin all shared their memories of dancing with the groundbreaking Arthur Mitchell, who had been a dancer himself. In 1955, he became the first Black principal dancer at the New York City Ballet.

“He was a tornado, and we were caught up in it,” Abarca Mitchell says.

The ballet dancers represented a mission as part of Arthur Mitchell’s troupe, so they were to dress, act and speak properly.

One profound but simple act of representation was wearing dance garments that matched their skin tones rather than the traditional ballet pink color, known as European pink. They would dye their tights with tea and dust their pointe shoes with face powder, makeup and spray.

Racism in the ballet arts, Rohan says, meant people would make remarks about the Black ballerinas’ bodies — such as their chests being “too busty” or their thighs being “too thick.”

Copeland says she’s reflected on her debts to these four women. “You've all contributed to getting me to where I am. I wouldn't be a principal dancer with ABT without all of your efforts,” she says.

“But you should also know how proud we are of you, not just us, the whole dance community,” she says. “Just to see you in American Ballet Theatre and ‘Swan Lake’ and ‘Firebird.’ ”

“And we're always here for you,” McKinney Griffith adds.