The blockbuster Broadway musical "Six" tells the story of the six wives of Henry the VIII.

The show is nominated for eight Tony Awards including Best Musical. Legions of "Six" fans, called the "Queendom," show up nightly wearing tiaras and singing every word. And the recently released American cast album debuted at number one on Amazon.

Written by Toby Marlow and Lucy Moss when they were Cambridge University students, "Six" tells the story behind that catchy historical phrase learned by British school children: 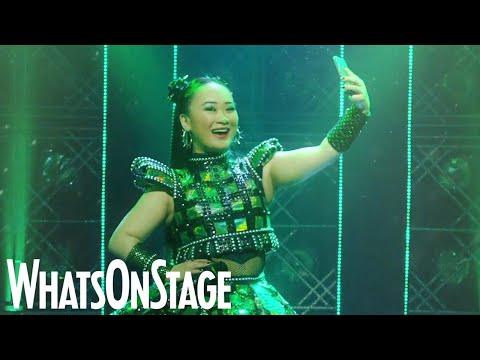 "Six" restores the women to their rightful place in history, with lives far more profound than the rhyme implies. The show casts the queens as a girl group, competing in a reality show to determine which had the worst fate and therefore deserves to be the group's lead singer. And as each takes her place front-stage, she also reclaims her story.

Up first, Catherine of Aragon, a devoted wife: She and Henry were in love. He made her a regent and she led a battle. And yet as she aged, he grew tired of her. She refused to accept that Henry wanted a divorce. Adrianna Hicks plays Kathryn and sings her empowering anthem "No Way.”

Then comes Anne Boleyn, Henry's second wife who hoped to bear him an heir. When she didn’t, she was tried on charges including treason and beheaded. Played by Andrea Macasaet, she sings the coquettish "Sorry Not Sorry".

Jane Seymour is said to be the Queen who most loved Henry — a love that the king returned. She died in childbirth and is buried next to Henry. Abby Mueller sings her gut-wrenching "Heart of Stone."

Anne of Cleves arrived in Henry's court as part of a treaty with Germany. He fell in love with her portrait — but when he finally saw her in person he’s said to have exclaimed that he did not like her full figure and dark complexion. That treaty with Germany gave Anne some leverage, so she fell into the divorced category. Anne is played by Brittney Mack, who sings the rousing "Get Down.”

Wife number five is Katherine Howard, who married a 49-year-old Henry when she was just 17 after gaining a bit of a reputation as a party girl. She’s used and abused by all in power, and a court rules Henry can behead her because of her "unchaste" previous life. Samantha Pauly plays Howard and sings the heartbreaking "All You Wanna Do.”

Henry's last wife Catherine Parr survives him and goes on to love again. She sings the ennobling "I Don't Need Your Love," which unites all the queens in the realization that they are victors, not victims or competitors — and at least on the stage over a hundred years later. After Anna Uzele left the show, Joy Woods now plays Parr.

Here & Now's Robin Young sat down with cast members Hicks, Mack, Pauly in New York this past fall when the cast returned to the stage after COVID-19 shut down Broadway was shut down for more than a year and a half. Young found the woman deeply affected, not just by the history they were embodying but by current events — from the pandemic to the #MeToo movement to Black Lives Matter.

Hicks said she missed "her girls,” all of whom evolved over the long break. Now, Hicks feels empowered every day by Catherine of Aragon.

Some of the actors giggled knowingly when Pauly shared that, like a lot of people, she'd had time for therapy during the COVID closing. And like her queen Katherine Howard, Pauly began to process her own traumas.

As Pauly sings the song "All You Wanna Do,” she said she takes her character from joking about sexual abuse and harassment to truly understanding that she's been used and abused. Pauly said she realized she jokes about trauma and "digs her nails into her fists" to get through as the song builds to its devastating end.

Mack, who plays the rejected Anna of Cleeves, shared how difficult it was for her to play a character called ugly night after night. It mirrors something she goes through every day as a full-bodied, full-lipped Black woman. She said she plays the character as a liberated divorcee with a great prenup, but also, in celebration of her own beautiful self. And she said she was empowered by the songs of others in the cast.

And all the women agreed with Mack that they were inspired by fans, like a woman of Indian descent who stood up, weeping, at a meet and greet and thanked them for the female power in their performances. Or a young girl grinning ear to ear in a photo on Instagram as she watched the show.

For Hicks, her role comes with “great responsibility.” A friend once said her Black daughter exclaimed "Mommy! She has hair just like me!" while watching Hicks perform — a comment that made it all worthwhile.

Find out more about "Six" here.

This article was originally published on May 31, 2022.