In the Sonora Desert in Arizona, the saguaro cacti grow tall and live long. One cactus known to locals as "Strong-Arm" stood more than 40 feet high and had 34 arms.

Strong-Arm lived an estimated 150 to 200 years. And early this month, it died.
“Our Strong Arm saguaro was really the anchor of our Tortolita Preserve,” says Jason Grodman, natural resources supervisor with the Marana Parks and Recreation Department.

The saguaro was part of the skyline and a landmark in this part of the desert just north of Tucson. It stood just off the main trail where hikers and bikers would stop for a photo op. A bike is dwarfed next to this grand cacti.

A recent blustery storm blew down the cactus, which was already weakened by bacteria.

The sight of the cactus’ arms splayed on the desert shocked Grodman. 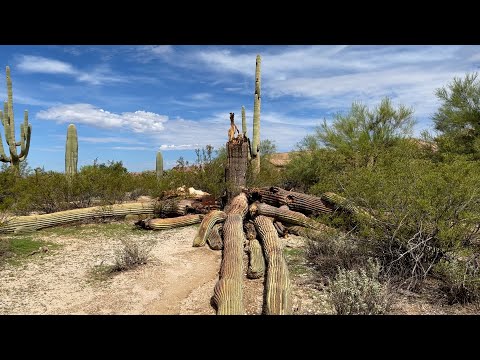 “Now in death, as the cactus will slowly decompose," its heavy arms will be left on the ground to breathe a little life into the desert for some time, Grodman says.

“Those arms will continue to house some moisture, which is extremely valuable to any species from coyote all the way down to the carpenter ant,” says Grodman.

Shirley Jahad produced and edited this interview for broadcast with Todd Mundt. Jahad also adapted it for the web.