News about southern governors shipping immigrants north echoes a political stunt by segregationists during the civil rights movement of the early 1960s: the Reverse Freedom Rides.

Many people view the coaxing of 50 migrants onto flights from Texas to Martha’s Vineyard as political theater paid for by Florida Gov. Ron DeSantis. Defending his move of the immigrants, DeSantis said, "It's better to be able to go to a sanctuary jurisdiction, and yes we will help facilitate that transport for you to be able to go to greener pastures.”

The words and actions of southern governors like DeSantis bear a striking resemblance to the acts of white segregationists 60 years ago.

During the Freedom Rides of 1961, civil rights activists rode buses to the South to push for integration of bus terminals in the Jim Crow era. That effort sparked a retaliatory response by segregationists who planned to send Black families north.

“[Segregationists] dropped the largest number [of people], almost a hundred, outside the Kennedy compound in Hyannis,” says WBUR reporter Gabrielle Emanuel. “Their goal was to expose what they called the hypocrisy of northern liberals.”

Black families were lured with promises of jobs and housing awaiting them. They were even told former President John F. Kennedy would greet them. 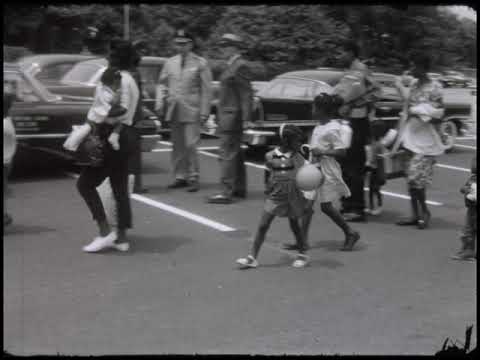 “None of this was true,” Emanuel says. “It was all a political stunt and really a publicity stunt.”

In 1962, Amis Guthridge, one of the segregationists who developed the plan, described it in an interview: “We’re going to find out if people like Mr. Ted Kennedy. The Kennedys, all of them, really do have an interest in the Negro people, really have a love for the Negro and a desire to help them.”

One family — Lela Mae Williams and her 11 children — all lived in a three-room house on a small farm near the Louisiana-Arkansas border. They boarded the bus and headed to Hyannis.

“My mom thought when she came to the North, she was going to have a better life for her children,” said Lela Mae’s daughter Betty Williams in an interview with Emanuel in 2019.

“It was all false promises,” says Emanuel.

In Hyannis, local communities and church groups organized to help the new arrivals. Assistance and donations poured in locally and nationally. Business and professional organizations criticized the bussing Black Americans north and boycotted the states involved.

“It was that attitude that prompted southern newspapers and radio stations to speak out,” says Emanuel. “Basically worrying about their image and the financial implications of these boycotts.”

And as a result, the effort died.

“The Reverse Freedom Rides basically fizzled out and became pretty unpopular,” she says.

The similarities are striking between what’s happening with the immigrants today and the so-called Reverse Freedom Riders.

“The fundamental idea of sending vulnerable people north to make a political point is almost identical. So are those false promises of housing and work,” Emanuel says. “This past week, it was Martha’s Vineyard where the Obama family goes. Back then, it was Hyannis where the Kennedy compound is.”

Shirley Jahad produced and edited this interview for broadcast with Gabe Bullard. Jahad also adapted it for the web.