Less than 70 years from now, the world’s population will reach about 11 billion. For comparison, that’s like adding New York City’s population to the world every month for the next 40 years.

It’s a scary fact to Vishaan Chakrabarti, founder of the New York-based Pau Studio, which is dedicated to "sustainable, equitable and joyous cities." He's also the author of "A Country of Cities: A Manifesto for an Urban America."

Chakrabarti has a plan for feeding and housing 3 billion more people without exacerbating climate change: In a 2021 TED Talk, he discussed the need for three-story housing.

“Our democracy's in trouble because I think there's just a lot of tension in the air about all of these converging crises,” Chakrabarti says.

The concerns center around both the building materials that can cause pollution and, once built, the energy the buildings will use. Sustainable materials like wood and brick would knock out the need for building towers. And solar panels can provide more environmentally friendly electricity.

Solar power won’t work if the building is too big or has too many occupants. If it’s too small, like with single-family homes, more people would lean into car dependency, creating more pollution. The plan needs to hit a “Goldilocks sweet spot,” Chakrabarti says.

Hitting that sweet spot also means using materials in the right place. Wood works for a number of places in the U.S., while humid climates like India would benefit from using brick. International building codes say three-story buildings also don’t require elevators, so long as there is wheelchair access for ground floor units, Chakrabarti adds. Eliminating elevators would further reduce the use of concrete and building costs.

“I just think we're at this moment where we have to rethink how we house our people, both existing populations and incoming population,” Chakrabarti says. “We need to think about that globally because we're at the precipice of a disaster here.”

In cities like Boston or New York, Chakrabarti admits it might not be appropriate to build three-story buildings. With mass transit available, there are reasons to build taller. However, in inner-ring suburbs, there are opportunities for three-story housing.

With the right kind of systems, Chakrabarti says three-story housing could also produce carbon-negative technology, meaning the buildings would create more energy than they use. Through three-story housing, 11 billion people could be housed in seven years in a landmass the size of France.

“We have enough land. We have the technology. We just need the vision,” Chakrabarti says. “I'm hopeful that someone will pick up the idea and run with it and will see if it really works. 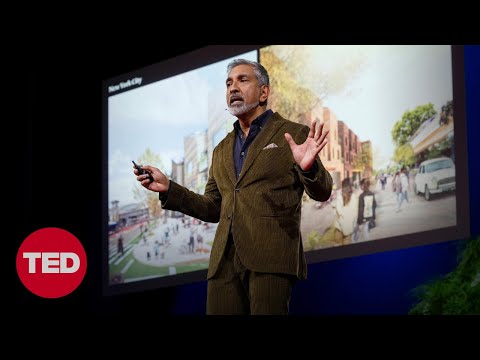 Karyn Miller-Medzon produced and edited this interview for broadcast with Gabe Bullard. Jeannette Muhammad adapted it for the web.