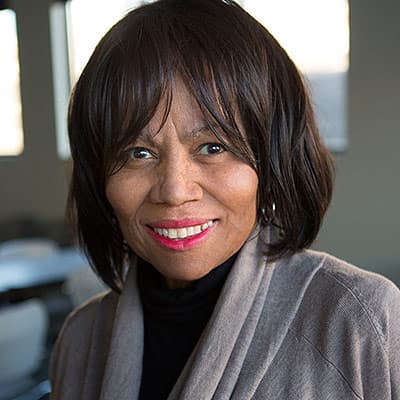 Delores Handy was formerly a host and reporter at WBUR.

Delores is a multiple Emmy Award-winning broadcast journalist. She worked at radio and television stations in her hometown of Little Rock, Arkansas, as well as in Memphis, Los Angeles and Washington, D.C., before moving to Boston in 1982 to work at Channel 7.

Since arriving in Boston, she has also worked at Channel 2 and Channel 68 as a producer, news anchor and host. In addition, she has been news anchor for the Monitor Channel and CNN Headline News.

Among her awards and honors are four Emmy Awards for her work in television in Washington and Boston; induction in the Silver Circle of the National Academy of Television Arts and Sciences for 25 years of excellence in television; a citation by the Museum of African-American History as one of the 350 people who epitomize the spirit of black presence in Massachusetts; Journalist of the Year by the Washington Press Club; a New York International Film Festivals Award for Documentaries; and many other awards from journalism and civic organizations for her work as a producer, writer, reporter and news anchor.