This presidential election, with its saturation television advertising — nearly all of it negative — will test a modern twist on an old-school approach to campaigning. It’s known variously as the ground game, field organizing, voter I.D. and get out the vote, canvassing, targeting and pulling your vote.

The Obama campaign, heavily invested in these activities, with some workers in states like Ohio having been in place like sleeper cells for four years, is counting on its ability to out-organize Romney forces to win certain swing states where polls show the contest is very tight. 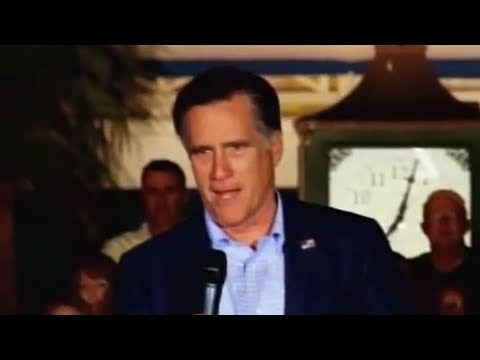 In a revealing piece in The New Yorker, Ryan Lizza got inside the Obama operation and learned that the campaign took a calculated risk, and for a while it paid off. The campaign spent 20 percent of its total campaign budget on heavy TV buys over the summer to define Romney as extreme and out-of-touch. The most memorable of the anti-Romney TV ads was one where he sang “America the Beautiful” as we saw his record of shipping jobs overseas and stashing millions in offshore tax shelters. I didn’t know whether to push the mute button or watch the train wreck.

Romney On The Ropes

The Obama campaign tried to define Romney through millions of dollars worth of TV ads — funds they now don’t have — that ran this summer. It almost worked. Coming out of the Clint Eastwood convention and after the 47 percent video, Romney was on the ropes, belittled by members of his own party and usually GOP-friendly columnists. That changed on Oct. 3, when Obama himself let Romney climb back into the ring in the first debate.

In that debate, Romney cynically shook the Etch-A-Sketch and morphed himself, yet again, into a moderate. Perhaps Obama couldn’t believe what he was hearing, but that night Romney became a plausible alternative to the president. The press, eager for a close race, quickly parroted the Romney campaign’s claim of excitement, bigger crowds and a fighting chance. (These same things happened when Mike Dukakis got crushed by George Bush, the elder.)

Throw The TV Out The Window

Romney and his superPACs have enjoyed a sizeable advantage over Obama and his allies in spending on TV ads. But the ads from the candidate, the GOP and its many PACs are so unrelentingly negative, voters don’t trust much of what they see on TV.

“People are going to throw their TVs as far as they can out of their window,” Jim Messina, a high-ranking Obama manager, said in The New Yorker story. Campaigns like Obama’s place a premium on finding their own voters or those they know, through other means, are likely to support him based on similar demographics; for example, college-educated women are highly predisposed to be Obama supporters.

Obama’s campaign has an extremely sophisticated and muscular ground game based on several elections and the expertise of the field staff and volunteers who have done this before. It is based on identifying Obama voters and getting them to the polls, rather than persuading voters to change their minds.

One academic study found that in 2008, Obama’s field offices and get-out-the-vote efforts were the deciding factor in his winning Florida, Indiana and North Carolina. All three are swing states this year, proving that in every election you start from scratch. But this year a ground game that yields one or two points could be decisive.

It’s a trade secret, but a knowledgeable friend in Ohio who is housing three Obama staffers says there are 800 paid Obama organizers in the state.

The Obama campaign even knows what works and what doesn’t. Robo-calls don’t, doing a “lit drop” — blanketing a neighborhood with handouts — is likewise a waste. What did work was face-to-face campaigning in a targeted neighborhood, and a mailer that told the voter whether his or her neighbors had voted previously (it’s public record) and appealed to the voter’s civic responsibility. It didn’t hurt that the voter might’ve thought in the next election, whether he or she voted would be shared with neighbors.

Will It Work This Time?

Here’s how The Atlantic’s Molly Ball put it:

Four years ago, Barack Obama built the largest grassroots organization in the history of American politics. After the election, he never stopped building, and the current operation, six years in the making, makes 2008 look like “amateur ball,” in the words of Obama’s national field director Jeremy Bird. Republicans insist they, too, have come a long way in the last four years. But despite the GOP’s spin to the contrary, there’s little reason to believe Mitt Romney commands anything comparable to Obama's ground operation.

Ball visited campaign headquarters unannounced in Ohio, Colorado and Virginia and in every case she saw that Obama’s operations were dedicated entirely to re-electing him, while Romney’s offices weren’t really Romney operations at all; they were Republican offices with divided responsibilities for Romney as well as Senate, congressional and local Republican candidates.

“The Romney campaign doesn’t do the ground game,” Rick Wiley, national Republican political director, explained. “They have essentially ceded that responsibility to the RNC. They understand this is our role.” Hmmm.

Getting Out The Vote Matters

It’s a fact that Republicans are better voters than Democrats. They’re better-educated, better-off financially, have jobs and daycare that allow them the time to vote, and are more apt to think their vote matters than someone who’s struggling economically or has a language barrier.

The Obama campaign has the organizational strength to manage early voting and placed a high priority on registering new voters, especially young people and minorities.

Romney is paying a dear price for alienating Hispanic voters with ill-considered talk on immigration. In the key swing state of Florida, Latinos are 13.5 percent of registered voters; a little less than one half of them are Republican (Cuban) and a little more than one half are Democratic (mostly Puerto Rican). Colorado is 21 percent Hispanic. In Virginia, Hispanics now make up 8.2 percent of the state, while African-Americans are 9.8 percent. Latino voters could give Obama wins in key states.

The Elizabeth Warren campaign has a preference for field organizing over communicating. This explains the campaign’s willingness to alienate the news media in order to control the candidate and the message. But the blueness of the state, the smallness of the GOP, and the largeness of Obama’s victory could offset her mediocre campaign and produce a win on Tuesday.

This program aired on November 5, 2012. The audio for this program is not available.