It's that wonderful time of year in Boston. We've just marked the "unofficial" start of summer, and green has burst back into the color palette.

In all the warm-weather excitement, a persistent thought might also re-enter your brain: "I want to start biking."

Take commuters: Though the overall share of people who bike to work remains quite small, the city says the number of Bostonians who usually commute via bike increased 180% from 2007 to 2016. And you might have that one friend who gets around by bike and constantly sings its praises: speed, convenience, independence, affordability, health and environmental benefits and on and on.

You want in. But it all feels overwhelming — and perhaps too dangerous.

Here are a few things to know before ditching your car, public transit or your own two feet for a pair of wheels.

No. 1: You Have Bike-Share Options

Maybe you want to dip your toe in two-wheel waters before diving in headfirst with a bike of your own. Fear not, you have options.

Among the most accessible? Bike-share.

The most well-established offering is Bluebikes (formerly known as Hubway), which covers Boston, Brookline, Cambridge, Somerville and, pretty soon, Everett. Bluebikes docks are common on many a street corner, and you might even spot one hidden in plain sight near where you live or work. Here's the full system map.

Prices range from $2.50 for a single-trip pass, to $10 for a 24-hour "adventure pass." For unlimited rides, there are monthly memberships, and a $99 annual membership. There's also an income-eligible program.

You'd want to download the Bluebikes app to help streamline the process before finding a dock. From there, pay the fee or use your pass, unlock your bike, and away you go. Simply return the bike at the dock nearest your destination.

In addition to Bluebikes there are "dockless" options — bikes you can pick up and drop off anywhere, as long as it's within their respective systems — like Lime and Cambridge-born Ant Bicycle. Each has its own app you'd need to download in order to locate and unlock a bike.

Bike-share is a low-stakes way to figure out if biking is right for you. But that doesn't mean you should scrimp on safety. It's a good idea to always wear a helmet (kids 16 and under must wear one, per state law), and follow the standard best practices and safety precautions.

And fair warning: You might find these shared bikes a bit ho-hum when it comes to speed, especially compared with a bike of your own.

No. 2: There Are Great Places To Ride — And Trouble Spots

The city of Boston touts its efforts to boost biking and slash crash numbers — but also admits "many people don't feel comfortable riding a bike on our streets." Bike infrastructure in and around Boston is improving, but some bike advocates say progress is happening at a "glacial" pace.

"There are some really great off-road paths ... and there are some — and we know that there are going to soon be more — protected bike lanes on the streets," says Eliza Parad, director of organizing for the Boston Cyclists Union. "But that is still a small number. There are a lot of missing connections."

A scorecard compiled by PeopleForBikes, a national bike advocacy organization, gives Boston a 2.7 out of 5, with particularly low ratings on two metrics: "network" (how well the bike network connects people to destinations) and "reach" (how well the network serves everyone equally).

And Noah De Amor, founder of the Bowdoin Bike School in Dorchester, says biking in Boston is slanted toward the privileged.

"In order to feel safe [biking] in Boston ... right now, you have to be very fit and very fearless," De Amor says. "I think that the way that the streets are set up just reeks of privileged culture. It just kind of sends a message that only certain people should be cycling on the streets."

The number of people biking in the area is growing, but it's still relatively small: Just 2.1% of people report bicycling as their primary means of transportation to work in Boston, according to census data.

If you want to start off riding more leisurely at somewhere more protected, here is a list of some parks and public spaces to check out:

Know Where To Be Cautious

While these paths and trails are great for biking, riding on city streets requires a higher level of awareness.

Boston's Vision Zero initiative aims to end serious and fatal bicycle crashes by 2030. This Vision Zero map offers a look at where and when bike crashes have occurred, and here are a few specific areas of caution to keep in the back of your mind before hitting the streets:

"If you don't feel safe on the road, ride on the sidewalk," Parad says, adding it's best to find an alternate route and avoid traffic-laden areas altogether when possible.

Organizations like the Boston Cyclists Union and Bowdoin Bike School also host group rides for people who would rather have some experienced company while acclimatizing to city biking.

There can also be comfort in a routine, says Mark Vautour, store manager for Landry's Bicycles on Commonwealth Avenue by Boston University. If you plan to ride to and from work, for example, do a little preliminary research and get to know the ins and outs of that particular route.

For many people, riding a bike means flexibility and independence. But there are rules of the road, and you'll want to at least know your rights before mounting up.

Motorists, for instance, must check for passing cyclists before opening their door, maintain a safe distance when passing on the left, yield when making left turns, and are prohibited from making abrupt right turns, according to state law. 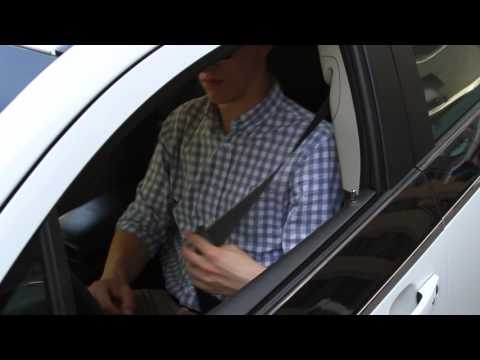 Here are the laws you must follow as a biker in Boston proper:

There are also do's and don'ts when it comes to bringing your bike on the T. Here are all the MBTA's rules.

If worst comes to worst and you get into a crash, this list from the bicycle advocacy organization MassBike lays out what you can do and factors to keep in mind.

No. 4: You'll Want To Be Prepared For The Elements — And Sweaty Clothes

Greater Boston's weather is anything but predictable, and that poses challenges for bikers: You might depart for your destination under partly cloudy skies, only to deal with a downpour when it's time to head back. That creates problems from slick roads to reduced visibility to braking ability.

In short, it's best to be prepared — and doing so doesn't require a bunch of fancy gear.

"Certainly you can use things a lot of times that you can just find in your home," Parad says. "You don't need special hats or special bike seat covers. You can use plastic bags to cover your seat."

It's also a good idea to have layers at the ready.

"And bringing extra pairs of socks," Parad says. "So if you do get stuck in the rain ... keeping your feet dry and bringing a change is a good tip."

The sweat factor is another one worth keeping in mind, especially as we enter the sticky summer months. Vautour says one tip to avoid getting drenched is to pace yourself to and from your destination. You could also toss an extra shirt in your bag and/or plan to towel off upon arrival.

"When I ride my bike to get somewhere, I just go as leisurely [as possible] and I enjoy the city," Vautour says.

Bonus: What's One Thing You Wish You Knew Before You Started Riding?

Just how much fun it would be. I grew up in the suburbs. When I moved to the city, I started riding my bike to go places, and it's just plain fun.

When we first opened the bike shop in Boston, I didn't know anything. Like I knew literally nothing ... but we'd go on these great bike rides after work, we'd close up the shop and we'd go ride somewhere — whether it was to go get a burrito or ride to the top of the Arboretum at night and see the city. I wish I knew how many places you could see on a bike, and just the pure joy of riding a bike. I swear to God, it keeps you from growing up.

Eliza Parad, director of organizing for the Boston Cyclists Union:

When there are painted lanes on the ground, really the safe place to ride in a painted lane so that you don't get doored is close to the outside line. When I started riding, I used to ride right next to the [parked] cars — and luckily I haven't gotten doored. But I learned that many years later.

Like most people, when I started riding, I didn't know how to maintain my bicycle. Bicycling definitely afforded me a level of personal freedom of mobility that walking and taking the T did not ... but one limiting factor was if anything ever went wrong with my bicycle, I would have to pay somebody to fix it. Either that, or I would have to find somebody with the skill set who was willing to do it for free.

I was in a bad crash a couple years ago, and that really changed my whole outlook. I think the biggest takeaway from that is that I just don't trust drivers anymore, whereas before I just blindly ... gave them the benefit of the doubt, that if I'm in the right and I'm following the rules of the road, that I can count on every single driver to watch out for me. And one day, one driver didn't respect that and hit me, and changed my life.