The Worcester Housing Authority has received approval and funding from the Massachusetts Department of Housing and Community Development to build the first-in-the-state modular building of micro-units to house people who've been chronically homeless.

The property will feature 25 studio apartments with kitchenettes and bathrooms — 24 for people who've been chronically homeless and one unit for a residential manager.

A case manager will work out of an on-site office to help residents manage their finances and stay connected with services, including mental health and addiction treatment, according to Worcester Housing Authority Executive Director Alex Corrales.

The state awarded $2.2 million toward the project that is estimated to cost $3 million, Corrales said. The remaining cost will be covered by city dollars, funding from the Massachusetts Housing and Shelter Alliance (MHSA)'s Home & Healthy for Good program, and debt to be taken on by the housing authority.

"It's one of those things that if done correctly, could really become a perfect example for other communities when addressing [the needs of the] chronically homeless," Corrales said. "Get them off the street and get the services they need, and at the same time do it at a very affordable cost." 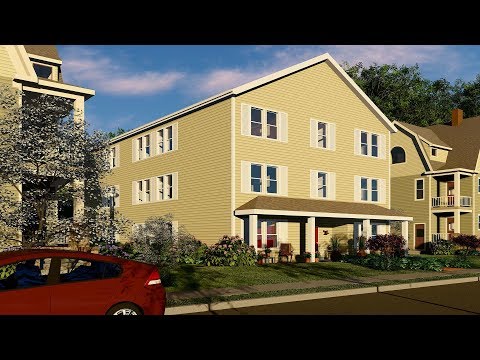 The three-story building will go up on a 33,000 square-foot parcel at 38 Lewis Street in Worcester, which the housing authority already owns. Each studio unit will be approximately 300 to 400 square feet.

MHSA has been encouraging communities and homeless service providers to consider modular micro-units as a low-cost and fast way to provide permanent apartments with support services for people who've been chronically homeless. The organization worked with Margulies Perruzzi Architects to come up with the design concept. (The company is a WBUR underwriter). Worcester Housing Authority chose Boston-based ICON Architecture for the project, Corrales said.

Joe Finn, president and executive director of MHSA, said the Worcester development will serve as a prototype to help the organization determine whether it's an effective model for other communities. Finn pointed out that it's "low-barrier" housing.

"It's not a compliance-based housing system where there are rules that can dictate whether or not [residents] can remain in that housing," he explained. "All that matters is their successful tenancy."

For example, Finn said, if someone has serious mental illness, "they're not required to stay on their medication to maintain their housing. Likewise, a person who has substance use disorder, if they use, can't be picked up and put out of the housing."

Corrales said Worcester Housing Authority is working "at lightning speed," in hopes of having the building constructed by early next year. The goal is to move people into the apartments when the coronavirus is still a threat — particularly in homeless shelters.