That's an officer's quote pulled from Boston police body cam footage from May 31 — when a massive, peaceful demonstration in response to the police killing of George Floyd devolved into chaos. After the official march ended, clashes broke out between police and protesters, and some people damaged and stole from various stores along city streets.

The Suffolk County district attorney's office released more than 60 hours of body cam footage to lawyers for four protesters facing criminal charges: three with disorderly conduct, and the fourth with assault and battery with a dangerous weapon — a water bottle.

The lawyers shared the footage with WBUR. Portions of the videos were first published on the online news site The Appeal.

WBUR reviewed one of the videos for this story, recorded over an hour and 23 minutes by a single unidentified officer. The video shows a first-person perspective of the officer, who is on a bicycle and often with several other police on bicycles. The officer is seen navigating an evening that, the video shows, often turns tense — even violent at times — with police dodging projectiles and getting screamed at by protesters. 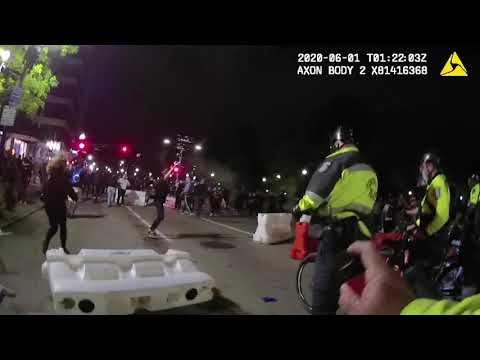 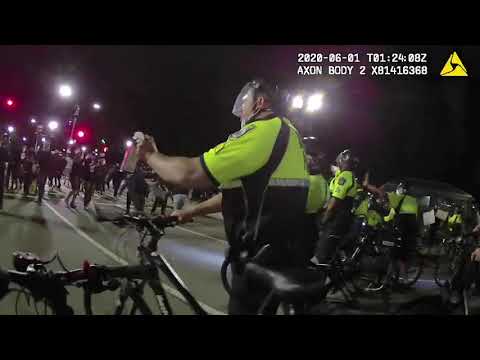 "Move back!" a group of officers chants in unison at several protesters, the video shows. "Spray them!" replies one of the officers. 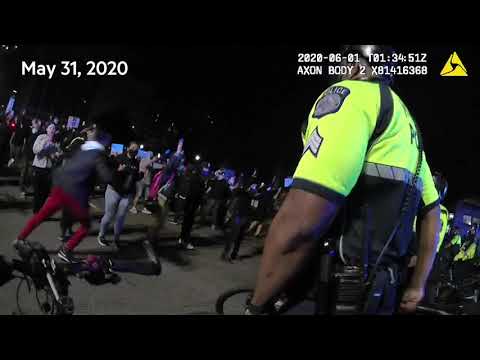 It’s not all confrontation. The officer stops at one point to help an injured protester — and at another, explains to an elderly man why police are taking an aggressive stance.

"When they start throwing stuff, our job is to clear the crowd, for the safety of everybody," the officer wearing the body cam says.

"It just seems so aggressive," the unidentified man says.

"It's not pretty," the officer replies.

Some city councilors say the body cam footage reinforces their earlier calls to place new restrictions on the use of weapons like tear gas and rubber bullets. Last week, the Boston City Council passed an ordinance to regulate how these weapons are used to control crowds.

The ordinance would force police to give warnings before using either tear gas or rubber bullets, announce what weapons they plan to deploy, and give people a chance to disperse.

Police also would have to warn protesters that officers plan to use pepper spray, wait two minutes, and repeat the warning. That would then give protesters another two minutes to disperse before weapons could be discharged.

The rules would only apply to situations involving 10 or more people. Violations would be subject to a minimum of a five-day suspension, and a maximum of discharge from the department.

"If they find ... that they need this after they've tried all forms of de-escalation — which is what they say they already they do in their manual — this requires them to give a warning to say, 'We are going to use this specific weapon,' ... and then it gives people two minutes to leave," Arroyo said.

The pepper spray and riot gear ordinance comes as the mayor has indicated he supports a separate initiative to create a watchdog office to review police activity — an office advocates say could review body cam footage from the May 31 protests. A spokesperson for the mayor says Walsh has concerns the proposed council rules could lead to police using more lethal weapons.

A Boston police spokesperson pointed WBUR to a statement from Commissioner William Gross to the city council. Gross says the ordinance sets an "impossibly high burden" to doing police work in real time, making it “ill-suited to restore peace during episodes of crowd violence."

Councilor Andrea Campbell wrote the ordinance with Arroyo. Campbell — who's running for mayor — says the city needs a law to govern the use of crowd control weapons.

"The department says they have policies in place to restrict the use of these weapons.  That wasn't necessarily clear to us. So we said, 'If you do, we want to codify that,'" Campbell said. "So it's part of the public record. And so folks know exactly what that policy is."

Walsh is expected to make a decision on the pepper spray ordinance in the days ahead. The measure passed the Council 8-5, meaning if the mayor vetoes it, proponents will have to convince one of five councilors who voted against it to change his or her mind.

This article was originally published on December 24, 2020.