This is an exclusive music video premiere, part of WBUR's effort to highlight New England musicians. 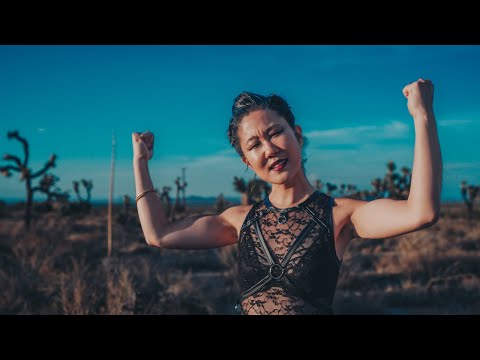 Grace Kelly says she did not write her new song, “We Will Rise,” with anthemic intent. Nor was it written as a reaction to the Supreme Court decision striking down Roe v. Wade. That divisive ruling curtailing abortion rights hadn’t yet come down when the Brookline native penned the tune this past April, finishing the music video this week. The song has a Katy Perry “Roar”-like female empowerment vibe and, though one never knows, could become an anthem.

“Initially, I was inspired after reading one of my favorite poems by Maya Angelou ‘And Still I Rise,’” Kelly says, on the phone from Los Angeles where she now lives. “Her voice and her presentation of her work is so moving to me, especially as someone who went through all the hardships she went through in her life. Her work really speaks with such beauty and grace and not bitterness.”

“We Will Rise” is being released Sept. 9 in advance of Kelly’s 14th album, “All That I Need,” available to stream on all platforms Nov. 18. She says the Supreme Court's decision to overturn Roe v. Wade drove her to push the single out early.

“My hope with the song is that it wakes up the female warrior inside,” Kelly says. “For the women out there fighting for our rights to make decisions about our own bodies, for our independence. There are so many things that came to the forefront, so many feelings I had with this disturbing news and I realized it's so important, I needed to get this song out now. Everyone should make decisions about their own bodies.”

For those who are more familiar with Kelly’s role as a jazz saxophonist — it’s how she emerged in Boston during the early 2000s — a powerful, rousing pop song may come as a bit of a surprise.

But singing is not a new thing for Kelly — she’s been writing lyrics, singing and shifting genres for some time now, winning Song of The Year in 2019’s John Lennon Songwriting competition for “Feels Like Home.”

Kelly, now 30, came to early acclaim and a measure of fame as a young teen mentored by the late Fred Taylor, the longtime jazz impresario, tastemaker and booker at Scullers Jazz Club. Over the years, Kelly met, was befriended by and jammed with three — now deceased — alto sax greats who also became mentors: Phil Woods, Lee Konitz and Frank Morgan. Kelly has carried on the tradition, teaching students both online and in-person, including a guest teaching residency at Berklee College of Music.

Over the years, Kelly built her audience and garnered critical support. In 2016, she joined her longtime friend, keyboardist Jon Batiste — he calls her “an electric talent” — as a side-person with Stay Human, his house band on “The Late Show with Stephen Colbert.” She’d known Batiste for 10 years by then and had played with him at the Blue Note Jazz Festival and at the Newport Jazz Festival. She got the text from Batiste on a Friday and joined the band on Monday for a three-week stint that turned into six months.

“I had the time of my life,” Kelly says. “But I was also doing a lot of touring with my own band and my main dream and goal has been to be a band leader. Ultimately, I was riding that wave at that point and that wave took over.” Her band includes keyboardist Devon Yesberger on keys, bassist James Dale and drummer Ross Pederson.

Kelly’s story has a certain element of “charmed life” about it. Novelist Michael Connelly, writer of the best-selling Harry Bosch detective novels and creator/executive producer of the “Bosch” and “Bosch: Legacy” TV shows, wrote Kelly into his novels several times and she performed on the show. That’s because Bosch was a huge Frank Morgan fan and Morgan, in real life, was someone so close to Kelly he called her his “granddaughter” and she called him “Grandpa Frank.”

“It’s amazing to have so many connections and things that have happened in my career that I never would have imagined,” Kelly says. “A lot of people have found me and come to my shows because they were watching ‘Bosch.’”

Kelly is now by no means strictly a jazz artist — she’s covered The Beatles “Come Together,” Michael Jackson’s “Billie Jean” and Van Morrison “Crazy Love,” to name a few.

“I think it would be very stagnant to just stay in one place,” says Kelly. “I’ve made some records I’m very proud of with my great mentors in the jazz world, but the main thing I focus on is how do I keep pushing my artistry forward.”

As a songwriter, Kelly describes it as a process, with lyrics being more difficult than music. “I’m continuing to find my voice and writing has been a great way to connect with that part of me,” she says. “I think music is easier for me. For the song ‘All That I Need,’ I remember the ideas were flowing like crazy — like stream-of-consciousness or journaling — but I was feeling so stuck, I had [to] quiet my mind through meditation.”

In the song, Kelly goes after “critics [who] spoke so freely about what I shouldn’t say.” She says this is a reflection from her older self, looking back on certain slings and arrows tossed her way as a youth.

The criticism, she adds, came from “certain jazz writers who wrote discouraging things about my singing and some personal remarks from people in the industry who told me I wasn’t a singer or songwriter and should just stick to playing sax.”

Kelly’s evolution, she says, comes from wanting to explore different musical landscapes. “For me, the main drive has always been the song. What is gonna serve the song the most? I don’t want to put the song into a certain genre because I feel like I need to be labeled or called a jazz artist. To me, it’s music. With this record, the music took me to a lot of different places and I feel like all those different genres, those different grooves and beats are all part of me and the music that I love.

Grace Kelly’s upcoming “Good to See You Again” tour kicks off Aug. 19 at Worcester's Jazz at Sunset. She plays Boston’s City Winery Aug. 25. For a full list of shows visit her website.