When the band QWANQWA takes the stage of the BU Global Music Festival on Saturday, Sept. 17, it’ll be making its Boston debut — as are five of the other groups playing the free event. But if the violinist looks familiar, it’s because Kaethe Hostetter was a busy Boston musician before a trip to Addis Ababa changed her life.

Hostetter moved to Boston when she was 17. Eschewing full-time enrollment at one of the local music schools — “I wasn’t looking to go deeply into debt” — she quickly began freelancing as a violinist and violist with groups that ranged from the Boston Philharmonic to the big top ensemble Cirkestra. Playing with the informal street band Stick & Rag Village Orchestra and volunteering at Bikes Not Bombs put her in the same Jamaica Plain scene as Danny Mekonnen, an Ethiopian American saxophonist and ethnomusicologist who was starting a large Ethio-funk outfit called Debo Band

The first time Mekonnen played Hostetter a classic Ethiopian recording, she knew her life had been changed. “I didn’t really understand why it impacted me so much at the time, but what I now realize was touching me so much were the scales and the melodies and how there’s a real immediate groove behind the virtuosic playing,” she says.

Debo quickly became an in-demand Boston band. Soon it was recording for Sub Pop Records and touring internationally. In 2009, it was selected to be part of the Ethiopian Music Festival in Addis Ababa. Like many Western musicians and listeners, Hostetter was most familiar with the 1960s and '70s Ethio-jazz and funk of artists like Mulatu Astatke and Mahmoud Ahmed which had been collected on the long-running Ethiopiques compilation series. But on the first night of the trip, the members of Debo went to one of the houses of traditional music known as azmari bet, giving Hostetter her first chance to hear the masinko, a one-string fiddle. “That was even more of a ‘wow’ moment,” she says. When the rest of the band went back to Boston, Hostetter stayed. 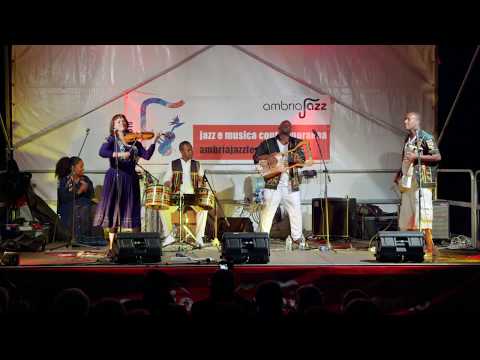 “It wasn’t really well-planned out,” she laughs. “I’d be in Addis Ababa for a while until my money would run out, then I’d go back to the US, make more money, and come back until the money ran out again.” Eventually, she was living in Ethiopia full time, where she started a children’s string instrument school, and began the research into Ethiopian textiles that led to a clothing line called WUZZAWAZEE.

Hostetter wasn’t just a white American playing East African music, but one of the few female instrumentalists in the vibrant Addis Ababa traditional music scene. “There was a lot of otherness there,” she acknowledges. “But everyone was super friendly and I was always made to feel welcome.”

“I was so happy to see Americans who wanted to play Ethiopian music,” says Misale Legesse, who plays the kebero goat skin drum in QWANQWA, which plays traditional Ethiopian melodies and rhythms through a psychedelic lens. “Now we’re like sister and brother.”

Legesse had also been a member of a more traditional music and dance ensemble, Fendika, which toured the U.S. with Debo Band in 2011. “Fendika had been more like true azmari music. With QWANQWA, we take that music and fuse it and experiment with it,” explains Legesse.

“Our songs are traditional melodies that might just be a chant of a few words,” adds Hostetter. “So there’s always a source, and then we add all of the beats and the harmonies and shape the music.” 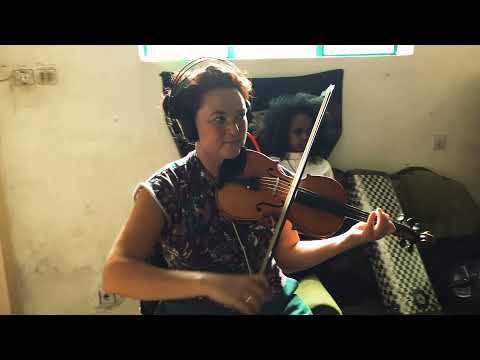 That bridging of tradition and innovation is something QWANQWA has in common with many of the other acts who will be performing and leading workshops during Saturday’s festival. Other groups making their Boston debut include Mexican marimba punks Son Rompe Pera, Estonian electro-folkies Puuluup, and Malawian instrument creators and street duo Madalitso.

QWANQWA, which means “language” in Amharic, started as an instrumental quartet. Its first release, “Volume 1,” was in 2014. Today, it is a quintet that also includes bass krar (lyre) player Anteneh Teklemariam, masinko player Endres Hassen, and vocalist Selamnesh Zemene. “Having the violin and the masinko means we can really converse and dance around each other with the strings,” says Hostetter.

Musicians have always ignored borders, and QWANQWA is no exception. Besides including pieces from different Ethiopian ethnic groups, the band’s most recent release, “Volume 3,” opens with a song based on an Eritrean melody of the Blen tribe before moving onto a wah-wah drenched song the group learned from the Somalian disco pioneers Dur Dur Band. A new stringed instrument created by Hassen led to a song inspired by Malian music. Zemene is a master of the lyrical tradition known as sen-ena-werq (gold and wax), where words contain multiple meanings.

Shortly before the COVID-19 shutdown, Hostetter returned to her native Santa Cruz to help plan for what was originally slated to be 2020 QWANQWA tour, funded in part by a MacArthur Foundation grant. Between COVID and the ongoing political turmoil and humanitarian crisis in Ethiopia, she hasn’t moved back. Even though the QWANQWA tour is finally happening, Hostetter says she’ll likely stay in the US. “I think my new relationship [with the music] will be through collaborating outside of Ethiopia. We can benefit more by exporting the groundwork that we built there.”