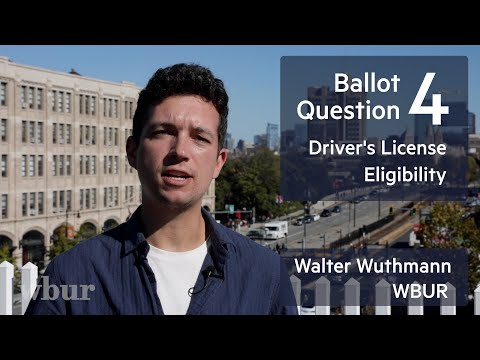 This fall, Question 4 on the statewide ballot asks voters if they want to keep or overturn a new Massachusetts law that allows unauthorized immigrants to obtain driver's licenses.

Democratic lawmakers this year overcame a veto by Republican Gov. Charlie Baker to pass the "Work and Family Mobility Act," making Massachusetts the 17th state in which people without legal status in the U.S. can apply for licenses.

Soon after, a group with hopes to repeal the law, called Fair and Secure Massachusetts, successfully gathered enough signatures to put the statute on the ballot. Here's what you should know about Question 4.

What do supporters say about the current law?

Caught in the middle of the debate are people like Zoila Lopez.

Lopez was not living in the country legally until she recently received a special visa for victims working with law enforcement. She came to the United States from Guatemala in 1989, when she was 19. For years, she worked in hotels and restaurants, taking public transit and catching rides where she could. She said it was a struggle to take her children to extracurricular activities and medical appointments.

What your vote means, as written by the secretary of state's office

"A 'yes' vote would keep in place the law, which would allow Massachusetts residents who cannot provide proof of lawful presence in the United States to obtain a driver’s license or permit if they meet the other requirements for doing so."

“I’ve been there, I know how it felt,” she said during a recent interview in her Waltham home.

Lopez said the lack of a driver’s license also made her scared to interact with law enforcement, because she had limited means of identifying herself without risking deportation. She said that fear kept her from going to police as her relationship with her now ex-partner grew abusive.

“I was trying to go away,” she said. “But I didn’t know how to put myself safe.”

Lopez said one night her partner came home and struck her in the head, knocking her unconscious. When she came to, she called 911.

The police arrested her partner. Lopez went to court and was able to secure a U visa – a special visa for victims of crime. She also finally received a driver’s license and no longer must fear encounters with police officers.

“I feel thankful,” she said. “I have something in my hand that I can give to them and tell them, ‘This is me, and I am allowed to be on the street.’ ”

Law enforcement groups like the Massachusetts Major City Chiefs of Police and a coalition of sheriffs and district attorneys support the law allowing undocumented immigrants to get driver’s licenses.

Gundersen said she thinks the roads are safer when immigrants are not afraid to be pulled over. She points to data that show hit-and-run crashes fell in California and Connecticut after lawmakers passed similar laws.

Why do people want to repeal the law?

Opponents, however, contend the law rewards migrants who broke the law.

Maloney and her organization, Fair and Secure Massachusetts, gathered nearly 72,000 approved signatures to get Question 4 on the November ballot. She said she's motivated by personal experience: Her son, Matthew Denice, was killed in 2011 by a drunk driver who was not here legally.

Secretary of State Bill Galvin, the state’s top elections official, disagrees. Galvin says there are safeguards to prevent people with the types of visas that allow them to drive from registering to vote, and his office is confident that system could be expanded.

What could happen next?

If most people vote "no" on Question 4, the law would be overturned. But if a majority vote "yes," the law will stand. The Massachusetts Registry of Motor Vehicles could receive thousands of new applications for driver's licenses after the law goes into effect July 1, 2023.

The Pew Research Center estimates there are about 250,000 undocumented immigrants in Massachusetts.

Lopez, who lives in Waltham, said she has family, friends and neighbors who can’t wait to apply.

“It’s many, many people,” she said. “They wish and pray to have, at least, a driver's license.”

WBUR's Radio Boston, hosted a debate on Question 4 on Oct. 7. The conversation, sponsored by WBUR, The Boston Globe and WCVB, can be seen below. 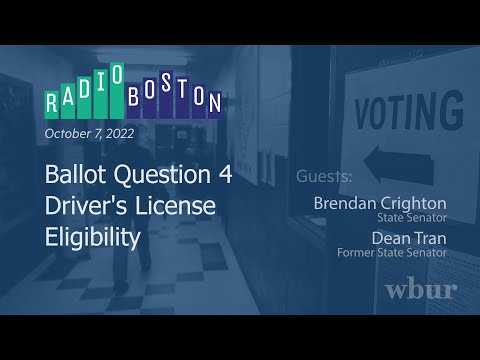