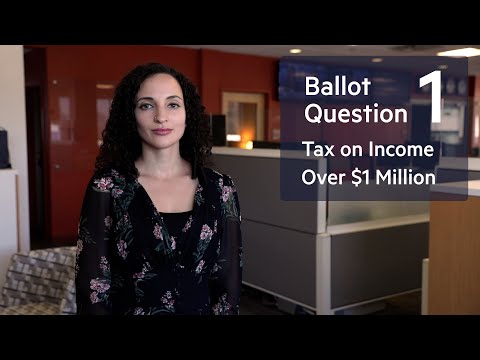 This election season voters will decide if the top income earners in Massachusetts residents should pay more in state taxes.

Massachusetts is one of 10 states with a flat tax system. All taxpayers pay a 5% state tax rate, regardless of their income. Question 1 proposes changing the state's constitution to add a 4% surtax on any income that exceeds $1 million.

Roughly 0.6% of Massachusetts households — or about 21,000 filers — made more than $1 million in 2019, according to the nonpartisan Center for State Policy Analysis at Tufts University.

What would your vote mean?

At its core, Question 1 asks voters: What do you believe is a fair tax system?

A "yes" vote would change the state's constitution to create a tiered, progressive tax system, similar to those used by the federal government and most states.

The surtax only affects personal income taxes and would not change corporate tax rates. Personal income includes profits from the sale of real estate or businesses. Homeowners could deduct from their taxes the original price of the sold property — along with the cost of renovations — from the total profit.

Some estimates suggest  the added tax revenue would yield between $1.3 billion to $2 billion in its first year.

A "no" vote would maintain the state's 5% flat tax rate.

Supporters refer to Question 1 as the "Fair Share Amendment." The main force behind it is a coalition called Raise Up Massachusetts that's made up of labor, community and religious organizations.

The coalition argues a flat tax is fundamentally unfair in a state with a high wealth gap. According to the Economic Policy Institute, Massachusetts has the sixth highest income gap of any state.

What your vote means, as written by the secretary of state's office

"A 'yes' vote would amend the state Constitution to impose an additional 4% tax on that portion of incomes over one million dollars to be used, subject to appropriation by the state Legislature, on education and transportation."

"A 'no' vote would make no change in the state Constitution relative to income tax."

"The Massachusetts economy is working great for the super rich, but that prosperity isn't reaching all of us as we come out of the pandemic," said Shanique Spalding, one of the coalition's community directors. "We need to make sure our tax system is fair in order to grow our economy and make it work for everyone."

As written, the amendment dedicates the funds "for public education" and "public transportation." However, as with all tax revenue, exactly how the money is spent will be up to lawmakers.

Top donors for the group's TV ads include the largest state and national teacher's unions; the union umbrella organization, AFL-CIO, as well as Sixteen Thirty Fund, a nonprofit and contributor to several progressive and Democratic causes.

Karsen Eckweiler, co-owner of Democracy Brewing in downtown Boston, appeared in a pro-tax TV ad to argue that a permanent revenue stream to support public transportation would be good for her business. Most of her colleagues use the MBTA to get to work.

"That's something that's going to very much so impact our staff and make everything easier for us to retain employees, so they're not spending two hours commuting because the trains are delayed or there's road closures," Eckweiler said. "I think that it's a very small ask for a very big impact."

Opponents of the measure, like the Coalition to Stop The Tax Hike Amendment, think a constitutional amendment to change the state's tax rate is hardly a small ask. The coalition includes several big businesses and trades organizations.

Eileen McAnneny, a group member and president of the nonprofit Massachusetts Taxpayers Foundation, said she believes a new tax will push high earners out of Massachusetts. She adds that remote work has never been easier than it is now.

"No one foresaw a pandemic or the fundamental changes in how we work and live," McAnneny said. "If you have a constitutional amendment with the tax rate in the constitution, you're stuck with it for a while. So I think it's a very inflexible policy that could be harmful."

A TV ad created by the "no" campaign features Leo Cakounes, a Cranberry farmer in Cape Cod. Although his farm doesn't profit anything close to $1 million, he works with large distributors. He worries if additional taxes encourage big businesses to skip town, farmers will have fewer options to transport their products.

"It's going to affect us in jobs," Cakounes said. "It’s also going to affect small companies, like myself, to be able to compete and sell our products with a larger firm."

Cakounes, like many farmers, used most of his money to buy land over the years. He plans to sell off pieces of it as he approaches retirement. In his view, adding new taxes to those sales feels like a penalty "for having done the right thing."

"For having worked very hard, conserved, saved so I could have land, so when I turn 65 years old, I could start selling sections of it off," Cakounes said.

Suffolk Construction, a big Boston-area contractor, and Rand-Whitney, a packaging company under Patriots Owner Robert Kraft, were among the ad's top contributors.

The campaigns are duking it out as the Baker administration gets ready   to return almost $3 billion in taxes to residents before the winter holidays. An obscure law demands  the state do this if it hits a certain revenue cap; the law hasn't been triggered since 1987.

Opponents argue this shows the state does not need more tax money. But supporters say the move is highly unusual and does not undermine the need for a permanent revenue stream dedicated to public services.

Voters can request to cast their ballot by mail, head to the polls during designated hours in the two weeks of early voting between Saturday, Oct. 22 and Friday, Nov. 4, or vote on Election Day, on Tuesday, Nov. 8.

WBUR's Radio Boston, hosted a debate on Question 1 on Oct. 14. The conversation, sponsored by WBUR, The Boston Globe and WCVB, can be seen below. 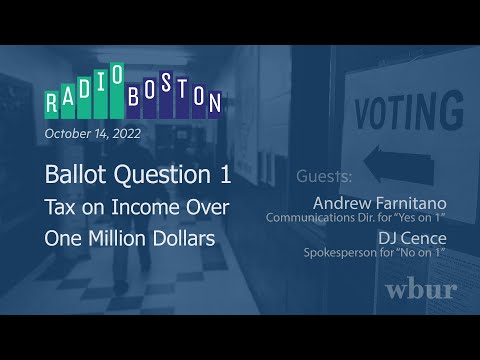 This article was originally published on October 13, 2022.