What are the ingredients to a good song? Like a homemade tomato sauce, best not to overcomplicate it. A simple chord progression; a singable melody; a touch of dissonance, but not too much. A bridge that isn’t trying too hard. A refrain that deepens the longer you listen.

Lee Zangari’s “A Man Is A Man” renders these components with exquisite simplicity. Both verse and chorus unfold over the same descending motif, plucked unhurriedly on a mountain dulcimer. The melody twists pleasingly over this spare, cyclical arrangement. The refrain – “A man is a man is man says he/ As far as I can see/ Nobody likes to be/ A man is a man is a man says he” – gestures to the culture wars and society’s evolving concept of gender. But the verses take a fanciful turn. “I could be a pigeon, I could be a snake/ I could be the winter, or I could be a lake,” Zangari sings, and you sense that this isn’t some sarcastic rejoinder to the proliferation of gender-neutral pronouns, but a sincere act of imagination: what would it mean to be other than you are?

Zangari performed "A Man Is A Man" for their entry to NPR's 2022 Tiny Desk Contest. Though it didn't take home the ultimate prize — that honor went to Boston's Alisa Amador — it did win the hearts, and ears, of WBUR's own panelists (Billy Dean Thomas, Charley Rudell, Christian Burno, Erin Chase and myself), who were tasked with selecting a local favorite from among the nearly 150 Tiny Desk Contest entries from Massachusetts.

You heard it here first: Lee Zangari's "A Man Is A Man" is WBUR’s Favorite Massachusetts Entry to NPR’s Tiny Desk Contest. One of the panelists called the song “patient,” and I can’t think of a better description. It enters quietly, but stays with you. 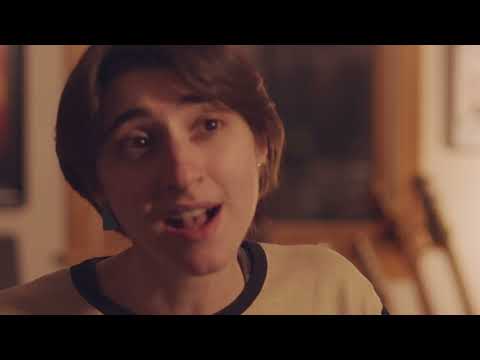 On a visit to Zangari’s home in Quincy, I had two questions on my mind: one, what was the inspiration for “A Man Is A Man”? And two, how did a 28-year-old from the South Shore end up playing the mountain dulcimer, an Appalachian folk instrument whose popularity peaked sometime in the 1960s?

Zangari first confirmed that, yes, gender was on their mind when they wrote “A Man Is A Man.” But they wanted to tell a more expansive story. “I think that trans experiences, when they’re abstracted or turned into metaphor, are often very appealing to broad audiences,” Zangari explained. “Feelings that are associated with transness are not foreign to anybody.” Anyone can feel like they’re different; anyone can change.

As for the mountain dulcimer? It helps to start the story in childhood. Zangari grew up in a musical household in Hingham: their dad, Joe Micarelli, is a jazz pianist and music teacher. Zangari started singing at an early age, occasionally joining Micarelli onstage during his regular jazz brunch gig.

“I was a big nerd for chorus,” Zangari said. “I did all the musical theater.” They later focused on theater at Hampshire College, a liberal arts college in western Massachusetts where students design their own majors.

Part way through college, Zangari broke up with their partner, who played guitar and had been Zangari’s main musical collaborator. To cheer them up, their parents gave them a mountain dulcimer, with the thought that Zangari might at last learn to play an instrument. That way, they wouldn't need anyone else in order to make music — they could do it on their own.

There was a certain logic to the choice. The mountain dulcimer, which is not to be confused with the larger, more technical hammered dulcimer, is a beginner-friendly instrument. It typically has four strings, two of which are tuned to the same note, and is played on the performer’s lap. The frets are arranged in a diatonic scale, so it’s easy for a novice to pick out a melody.

Seated in the dining room where they practice and write songs, Zangari spoke carefully, often pausing for long moments in search of the right words. Their songs have a similar cadence: measured, quiet, and unafraid of negative space. Since mastering the dulcimer Zangari has become quite proficient at the guitar, favoring a delicate, finger-picked style. By their own count, they have written more than 70 songs, though only a fraction have ever been recorded.

Zangari’s songs don’t sound like the result of a childhood steeped in jazz, and they admit to being hopeless when it comes to music theory. (“Even on the guitar, I don’t know what chords I’m playing. It’s just shapes to me.”) Instead, their influences are more modern: the bluegrass-chamber group Punch Brothers, the Americana singer-songwriter Sarah Jarosz. “Somebody has come up and said, ‘You listen to Sufjan Stevens, don't you?’ Which is very accurate,” Zangari said with good-natured chagrin. The most identifiable touchstone may be the harp-playing indie folk musician Joanna Newsom, with whom Zangari shares a whimsical experimentalism and a preference for storytelling over confession. (And, yes, a weird acoustic instrument.)

“I used to write more about, like, leaving childhood and growing up and becoming an adult because I was 20, 22. And now I'm getting a little bit older, and I find that I write a little bit less about that,” Zangari said. “But I still write a lot about gender.”

The gender thing: It’s impossible to avoid completely. Zangari has been using they/them pronouns since college, but only recently started performing as Lee Zangari, instead of their given name, Noelle Micarelli.

“I was making all this music that was really informed by gender and queerness and kind of a trans perspective, but I was walking around like that wasn't really important to me,” Zangari said. “The name change was a way to very consciously stop doing that.” They chose “Lee” because it was gender-neutral and “Zangari” because “I thought it would be funny to replace my long Italian last name with another long Italian last name.”

But it would be a mistake to boil Zangari’s body of work down to a single theme. They find inspiration in the science fiction of the author Ursula K. Le Guin and the work of the famously reclusive artist Joseph Cornell, who created a vast imaginative world despite rarely leaving his hometown. Zangari's songs bear much in common with Cornell's meticulous assemblages of found objects: detailed and surreal, the mundane rendered profound by surprising juxtapositions. In the song “Marie Antoine,” Zangari riffs on a Cornell assemblage of a doll suspended by strings over a mountainous landscape, in whose vacant gaze the songwriter imagines a kind of existential crisis. “I don’t know what I like/ I don’t know what to try to be,” Zangari sings. “Little Marie Antoine/ Lives in a box/ Tiny and inoculated.”

Sometimes, Zangari will open up the dictionary to a random page and use the words there as a prompt for a song. “There are things that you would never put together in life that are together [in the dictionary] because of some kind of arbitrary coincidence,” they said. It’s a tactic that may bring to mind the avant-garde composer John Cage, who liked to leave compositional choices up to chance by consulting the I Ching, an ancient divination text. (Zangari, in keeping with this experimental bent, also dabbles in found-sound collage.)

At their best, Zangari’s songs mine intimacy from abstraction. Take, for instance, “Sundew,” which was inspired by carnivorous plants, “something that’s beautiful but also dangerous and is a larger thing that consumes smaller things,” Zangari said. The song’s lyrics, likewise, move from the large to the small and back again. “The oilskin, the fisherman, the marrow in the rib/ The salmon fin, the wave it’s in, the ocean and continent,” Zangari sings while strumming a shambling waltz. The chorus flips to a more personal register. “Once there was me and then you and then me and then you … And a dream of a dream of a dream of a tune/ That we dance to from midnight to noon.” The lyric is unexpectedly melancholy, holding in equal awe the complexity of the universe and the mysteries of the human heart.

Zangari has only released a handful of EPs and demos, which were recorded at home with almost no input from anyone else. But the singer-songwriter is finally at work on a studio album, which will feature, at long last, other musicians.

“I've done a lot of playing by myself, which is nice because you don't have to schedule with anyone,” Zangari said. “But it's a little lonely.”

The musician turned to their laptop and pulled up an in-process version of “Marie Antoine.” Zangari’s voice, clear and bell-like, emerged from the tinny computer speakers. Now, drums – tasteful and unobtrusive, nothing too dramatic – accentuated the march-like dulcimer part that Zangari had so often performed solo. A small but sure step out of a solitary world.