"Two by two, they come screaming down the 85-foot-long, waist-high wooden track, trailing rooster tails of sawdust and long, yellow extension cords that power them to the finish line."

That is how reporter Sean Cole began his treatise on the New England Belt Sander Racing Association, which first aired on Only A Game on April 13, 2002. But here’s the bit everyone remembers:

Gurner is a woodworker and former champion of this sport. But for some reason he’s really enthusiastic about the idea that this might be the last time NEBSRA, an organization he helped found, holds a belt sander race.

“It’s such a huge pain in the butt to put this thing together," he says. "It takes a village."

“And the village is tired,” I ask.

“Yeah, the village is getting old.”

There’s the theme to settle on, invitations and t-shirts to design, food and beer donations to arrange and the charity component to coordinate. One NEBSRA volunteer told me this event is as much trouble as planning a wedding.

Gurner’s in charge of trophies. This year’s features a glowing disc topped with a golden sander being driven into the ground. The image carries a very specific message:

According to what NEBSRA told Sean in our first story, the sport’s origin was somehow related to the 1988 Olympics. But everyone now swears the sport emerged organically at a Halloween costume party.

“And it was on the floor with upright 2x4s guiding the belt sanders and just a pile of blankets at the end to stop them somehow,” Solem says. “It was very informal. And we could all be down on the floor those days because we were all, you know, young and lithe and all that.” 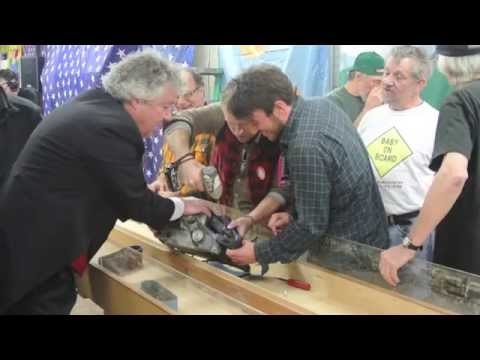 Today’s less-than-lithe spectators stand along one side of the Sprint 2000, NEBSRA’s 85-foot-long, waist-high belt sander track. It runs the entire length of the Sander Dome, a woodworking shop on the second floor of a brick building. When pitting power tool against power tool, false starts are common. And sometimes the sanders outpace their bright yellow extension cords and come to a halt in the middle of the track.

Belt sanders race in two categories: stock — which are often highly decorated but otherwise unmodified machines — and modified — where most everything, including the drive train, has been swapped out for something faster.

The sanders are given names, too. Glenn Dubler’s Blessed Virgin of Abrasion looks ready for the Day of the Dead with yellow and red silk flowers, a bunch of attenuated plastic skeletons and a large, gold-crowned, glow-in-the-dark Virgin Mary water bottle.

With all that extra weight, it seems almost like a miracle when Dubler’s creation actually wins a race.

“Now did you ever worry when doing all this that you were actually slow down your belt sander?” I ask.

“I plan to lose,” he says. “This is not a fast sander. It has never won on the merits of its speed, so that’s not a consideration.”

I get my first taste of true sander speed — and the accompanying danger — when the modifieds start racing. Luckily, I’m chatting with Dave Kenyon, another of NEBSRA’s founders, when a sander runs off the track.

“Do you ever worry for your safety?” I ask.

But Kenyon actually seems more wary of the media than he is of crashing belt sanders.

“You must know you guys did a show years ago?” he says.

“So I’m here under false pretenses?” I ask.

But, before I can leave, Kenyon shoves his beer in my hand and climbs over the red velvet rope separating the spectators from the track.

As Kenyon works to push the crowd back away from the track, another spectator asks me if there's just been an accident.

“They seem to be worried about a potential accident,” I say.

“Ohhh, there’s a dent in the elevator door from the last one,” he says, pointing.

This is the third time someone’s pointed out that dent in the elevator door. For about 10 minutes, Kenyon fusses over the position of the crowd and a 60-pound, lithium-ion-powered sander outfitted with a motorcycle engine. It has a theoretical maximum speed of 85 miles per hour, and its name is Bruce.

Finally satisfied, Kenyon comes back to retrieve his beer. I ask him whether he requires any safety checks before a sander’s allowed to race.

“I’d rather not talk about that,” he says.

Racer Sarah Beth Zurit interrupts. “These are things that we don’t really talk about,” she says, laughing. “We actually do. We do have a very well-developed list of things we don’t talk about, and this is certainly one of them.”

“Thank you very much for your time,” she adds, attempting to send me on my way.

But I stay long enough to watch Bruce surge to life and almost immediately slam into the spring-loaded preventer at the end of the track. It’s spectacular, but no one dies. So the crowd goes back to reminiscing about old times.

There are other belt sander races around the country. Some even have corporate sponsors and professional crews. But NEBSRA likes to believe theirs is the first — and the best. Kenyon is proud of how far this event has come in the past quarter-century.

“It’s so much more now. It’s homecoming. This is real homecoming. People have come up to me and said, ‘Thank you, thank you for doing this.’ That’s nice," Kenyon said. “This is how we get together,” Kenyon continues. “There’s not enough rituals in our life anymore — not enough tradition. This is what passes for tradition.”

And despite the protestations of NEBSRA’s founders, this seems like a tradition that’s not quite ready to come to an end.