Perhaps there is a sport that broadcaster Al Michaels hasn't brought us in his half-century career behind the microphone.

Nah, probably not. He's done the one where they ride motorcycles on ice. He even suited up in leathers for it. More on that below.

Michaels has a book out with L. Jon Wertheim titled, "You Can’t Make This Up: Miracles, Memories, and the Perfect Marriage of Sports and Television." Michaels joined Bill Littlefield to discuss his memoir and to share some of his favorite memories from his career. 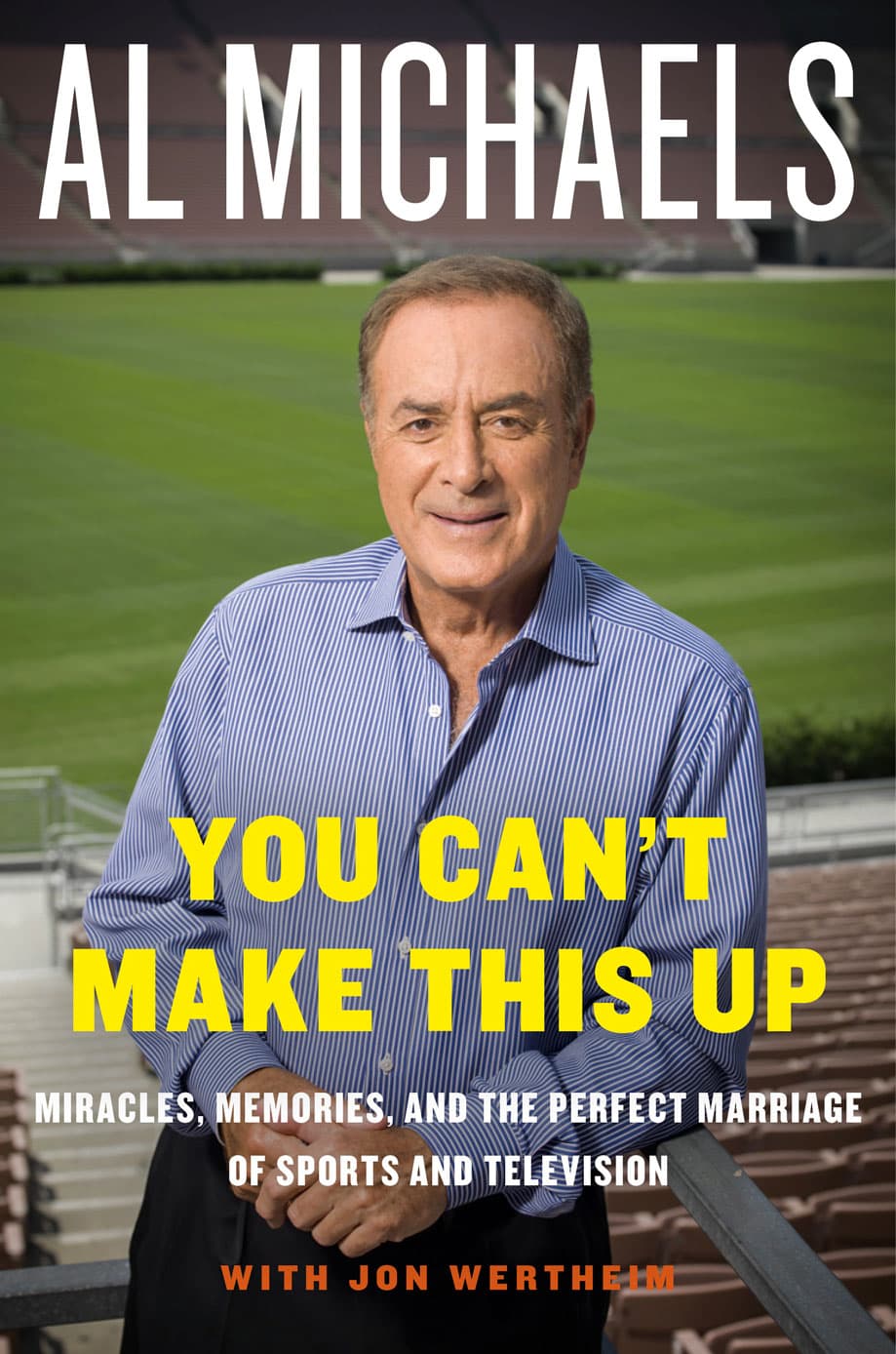 BL: When you dressed up in leathers for that motorcycles-on-ice feature for ABC’s Wide World of Sports, they didn’t actually make you ride a motorcycle on ice, but it was close, right?

AM: Well, it's probably as close as I have come to getting killed. I had just joined ABC. I was the new kid on the block on a staff that included the iconic figures Howard Cosell, Jim McKay, Frank Gifford, Keith Jackson, so I'm going to do anything. And I go to ... [a] small town in the Bavarian Alps about halfway between Munich and Salzburg, Austria. And they have this event called motorcycles on ice which is wild. It's a quarter-mile speedskating track covered with ice. And all of these Eastern Europeans, Bill, came out, from, at that time before the [Berlin] wall went down, Czechoslovakia, Poland, the Soviet Union, Hungary.

And they decided, well, why don't we do something different? We'll have me open up the show, instead of standing there with a mic and saying, "Hi, welcome to motorcycles on ice," why don't I get on one of the motorcycles with spikes protruding from the tires, come down the straightaway, get off the bike with a mic and welcome you to "Wide World of Sports?" So I say fine, without telling the producer that I had never been on a motorcycle, and I had only really been on a Schwinn Bike, and I had just recently taken the training wheels off of that.

So at one point I'm revving it up to the point where it must be screaming at like 15,000 revolutions per minute, and I am ready to let the clutch go because I don't know what the clutch is. And fortunately at that point, somebody grabbed my hand and made sure the clutch got engaged again. So that was the way I broke into "Wide World of Sports" and fortunately here I am to talk about it.

BL: In "You Can’t Make This Up" you recall, among many other things, your first visit to Ebbets Field to see the Brooklyn Dodgers play. And one of the things that you remember most vividly is looking up into the press box. Really? Why weren’t you looking at Gil Hodges, Pee Wee Reese and Jackie Robinson?

AM: I was looking at everything at that point, Bill. I was looking at the field and how unbelievably green the grass was. And the Dodgers uniforms are, as Vin Scully has always described them, "wedding cake white." Perfect. There's signage on the outfield walls. And Ebbets Field was just the most wonderful place.

So I walk in at 6-years-old with my father, and I'm mesmerized. And it's the first thing I can remember in life and thinking to myself, "How can I come here every single day?"

And at some point I remember looking into the press box and looking at the broadcast booth. And to think that all those years ago, the iconic Red Barber was there, a very good announcer with the name of Connie Desmond and a young kid with the name of Vin Scully.

BL: Al, you have brought people Super Bowls, the World Series, all manner of Olympic events, including, of course, the 1980 hockey game in Lake Placid between the U.S. and what was then the Soviet Union. And obviously you've been terrific at these thing because you've been employed for many, many years. Was there ever an event where you started talking and suddenly realized you were unprepared?

AM: I can't say that that's ever happened because I won't allow it to happen, Bill. But there have been events where I will come on the air, and you might slightly lose a train of thought. But not feeling prepared, no. I just would never let that happen.

I knew somehow I had to be able to find something to get me to Ebbets Field every day of my life.

BL: The subtitle of your book refers to “the perfect marriage of sports and television.” But the coverage of sports on TV has changed so dramatically over the course of your career. It used to be all about ABC, NBC and CBS. Then ESPN came along. And now there are channels devoted exclusively to one sport -- that's probably even one for motorcycle racing on ice. Has the “marriage” to which you refer in the subtitle just gotten better and better over the decades?

AM: Basically, yes. It used to be when it was on the three networks, there was a specialness for a show like "Wide World of Sports," which was the first show to really take you overseas. Satellite technology was coming into play. And you could go behind the Iron Curtain, and it was one of the few shows that allowed you to do that.

So what's happened with sports on television is there is so much more of it. For people who can't get enough of it, it's phenomenal. Some people who think, "Well, there's too much of it," I always tell them "Hey look, if you like sports, but you feel there's too much of it, there's a little button, it's an on/off button, so turn it off. So just watch what you want." I mean, nobody 's saying you have to listen or watch. So it's good and bad.

I think HD TV is fantastic. I mean, to me, football is much better to watch on television than in person. Now in person, at the stadium, you have a different experience.

You have that communal experience with the fans and you can go to the office the next day and say, "I was at the game last night" and that gives you a certain cachet. But you can see the game about a hundred times better on television.

BL: I’m afraid that this is going to seem like an inevitable question for a man who’s been broadcasting sports for as long as you have, but is there one event — or even one moment — that stands out as the most gratifying of your long career?

AM: Well, I would say that in terms of the event itself, nothing could ever top the United States and the Soviet Union in Lake Placid on Feb. 22, 1980 because that was, as Sports Illustrated put it at the end of the 20th century, probably the greatest sporting moment in the United States in the 1900s. People still to this day talk about it. Those who remember watching it or having been there, they glow when they talk about. In terms of the television production, it wasn't very good. And I would know that because I knew the technical issues that we had had at Lake Placid.

So if I look at the event as a television production: below average. But nobody will ever know that, Bill, because when they say the Olympics in 1980, there is only one thing you're ever going to think about, and that's the U.S. against the Soviet Union. In terms of the event itself, Bill, nothing can top Lake Placid.

Al Michael's call of the final seconds of the U.S. beating the Soviet Union in 1980:

BL: You write in the book that you don’t agree with the contention that a tragedy like the earthquake that occurred during the '89 World Series, “puts things into perspective,” you regard that as a cliché and I think you're right because we shouldn’t allow ourselves to lose perspective. But I have to wonder, in retrospect, if you feel that, just for a moment, you lost perspective when you made that famous call at the end of that hockey game in Lake Placid and asked, rhetorically, “Do you believe in miracles?”

AM: It's a good question, and I think in that particular case, first of all, the game is ending. I don't have anything scripted. And what happened with that, is it came out of my heart. Somebody wrote it was the 9-year-old in me coming out, and I'll buy that. I think that's exactly what it was. Look, I love sports. I'm witnessing one of the most unbelievable upsets ever. It's happening in the Olympics. It's happening in our country. I have an audience that is rooting 99.99 percent for the U.S. team. So when the puck came out to center ice, the word that came into my mind was "miraculous."

I had no idea that 35 years later, people still say ,"Oh, we love when you..." Great, that's wonderful, and it's a nice coda. The players did it, I didn't do it. They always say to me, "Hey, what a great line," and I'm going, "Hey, you guys did it. You guys won the game, 4-3. I didn't. I'm just sitting there announcing the game." But it formed a nice climax to an event that most people just think about and revel over.

Bill's Thoughts On "You Can't Make This Up":

By 1984, Howard Cosell “had become the world’s biggest pain in the ass.”

The characterization of Howard Cosell toward the end of his broadcasting career won’t surprise too many people, but it’s significant in the context of the book, because Michaels has only good things to say about most of the other broadcasters with whom he has worked for the past 40 years or so.

He’s less kind to some of the organizations for which he has worked. He regarded ESPN’s decision to begin Monday Night Football telecasts in 1998 with a pregame show at the ESPN Sports Zone in Baltimore as “a baldfaced way to promote ESPN’s new restaurant chain … 'sinergy' rather than synergy.”

"You Can’t Make This Up" is full of the stories you’d expect from a man who’s been broadcasting Super Bowls, the World Series, various Olympic events, and motorcycling on ice for all of his professional life, and lots of those stories are entertaining. And there is an entire chapter titled “Do You Believe in Miracles?” (To imagine that there wouldn’t be such a chapter in a book by Al Michaels, you’d have to believe in them.)