But there’s another record you might not have heard of … and it would be pretty tough to break, too.

On July 22, 2008, in the closing seconds of a game between the Detroit Shock and the L.A. Sparks, a brawl broke out. Nancy Lieberman was at a restaurant with her son T.J. for his 14th birthday. They watched the melee on TV. 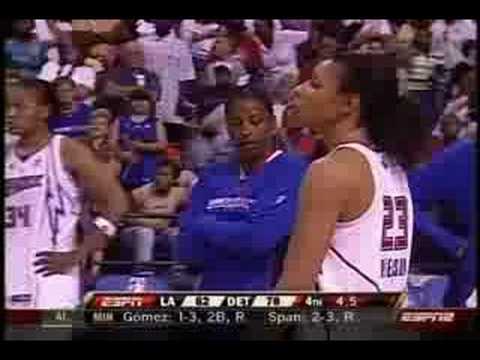 Lieberman was a 50-year-old analyst for ESPN. But watching the brawl, she didn’t see the situation through the lens of a sportscaster. Instead ...

It all started a year earlier, at the 2007 WNBA All-Star Game.

"I was doing the TV for ESPN," Lieberman says. "And, you know, they had the Skills Challenge."

The producers wanted Lieberman to test out the Skills Challenge, an event designed to showcase a player’s dribbling and passing ability, so Lieberman could better describe it for the TV audience.

"So I took my shoes off, but I was, you know, dressed up more for TV than for — I didn't have any athletic gear on," Lieberman says. "So they're like, 'Ready ... go!' And, as I finish, I didn't realize that Bill Laimbeer was sitting, like, off in the bleachers somewhere."

Laimbeer was the head coach of the Shock.

"I wanted to see what my limits were, what my capabilities were and, you know, to walk out there and go, 'Well, who’s the 25-year-old, and who’s the 50-year-old?' " Lieberman says. "If you lined our bodies up, and you didn’t see our heads, you wouldn’t know. That was my goal."

So, when that brawl broke out between Detroit and L.A., Lieberman was ready to go. The league suspended five players from each team and one of Detroit’s assistant coaches.

"And Bill called me late that night, and he goes, 'Now, I got a couple roster spots available,' " Lieberman recalls. "He said, 'I think this is as good a time as any.' And so, he says, 'Can you come to Houston tomorrow?' And I said, 'Yes, sir.' "

Nancy Lieberman is no stranger to setting records. In 1976, when she was 18, she became the youngest basketball player to medal at the Olympics. In college, she led Old Dominion University to an NIT title and two national championships. In an era when few talked about women’s basketball, Lieberman was a national star.

Lieberman was inducted into the Hall of Fame in 1996. But, it wasn’t until the following year that the WNBA began.

"So, I played at 39," Lieberman says. "I guess I was the oldest player in the league at that point."

Lieberman says she wanted to play until she was 40. But after that season, she received an offer to become the head coach and general manager of the newly founded Detroit Shock.

"And I was so excited. Six months later, I was — my family moved to Detroit," Lieberman says.

After three seasons, Lieberman left the Shock and became an analyst at ESPN.

'I'm Signing A Contract In The Morning'

"I didn't really have much time to be by myself, except I did go back to my room before we went to the arena. And I just, I sat there. I can remember sitting on the bed, just kind of thinking about what, you know, what it meant to me. You know, I have given my life to this game. And here it was on yet another level." 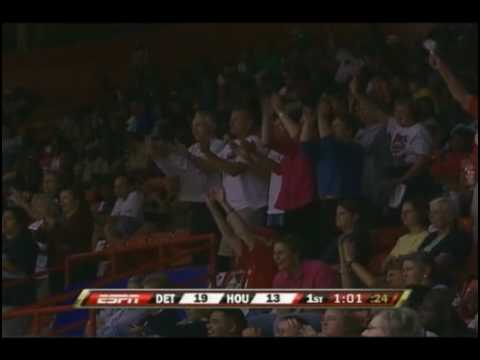 When game time rolled around, Lieberman didn’t get the start, and that was OK.

"The funny part is: I’m sitting on the bench, and my son is sitting, like, across, courtside," Lieberman says. "And he’s, like, looking at his watch and tapping his watch, like, 'Come on. When are we gonna get this thing going?' I'm like, 'Dude, man. Coach is gonna put me in when he wants me to go in.' "

And it didn’t take long before that happened. With 1:01 left in the first quarter, Lieberman entered the game.

In her day, Lieberman had been known for no-look passes.

"And then when I threw the pass, you know, to my teammate, and she scored, she was like, 'Oh, my gosh, oh, my gosh. I almost didn’t see it,' " Lieberman says. "I was like, 'I’m just so happy you made it.' And it was all over SportsCenter."

The Most Unbreakable Record Of All-Time?

The Detroit Shock lost, 61-79, to the Houston Comets. And Lieberman posted just 2 assists in 9 minutes. But she had impressed even her opponents by breaking her own record as the oldest person to ever play in a WNBA game.

"You know, I remember Tina Thompson hugging me and lifting me off the floor and telling me how proud she was of me," Lieberman says. "And that’s all you could do as an athlete is hope that you’ve done it the right way, and you’ve been a good influencer.

"I mean, I had hundreds of thousands of letters from people all over the world. You know, nobody was negative — probably T.J. because he wanted me to play more minutes. But it was really great. And even with Bill it was, 'There’s no need to play another game.' And I was like, 'It can't get better than this. Why would I do anything other than what I just did?' And I was like, 'That's it. I'm retired.' "

A few days later, Lieberman was back at her old job at ESPN.

So, is this the most unbreakable record of ‘em all?

"Every record is breakable," Lieberman says. "It's just how far it's pushed. If somebody does it, I would certainly applaud them. You know, I'm not here to to hoard anything. We're kind of pushing each other to greatness."

Nancy Lieberman is now the head coach of team Power of the BIG3 basketball league.

Jonathan Chang Producer/Director, On PointJonathan is an associate producer at On Point.