When Steph Curry called Dr. Anthony Fauci, head of the National Institute of Allergy and Infectious Diseases last week, the NBA star immediately noticed the miniature hoop hanging on the wall just above the doctor's head.

"I like that background," Curry said with a laugh.

"He was a great basketball player," President Donald Trump interjected during a recent press briefing. "Did anybody know that? He was a little on the short side for the NBA, but he was talented. He won a game, I read the story, he won a game that was unwinnable against a great team."

And for more on that, we spoke with the Wall Street Journal's Ben Cohen — the man who wrote the story the president says he read.

KG: OK. So I actually want to start where I am guessing your reporting started. A couple of weeks ago, you wrote about Dr. Fauci's long standing habit of running five miles every day at lunchtime. And I'm assuming that it was during that reporting that you first heard about Tony Fauci, a.k.a. 'Fauch,' captain of the 1958 Regis High School basketball team?

BC: It actually started a few weeks before then, believe it or not. This story actually started, the day that the NBA shut down, which was really this extraordinary day in American sports. If you remember that day, March 11, ended with Rudy Gobert testing positive, and the NBA immediately suspended its season. But what happened in the morning was that Dr. Anthony Fauci testified in front of Congress. 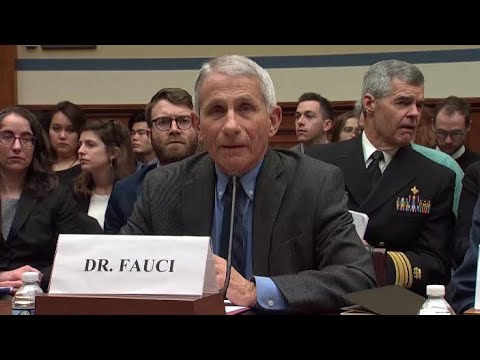 And a Republican congressman asked him:

Is the NBA underreacting or is the Ivy League overreacting?

And that was a really interesting question, because the day before the Ivy League had canceled its men's and women's conference basketball tournaments. And so what this congressman was basically saying was like, 'Who is right here?' And he was actually expecting Dr. Fauci to say that the NBA was right and not the Ivy League. But Dr. Fauci said instead was that:

We would recommend that there not be large crowds. If that means not having any people in the audience where the NBA plays, so be it.

And this was a really fascinating statement at the time, and it sort of caused alarm bells. And so, I thought it was just so interesting that this guy, who was the captain of his high school basketball team, more than 60 years later would sort of be responsible for shutting the NBA down.

KG: Dr. Fauci is not a large man. He would not have been a large teenager either. So how did it come to be that he was the captain of his high school basketball team?

BC: Well, he's probably somewhere between like 5-foot-5, 5-foot-7. And he was always short, but he always was this incredible leader. He was this classic little point guard. He was a great ball handler, an annoying defender. One of his teammates said that he would literally dribble through brick walls. Now, I don't think he would literally dribble through brick walls, but you sort of get the sentiment. You can kind of picture the type of player that Tony Fauci was just by looking at him.

KG: And how did they describe his leadership off the court?

BC: What they say is that he wasn't a yeller and he wasn't some "rah-rah-rah" guy, but he was someone who everyone on the team looked up to. What one of his teammates, Tom McCorry, who actually would become a future college basketball coach, said was that he worked hard and he was very unselfish, kind of the way he shows now. He really is the same person.

KG: Even in high school, the future Dr. Fauci was known for refusing to give up, even in the face of seemingly insurmountable odds. Tell me about the game Regis High played against Fordham Prep.

BC: Yes, this was in the middle of what can only be described as a terrible season for Regis High School. They were 1-16, and the star of that Fordham Prep team was a guy named Donnie Walsh. And a couple of the players on that team remembered his name, Donnie Walsh. And when I said, "You mean like the Donnie Walsh?" They had no idea what I was talking about.

Fordham Prep had come to Regis a few weeks earlier and won by 16 points. What one of Dr. Fauci's teammates, John Zeman, said was, "Nobody gave us a chance. Everybody figured it was going to be a blowout. Tony said, 'No. We are going to win this game.' And we did."

I think that was really the biggest game of Dr. Fauci's life. And it sort of showed what a leader he was even when he was only 18 years old.

"Nobody gave us a chance. Everybody figured it was going to be a blowout. Tony said, 'No. We are going to win this game.' And we did."

KG: What did the Regis players take from that win? How did it affect their lives going forward?

BC: Well, I think that's a great question. I mean, it sort of shows the power of high school sports and how one big win can stick with you forever. All of these players who I called — I mean, these guys are 78, 79, 80 years old now — they all remember this basketball game 62 years ago.

And when I ask them, like, "Do you think Dr. Fauci would remember?" I mean, this is someone who lived through the HIV/AIDS epidemic. He cared personally for Ebola patients. He has seen anthrax and swine flu and every public health crisis for the last 40 years. All of them to a man said he would definitely remember this game. One of them said, "I would bet a lot of money on it." High school sports are at once meaningless and profoundly meaningful.

KG: So "Fauch" grows up, becomes a doctor. And in 1984, he becomes the head of the National Institute of Allergy and Infectious Diseases. Since then, he's served under six presidents and, as you say, through many epidemics. And until quite recently, he's carved out an hour almost every lunchtime to go for a run. How did he find the time?

BC: He made the time. He manufactured the time in his busy schedule because running was so important to him. There was this precious hour of the workday right around lunch every day when he went for a run. In fact, in the '70s, when he was a young researcher at the National Institutes of Health, he actually ran with the running club at the NIH, which, of course, is called "the Health's Angels."

KG: I mean, in a typical day, Dr. Fauci would get up before dawn so that he could have this hour at lunchtime, right?

BC: That's right. I mean, he is a self-described compulsive workaholic. And yet he ran everyday at lunch. And the question is 'Why?' Right? Like, why would someone, who is so busy and with so much on his mind, carve out an hour every day to run? And, that's actually the answer.

You know, running is still acceptable — and even encouraged — now in this time of social distancing. So Dr. Fauci used to run like five, six miles. He was a marathoner in the '80s and '90s. Now he's more of a power walker. He is 79 years old, even though he doesn't seem it when you see him on television. But one of the reasons he doesn't seem like he's 79 is because he's in incredible shape.

KG: Well, Dr. Fauci kept up his daily runs — now they’re power walks — through AIDS, anthrax, Ebola and swine flu. But here he is on March 18 on the podcast "Pardon My Take":

Unfortunately, over the last several weeks with the 20 hour days that we've been putting in, I haven't had a chance to do it except on the weekend.

If we didn't already have enough evidence that this is serious, it sounds like the fact that Dr. Fauci has given up his daily runs should tell us all we need to know, right?

BC: I think that is one way of looking at it. I mean, this is the greatest challenge of his life — I think it's fair to say — and never has he been busier.

KG: So put all this together for me. What does what you've learned about Tony Fauci, the sportsman, tell you about Dr. Anthony Fauci, the scientist at the center of our country's response to the COVID-19 pandemic?

BC: I think that we need this clear-mindedness of Tony Fauci more than ever right now. And if sports helped him learn what it means to be a leader and is helping him lead at this precarious moment, then God bless sports.