Conservative Catholic intellectuals arguing about God and President Trump. It’s a world Will Arbery knows well. It’s his real life, and the inspiration for the new play "Heroes of the Fourth Turning."

Will Arbery, playwright, performer and filmmaker. Writer of "Heroes of the Fourth Turning," a play about a group of conservative Catholic millennials in Wyoming arguing over everything from God to President Trump. The play is currently in production at Playwrights Horizons in New York. (@willarbery)

What made you decide to write this play?

“There are a lot of reasons. I mean, part of it is just I grew up in this world. I grew up in backyards quite like the one in the play. Mostly in Texas, is where I grew up. But, my parents always taught at small schools like this. And there would be my own sisters — or students, undergraduates, graduates, alumni, other professors — gathered in the backyard drinking, smoking cigarettes. And just talking it out, and debating, and just being exposed to the intellect, and the passion, and the poetry, and the nuance between all of their different beliefs, even though they all on paper believe roughly the same things. There was so much debate. So part of it was … I feel like I've had this play in me my whole life, just wanting to capture that feeling of being in a dark backyard, with that kind of passionate debate going on.

“But then, once the election happened in 2016, being a theater-maker surrounded by liberal to progressive theater-makers who felt this sort of desperate need to understand who these people are who voted for [Donald Trump]. Because it was a lot more than just what was being fed to us about these blue-collar workers. You know, it was 60 million people. Like, who are these people? And I said, ‘You know, well, I can give you access to at least five of them.’ And, so, I wrote this play really out of a sense of responsibility. And then it became, I made this strong decision to not have a liberal foil in the play, or a stand-in for the audience. Because I wanted to really present what's  — more or less — like a safe space for these conservatives to hash it out, because that's how I think you can really immerse yourself in that world.”

“One thing that I write about — and that I always will probably write about — is women who are trapped in, and upholding, a system that's designed to limit their autonomy. And that's why this play, which is about conservatives in Wyoming, you might instantly think of that as maybe a male-dominated environment. But, this play is entirely female-dominated. All the big debates are between women. And for me, that's just true to life. I mean, I think that the demands that are called for by the church and by the pro-life movement — which is such a such a driving force behind the election of Donald Trump and sort of where we are in politics now — all of those play out, sort of, in women's bodies, and the decisions that they have to make, and the ways in which they rationalize, or spiritualize, or just accept or deny those decisions.”

"This play is entirely female-dominated. All the big debates are between women. And for me, that's just true to life."

What’s been the difference between reviews of the play by conservative Catholics vs. other reviewers' reactions?

“I think the main difference that I've noticed is simply that — for non-conservative critics who are coming to see it — a lot of their experience has to do with hearing these views go uncontested. And just having to sit with that, and sit with characters who you come to care about. And sort of the boldness of that experiment, and just how rare that is for conservatives. I think something else is happening. I mean a lot of the views --maybe not all of them, but for some people who see it — maybe all of the views that are presented, at least by one character, seem accurate and seem like the truth, or the things that they actually believe. And the people who are debating those views seem like people that they've actually debated in their life. So, the play becomes much more about like, ‘Well, what is it leaving us with? Is it leaving us with a sort of endorsement, or a condemnation? And if it's a condemnation, then where is it? And let's root it out and find it, because it's probably hidden like a Trojan horse coded somewhere in the play.’ Or, you know, it's just a whole other level of experiencing the play.”

On expressing a variety of historical opinions in this play

“The fact of the matter is, that as the playwright, I don't think it necessarily matters what I think about the view of history. And I think it would be a disservice to those who still want to see the play, or read the play, to have too much of an understanding of what my actual view, or my actual agenda is. I actually want the play to be removed from that idea of agenda, and just encounter these characters on their own terms. So, Teresa is a character who really believes in this theory [of The Fourth Turning, developed by William Strauss and Neil Howe]. She believes in it because [Steve] Bannon did, and Pat Buchanan before him. And, so, I need to sort of leave it at that. Partly out of a belief because the theater space is a space where we can gather and really experience the beautiful terror of each other, in a relatively safe place — and really behold each other and look at each other. And to impose too much of my own views upon that, I think would be a disservice to this particular project.”

"I actually want the play to be removed from that idea of agenda, and just encounter these characters on their own terms." 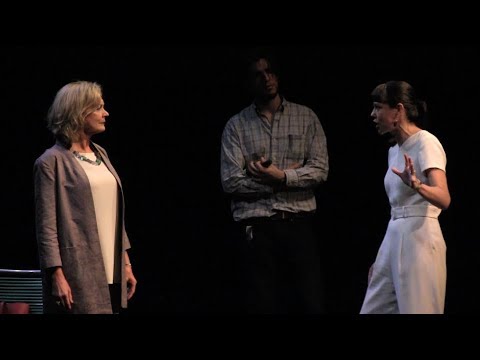 New York Times: "A Play About God and Trump, From a Writer Raised on the Right" — "For a young playwright in New York, it’s one thing to draw buzz from critics and theater fans. It’s quite another to have your dense and boundary-pushing Off Broadway play become a talking point among religious conservatives — and not because they hate it.

"Shortly before the opening last week of 'Heroes of the Fourth Turning' — his new play about a group of conservative Roman Catholic millennials arguing all night in a Wyoming backyard about God, love and Donald Trump — Will Arbery sent the script to Rod Dreher, the prominent Orthodox Christian blogger.

"And Dreher responded with an exuberant 5,000-word blog post, praising the play’s 'depth of moral vision' and declaring, 'I don’t know how anyone — progressive, conservative, anyone — walks out of "Heroes of the Fourth Turning" without the conviction that somehow, they have to change their life.' "

The American Conservative: "Will Arbery’s Heroes" — "Decades from now, if social historians wonder what it was like to be an American conservative in this tumultuous era, they will consult Will Arbery’s breathtaking new play Heroes Of The Fourth Turning for profound insight. I have not seen the play, but I read the script last night, and I kept thinking: this really can’t be this good, can it?

"It is. People like me — politically and religiously conservative — don’t expect to encounter contemporary art about ourselves. Reading Heroes brought to my mind the one other time in my life when I encountered serious art that was about my people: discovering the short stories of Flannery O’Connor in high school. O’Connor wasn’t writing about conservatives per se, but she was writing about Southern country people, and showed that you could make something deep and beautiful and universal out of our ordinary lives and struggles. That’s what Will Arbery has done for today’s political and religious conservatives in Heroes."

Catholic Herald: "An extraordinary play that challenges progressives and conservatives alike" — "Increasing numbers of people talk to me about their growing sense of 'crisis.' A friend recently wrote, 'my standard assumption when everyone starts saying ‘we can’t go on like this’ is that they are right, we can’t.' But if we can’t go on like this, how will we go on? On what will our crisis turn?

"Even in the rarefied environs of the New York City theatre community, people seem interested in this question, as I discovered this past weekend watching an extraordinary new play about Catholic conservatives in Wyoming.

"'Heroes of the Fourth Turning' was written by Will Arbery who grew up in a conservative Catholic home, the son of Wyoming Catholic College professors Glenn and Virginia Arbery — now he is one of New York City’s rising stars as a member of the prestigious New Dramatists. So when Arbery writes a play about four young Catholic conservatives who gather for a reunion to toast one of their professors who had become president of the college, he knows his conservative subject, and he knows his progressive audience in equal measure."

Editor's note: A former version of this article incorrectly quoted playwright Will Arbery on his statement that all of the big debates in "Heroes of the Fourth Turning" are between women. The error has been corrected.