NPR’s Steve Inskeep tells the story of one of America’s first celebrity political couples and their impact on history in his new book "Imperfect Union." 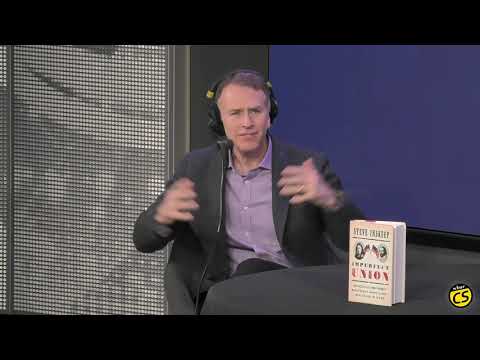 Once upon a time in American history, the Republican Party nominated a candidate for president whose political career was based on his fame, and whose name was plastered on buildings all over the country.

In 1856, less than a decade before the start of the Civil War, the debate over slavery threatened to split the country in half, while the invention of the telegram and rise of partisan news outlets exacerbated a new age of political strife and hostility.

Steve Inskeep, host of NPR’s “Morning Edition,” understands there are some parallels between American politics then and now.

How does a famous explorer with no experience in government ride a wave of political and social tensions to become the Republican party’s first presidential nominee? With a lot of help from his politically savvy wife.

Inskeep sat down with On Point’s Meghna Chakrabarti to discuss his book, the cyclical nature of American history and what the Fremonts tell us about politics today.

On the telegraph’s impact on American politics

“People then realized that this was a profound change in the human condition. That you could suddenly know with certainty what was happening just then in another city 50 miles away, or 100 or 500 miles away. And within a few years, telegraph wires connected all the major cities in the United States. And it was at the same time that weekly newspapers were becoming daily newspapers. And there was suddenly this simultaneous national conversation. Which sounds like it ought to bring America closer together, but did not. … They were getting the same news, but filtered through partisan news editors. And Northerners would read one version of Charles Sumner's caning. And southerners would read another version of Charles Sumner's caning. And then they would read ... in the North, where they were horrified by this, they would read about how the Southerners were celebrating it. And it drove people farther apart to have this instantaneous reaction, and reaction to the reaction all the time.”

“Thousands of Republicans, they’re outside the Fremont House in New York City. John does come to the balcony and says a few words. Nobody can even hear him, he’s not a great public speaker. And then they chanted for her. It's a remarkable moment. One thing that it shows is that before that campaign in 1856, Jessie Benton Fremont had made herself famous. She had raised her public profile. She was often a defender of her husband when he was in controversies. Letters written by her would end up in the newspapers. Articles about her would describe her fluency in various languages, talking with ambassadors in Washington and so forth. She was in the news. And then she became a symbol for progressive women. This was a time when women were seeking the right to vote. They didn't have it, but some were seeking it, and it was a time when women who weren't supposed to be involved in politics had found a way to be involved in the antislavery movement.

“It was considered OK for women to be engaged in benevolent causes to help people in need. And slavery could be said to qualify. And they were helping to power the antislavery movement. And they seized upon this prominent and accomplished woman as their symbol. And there were roars of approval for Jessie Benton Fremont. Now, candidates [did] not go out to campaign in the way that they do now. It was considered undignified. I mean, it's remarkable considering where we are now. But it was considered undignified for a presidential candidate to go out and give some kind of a crazy speech, speak profanities or whatever they might do, considered almost unimaginable. But there would be huge campaign events and women began attending these campaign events — in special ladies’ sections — but they were not even there before. There was something happening in the country and she became a symbol of all of that.”

“There is an old saying in politics that, in democracy especially, nothing is ever over, which can be a dispiriting thought. Bias and prejudice never really go away. Crazy ideas never really go away. Paranoia never really goes away, because it's part of human nature. And because new people are always coming into the political system, they're turning 18 or just getting interested at age 45 in politics or whatever it is. There are new people always coming in and they are attracted to some of the same old arguments. And so we have the same arguments over and over again. That's one of the things that I learn from studying the years before the Civil War. And thinking about the stuff that I cover as a news guy during the day or during the early mornings, as it were.

“But even as we have that same argument again and again and again, we advance, don't we? We would not want to pretend that race relations in the United States are no different today than they were then. We would not want to pretend that the debate over immigration is the same, even. There are these echoes, there are these similar ideas and these similar impulses. And yet, somehow, almost in spite of ourselves, we move forward. This book depicts a very dark time when slavery is legal, and when immigrants and foreigners are looked down upon and threatened, and when politics is repeatedly becoming violent and the country is coming apart. And it must have seemed very dark to people then in that moment. And yet they were within a few years of a great leap forward for human rights in this country and for the human condition, the abolition of slavery in the United States. It was just around the corner. Even though relatively few people at the time could even imagine what it would look like or how it would come about.”

On this current moment in journalism

“It's a pretty bad moment. I'm reluctant to say we're on our way to another Civil War. Circumstances are in many ways different. But it is a deeply polarizing moment. Partly because we are going through a demographic change just as they were in the 1840s and ‘50s. What's happening today, as many of us in this room know very well, is that certain groups of people — people of color, immigrants — are increasing in population more rapidly than the rest of the country is. That would not in any way be politically destabilizing if they voted, you know, roughly 50/50 between the political parties. But they don't. The growing populations are much more often with the Democratic Party than the Republican Party.

"And so you do have some Republicans — and I don't wish to generalize about all — but you do have some Republicans who see that as a profound threat, that they're going to be shut out of power forever. And this is something that President Trump openly said in his campaign in 2016. He says the quiet part out loud. That's one of his charms. And he said to his supporters, this is our last chance. This is your last chance to save the country, because if you don't elect me, the Democrats are going to let a bunch of illegal immigrants across the border — legalize them — they're going to vote and we'll never win again. This is a thing that he said. And he was expressing the fear of a fair number of people. When you have that fear that you're not going to just lose an election but be out of power forever, you're willing to go to extremes. And that's made our politics more extreme.”

Excerpted from “Imperfect Union.” Copyright © 2020 by Steve Inskeep. Excerpted by permission of Penguin Press, a division of Penguin Random House. No part of this excerpt may be reproduced or reprinted without permission in writing from the publisher.

The New York Times: "The Man Who Mapped the West, and the Wife Who Made Him Famous" — "For a man who shows up in most biographies of Abraham Lincoln, histories of California, Civil War chronicles and accounts of pioneering the American West, John Frémont has remained a relatively minor player. There are a few biographies of him, but there hasn’t been anything like Steve Inskeep’s revelatory 'Imperfect Union,' a fresh look that brings 21st-century vision to bear on the 19th-century story.

"In writing about both Frémont and his wife, Jessie, the aggressive promoter of his career, Inskeep does two important things. He shines an unsparing light on his subjects, and he finds unnerving similarities between the Frémonts’ America and our own. Like Candice Millard’s 'Destiny of the Republic,' an improbably thrilling book about the Garfield assassination, 'Imperfect Union' finds a big, resonant, star-studded subject that has been hiding in plain sight.

"To Inskeep’s credit, it’s an open question whether the book’s true hero is Frémont or his wife — the privileged daughter of Senator Thomas Hart Benton (great-uncle to the painter who was his namesake), who decided her life’s work would be serving as a stealth political adviser, fighting for abolition though she was born a wealthy Southerner, trumpeting her mostly absent husband’s achievements and being famous."

Minneapolis Star-Tribune: "Review: 'Imperfect Union,' by Steve Inskeep" — "From John and Abigail Adams to the Kennedys to the Clintons, power couples have captivated the national stage. As Steve Inskeep portrays in his absorbing 'Imperfect Union' there was no pair more glamorous than John Charles Frémont and Jessie Benton Frémont during the turbulent years leading up to the Civil War.

"Inskeep, the host of NPR’s 'Morning Edition,' deftly traces how the marriage mirrored the era’s ferment. John Frémont was raised largely in the coastal South, the illegitimate child of a French citizen and an already wedded aristocrat.

"Trained as a cartographer, he rose to fame by his knack for self-promotion, publicizing a series of Western expeditions in which he mapped sections of the Rocky Mountains and the Great Basin, even stumbling into the United States’ acquisition of California and claiming himself conqueror. In truth his judgment was scattershot and often self-sabotaging, his physical courage real but his vanity insatiable, an “intrepid amateur who found out how much he could get away with.'"