Boston City Councilor and mayoral candidate Annissa Essaibi George spoke to Radio Boston's Tiziana Dearing Thursday night about her positions on key issues in the race, and took listener questions, and shared much of her own personal story.

It was the second of two candidate town halls hosted by WBUR at CitySpace. The first was with Essaibi George's opponent, Boston City Councilor Michelle Wu. You can read highlights from that conversation here.

If you're a regular Radio Boston listener, you already know that if Essaibi George is elected Nov. 2, she'll be the first of many things: the first elected woman, mother, and person-of-color mayor of Boston.

These intersecting identities have been a key focus in this race between two very accomplished women.

You can watch the full conversation here: 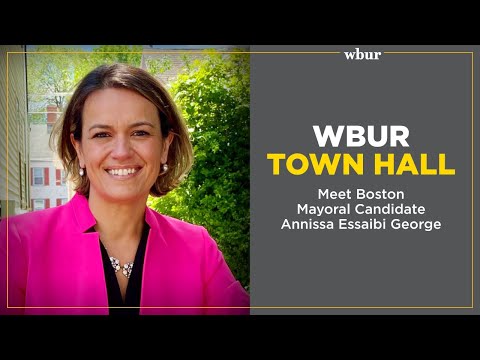 "To dismantle and to defund the Boston Police Department will not get us to that end result. We have to do this work together.

"Now, I will say around the fundraising bit [The Bay State Banner reports Essaibi George has received more than $150,000 in individual donations from police officers] ... I am very proud to have been born and raised in the city. ... So I will also say, because I have those relationships ... I've also been friends with individuals who've been incarcerated. I've also been friends with people who've lost loved ones at the hands of police. I'm friends with people who have been victims of police brutality. As someone who has been so invested in this city and the work of the city is important to build all of those relationships, and ... I'm also proud to say that I have received the most of all the candidates, if we go back even pre-preliminary, that I have the highest number of contributions from individuals who live in the city of Boston and work in the city of Boston and work for the city of Boston. And I think that speaks to my ability to build relationships.

"And I have had and I have not asked for the endorsement of the Patrolmen's Union, for example, because we aren't in a good spot in which I feel they are fully embracing the work that I'd like to see them do. Does that mean I don't have conversations with them? Does that mean we don't do this work together? I don't believe so.

"And in order to be an agent of change ... you need to have those relationships with those that we're asking to go out every single day, to work doubles every single day, to try to do their work in a very different way, when we think about the amount of reforms we need to put in place to make sure that we are also responding to the calls for social justice in our city."

"I've been doing the work, I've done the work, I look forward to doing more of the work. We rolled out an updated Mass. and Cass plan ... to build on our earlier release plan that's built on the work that I've done as a member of the city council. We need to decentralize services, meet people where they are, rebuild the Long Island Bridge and make sure that we are using all of our city's resources to get that done.

"I've committed $30 million of ARPA money to respond to the crisis at 'Mass. and Cass' that exists far beyond 'Mass. and Cass.' We think about Andrew Square, Edward Everett Square, Mattapan Square, Upham's Corner, Nubian Square, Downtown Crossing, we're seeing some significant increases in the North End, Kenmore — it is in every part of our city [that] we see 'Mass. and Cass' playing out.

"I will also call for a public health emergency at 'Mass. and Cass.' I will work with a designee through the Boston Public Health Commission that will work with me as mayor directly so that we can have a more coordinated response within all of our city agencies, both public health and public safety. We're drawing a 1-mile radius around the 'Mass. and Cass' area so that we can saturate ... that part of our city with the support and the help that those individuals who are struggling every single day need.

"And I've been calling for a long time for a public health surge in which we do that work. I am grateful — and I mean this, in all seriousness — that [acting Mayor Kim Janey] has duplicated some of my updated plan, has rolled it out through executive order ... because that work is so important and it will make it easier, literally — and I am not being fresh, I know some think it's a little snarky — so on day one of my administration, I can continue that work in a more meaningful way.

"We've got room in our shelters — and I understand our shelters in the city are not the best place for everybody, but we've got to move people into shelter. We've got detox beds available. We've got to get individuals into detox, but we have to make sure there is a connection to a longer-term recovery with that detox, because spin dry doesn't work. The tents also do not work.

"We've got to look at growing our number of single-room occupancies across the city that offer supports. We've seen some of the NIMBYism across our city to that. ... And we have to work with surrounding cities and towns to bring online supportive housing, to bring online shelters, because many communities have walked away from their responsibility to their people. And we need to take a look at statewide assets: closed nursing homes, closed hospitals, closed health care facilities that could do and participate in longer-term treatment. We also need to make sure that we're focused on workforce training, because one of the challenges right now is having enough recovery coaches and people in sort of those support services to help individuals who are in crisis."

"It is still too difficult — although it's being improved — to navigate the school system for kids and for families that we are embracing high school redesign and making sure that every one of our high schools is high achieving, that families don't feel that they have failed because they're not accepted to one of our exam schools. I was proud to teach for 13 years at East Boston High and what we've been able to do with our kids. ...

"We think about special education, the services and the needs of our kids. We have failed our kids, and the kids that we have failed the most are our Black and brown boys who are disproportionately placed in sub-separate special education classrooms. And that happens almost exclusively because we don't have literacy curriculum in the early grades across all schools.

"We need to help our kids achieve and excel. We need to give them the support services, the rigorous curriculum that they deserve in every one of those classrooms to to help achieve.

"Our kids, when they walk into school, should know that the city is proud of them, that the city is excited in them. The city wants to invest in them. We do that by making sure they're in great-looking buildings that are well resourced. And you do that by hiring a teacher."

This article was originally published on October 22, 2021.